The Archer’s Choice television show is the first to feature a husband-and-wife bowhunting team and the popularity of Illinois’ Vicki... 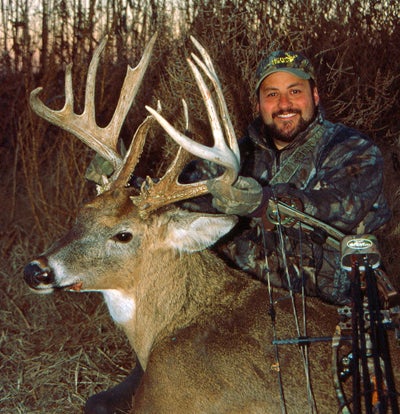 Ralph Cianciarulo's Top 5 "Vicki and I were eating our Thanksgiving dinner of peanut butter and jelly sandwiches on the tailgate of our truck," Ralph says. "We were talking about deer sign we'd found and where to place our Kansas tree stands. We chose a location between a large open prairie and a river, keeping the wind in our favor near some major buck sign. An hour in stand I decided to rattle, and from across the river came a tall 8-pointer looking hard in our direction, but seeing nothing he lost interest fast. Vicki was in a tree stand filming seven above me and spotted a huge buck that I couldn't see. She said to rattle and grunt, and when I did he just appeared from nowhere, walking right towards us. I knew he was big, so I never looked at his rack, and when he turned broadside I released my arrow. The Spitfire struck right behind his front leg. He took off toward the river and disappeared. It was getting dark, so we left him for the morning. I paced back and forth the entire night and the next morning I was holding my 188-inch buck that we call my PB & J Thanksgiving Booner!". Outdoor Life Online Editor
SHARE

The Archer’s Choice television show is the first to feature a husband-and-wife bowhunting team and the popularity of Illinois’ Vicki and Ralph Ciancarulo has grown with each season they’ve been on the air. Ralph is a long-time and top bowhunter, having owned one of the most successful archery shops in the Chicagoland area. Vicki shares Ralph’s hunting passion, and they are passing it down to their young son RJ. Here are their 10 top deer trophies.