My personal style has a flair to it that few can match. It’s very hard to duplicate what I create... 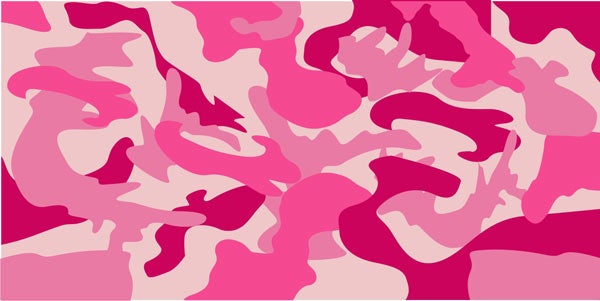 My personal style has a flair to it that few can match. It’s very hard to duplicate what I create on this body of mine.

As I write this, I’m wearing a festive holiday ensemble. Levi jeans ­– the same I wore yesterday while walking a piece of boggy hunting property that I wrongly assumed to be frozen over. It’s fine, now. They’ve dried.

My shirt is one of my favorites. It features a striking image of Buddy The Elf with his classic “I’m a cotton-headed ninny muggins” line across the chest. I am nothing if not joyful and triumphant.

That zingy duo is topped off with a baseball hat our lab often mistakes for a chew toy, leaving the bill a bit bitten and the snap-back inoperable. Because of the look I have described, I believe I’m especially qualified to comment on what appears to be the latest trend in hunting apparel: pink camo.

Once just a novelty, it would appear that pink-laden camouflage has suddenly become “legit” thanks to a bill working its way through the Michigan legislature.

The rationale behind the move is that it will attract more female hunters to the woods. Women are one of the fastest-growing segments of the hunting audience. I think that’s cool. I have no problem with it whatsoever. Yet I’m not sure what it has to do with pink camo. I’ve met my fair share of female hunters. To a person, they have all said the same thing: They don’t hunt because they’re looking for attention. They aren’t hunters because they want to be treated any differently. And none of them – not a single one – has anything positive to say about the pink camo movement. I find it odd that almost every #girlshunttoo, #huntlikeagirl and #havegunhearmeroar social tag I’ve seen has been posted by someone who isn’t a girl and/or isn’t really much of a hunter.

In fact, the women hunters I know view pink camo in much the same light as I do. It’s about fashionality not practicality.

Michigan’s legislators, however, wanted to welcome more women into the woods. And the best way to do that wasn’t a program designed to give single moms tools and resources designed to help them hunt with their sons. It wasn’t discounted hunting licenses or a series of hunter safety courses taught by female instructors. No, it was to allow pink camo to replace the traditional blaze orange.

See, this is why I could never be a politician. I just don’t know what the public wants. I would have assumed, as an elected official, I’d have more important matters to attend to. Some of them have just a few months left in office. Just a few short weeks left in which to leave their mark, to solidify their legacy as public servants. I don’t know about you but I’m not sure a plaque reading “Champion of Pink Camo” carries quite the same weight as one commemorating work that strengthened public education or helped to bring quality public services to low-income areas.

I wonder how much time, effort and public funds were used to create this much-needed palette addition?

I’ve seen social media posts and communications from non-profit conservation groups applauding the move and touting their involvement in seeing this critical measure through. They are incredibly proud of the hard-earned victory and I must admit, I was almost giddy thinking about what a terrific use of membership dollars it was.

In a tremendous showing of bipartisan cooperation, the uber-important bill has zipped through the state legislature and should hit Gov. Rick Snyder’s desk soon. Spokeswoman Anna Heaton told the Detroit Free Press she expects Snyder to sign the bill “as long as any concerns about hunter safety are addressed.”

I’m not concerned about the safety factor. Pink is plenty visible in the woods. That’s not the real issue here. What so many are overlooking, that one thing that keeps me awake at night, is this: Many hunters are now toting rifles and shotguns with composite stocks and stainless barrels. You simply CAN NOT mix pink with silver. Not after Halloween. Not unless you’re Lady Gaga (and let’s face it. . . none of us are).

We best get moving on another legislative package to address that fashion faux pas, before things really get out of hand.