Public-Land Pronghorns: Where and How to Hunt Antelope on a Budget 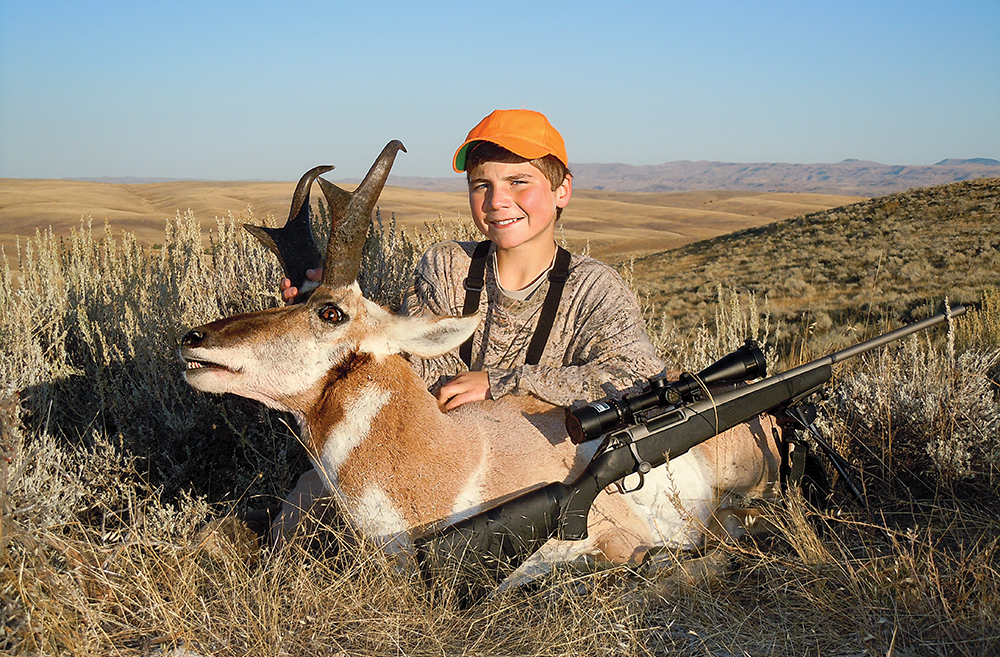 Stay low,” I whispered to my son Cole. “If those bucks see any movement, they’ll blow out of here.”

It didn’t help matters that we were hunting public-land pronghorns that had been pressured more than an elementary school spelling bee champion. Reaching our destination—a high, sagebrush hill—I motioned for Cole to crawl, and we both slithered to the edge for a look below. Two bucks were just finishing their morning fill at a small reservoir. Soon, hopefully, they’d pass below, unaware of our presence.

Cole eased the bipod-steadied rifle forward and settled in for the shot. Minutes later the bucks were within easy rifle range, and I whispered encouragement to settle his racing heart.

The sound of the bullet hitting home heralded a successful ending. This may sound like an easy hunt, but the public-land caper involved months of planning. In addition to several scouting missions, I secured landowner permission to access the rear of the public parcel with a sweat-equity barter. Anyone else hunting the area had to hike several miles to see the same vista.

For bowhunters, two states shine as top places for a public-land pronghorn hunt. The first-place honor goes to Wyoming, and here’s a spoiler: Wyoming is also the best state for a firearm hunt. The Cowboy State has more pronghorns than residents, and 50 percent of the state is in public ownership. Focus your efforts on Bureau of Land Management holdings and look to the southwest corner of the state for record-book trophies. If you don’t want to wait several years for preference-point support, the central part of the state brims with public-land units offering a higher percentage of success. Both the northeast and southeast also offer great hunting, but there are fewer public-land opportunities.

Although Wyoming is a top pronghorn state, you’ll still have to draw a license. Fortunately, the large number of units combined with lots of pronghorns increases your odds, especially if you avoid trophy units.

South Dakota gets the second-­place nod for bowhunting. Sure, it fluctuates between third, fourth, and fifth place for population density, but you can’t go wrong with a guaranteed archery tag. Combine that with fewer than 2,000 pronghorn bowhunters annually and a scattering of public land to create a quality hunt. You’re not restrained by units, so you can wander all of western South Dakota.

Look to the northwest corner and scout lands set aside in the state’s popular Walk-In Program, which opens up more than 1 million acres of private land annually, much of it in pronghorn country. Your backup plan should include BLM tracts, portions of the Custer National Forest, and three national grasslands—Buffalo Gap, Grand River, and Fort Pierre.

Rifle hunters should consider Big Sky Country. Montana ranks second to Wyoming in pronghorn density, and as you would in Wyoming, you’ll have to draw a tag to play. Rebounding populations help boost your odds of securing that tag. You can run across pronghorns consistently anywhere in the state, save for the northwest. Look to the eastern half of the state, with Region 7 as a focus. Not only does it hold some of the best pronghorn hunting, it includes 3.8 million acres of public land. That’s not counting the 2.37 million acres enrolled in the state’s Block Management Areas, which open private land to the public.

What about other states? Colorado has a high density of antelope but limited public lands in the unlimited archery permit areas of the southeast. Rifle licenses in the northwest require years of accumulating preference points. A waiting list for licenses in Arizona also keeps most hunters looking elsewhere, and New Mexico’s random draw requires the luck of an airline passenger getting upgraded to first class on New Year’s Eve.

Expect to Walk Far for Pronghorns

No matter where you choose to hunt them, know that public-­land pronghorns feel hunting pressure. You’ll need to walk into country not marred with roads. A good goal is to locate several parcels that don’t have roads within at least 2 square miles or more of their interior. The majority of Americans are out of shape—70 percent of them, according to government data—so you simply need to push past the crowd.

Don’t overlook rough country, either. Even though pronghorns prefer to lounge in open country, they’ll dive into canyons and hide on the edges of timber once hunting pressure peaks. I’ve seen that behavior in Wyoming and Montana. Pronghorns there have no aversion to hiding out in timbered openings at a slightly higher elevation.

Cole’s pronghorn was like that, but the feeling of public-land success made packing out feel effortless.

Hunt the Edges of Private Land to Shoot Public-Land Pronghorns

Alfalfa, wheat, and other crop fields on private land might hold herds of pronghorns for days at a time. But eventually pronghorn bucks cross back onto public land, giving the rest of us a chance. Here’s how to be ready when they do.

Scout early, even if that means burning vacation days before the season opens. What you learn could put you in perfect position to intercept the area’s biggest buck the minute the hunt opens. Pronghorns mingle, chase, and eventually cross fences onto public land. Identify their favorite crossings and note what time of day the antelope hit them. They usually use a low spot for crawling under fences (they don’t jump over fences like deer do).

Consider that few private lands go unhunted. Where will ranch hunters approach from? And more important, anticipate where pronghorns will flee to.

If hunting pressure doesn’t push bucks onto public land, thirst likely will. Many private fields don’t have water, but public lands, set up for cattle grazing, usually have ponds and pools—­antelope will travel a mile or more from private fields to find these water sources. If you find watering holes with lots of antelope sign, set up along a trail or at the water source itself.

The rut gets bucks moving too. From August through mid-October, bucks maintain territorial boundaries by making scrapes, scent-marking weeds with their oily cheek patches, and snort-calling while displaying atop hills and ridges. Watch a preseason buck all day and you’ll have him patterned for when it’s time to hunt.

If all else fails, lure the buck off private ground with a mix of calling and flashing a buck or doe decoy. I’ve seen pronghorns charge a half-mile to confront an interloper.