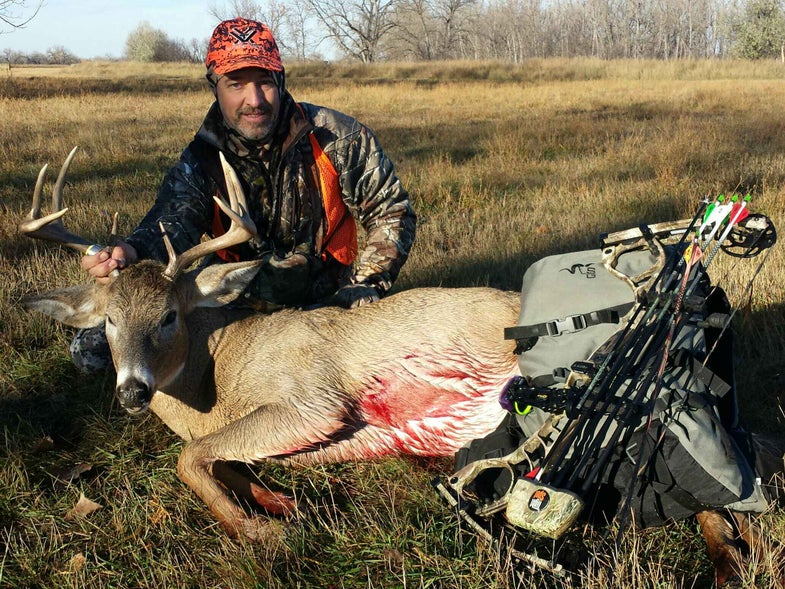 Things are heating up in Montana.

My buddy Curtis got into his stand early, but the wind wasn’t perfect for his setup, so he decided to still-hunt to another stand. As soon as his feet hit the ground, he glassed around and saw a good buck coming into his setup.

With nothing to lose and hopes of the buck missing his scent stream, he knelt in the tall grass and floated a few grunts. The buck responded and came in right away, only to catch Curtis’ scent at 60 yards.

“Ok, the grunt is working.” Curtis, who is used to hunting from his feet while pursuing Montana Mulies, carefully worked his way toward another stand about 500 yards away.

He glassed an open field and spotted two mature bucks milling about 150 yards away. With the only cover being a small ditch bank and the native grass, Curtis again kneeled, leaving his Stone Glacier pack on his back and his rangefinder in its pouch, and playfully floated a few soft grunts towards the bucks. Bingo.

They decided to come investigate, two mature bucks on a string. One buck was much bigger than the other, but Curtis would take the first one to offer a shot. Kneeling, bow ready, the smaller buck offered a shot in a rather small shooting gap in the tall grass at 25 yards. The arrow was away. Heart shot. The buck died within 30 yards. Pretty dang good for any bow kill, but this was Curtis’ first deer with a bow. Lesson learned: Light, less agressive calls from cover are working in the West.