At this time of year, finding walleyes is usually the hardest part of catching them. But if you tailor your … Continued 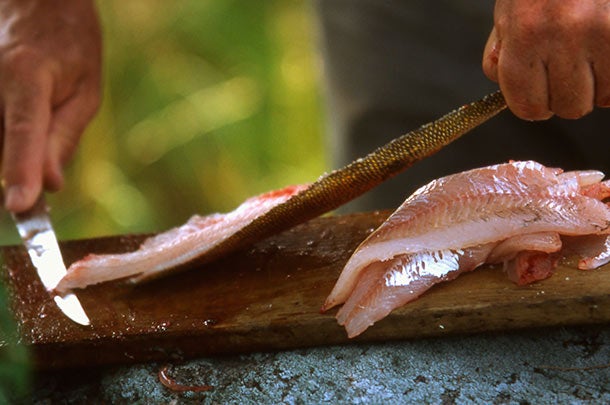 At this time of year, finding walleyes is usually the hardest part of catching them. But if you tailor your search methods to the water color and temperature, you’ll be on the biggest fish of the season in no time.

Spring can be the most rewarding time of year to fish for walleyes, but it’s also the most challenging. On the Great Lakes and across the Upper Midwest, for example, the two biggest problems are stained water from monstrous winds and icy water temperatures–a result of melting snow pouring into lakes from feeder rivers and streams.

Dirty water, typically a few degrees warmer than clean or off-color water, provides baitfish with warmth and visual cover from predatory fish. However, years of guiding experience has taught me that it is very difficult to catch any fish in what often amounts to a muddy mess. Inversely, the gin-clear water that takes on an almost Caribbean blue hue is nearly void of life, due in part to its cooler temperature.

Between the two is chalky water, which is off-color enough to hold a decent population of baitfish yet provides enough visibility to allow walleyes to feed. It’s the key to catching big fish in the springtime.

Chalky water can be hard to find since it doesn’t usually cover a large area, but it’s not as difficult as it used to be. Instead of driving around aimlessly in search of optimal water color, you can use new marine electronics to find critical clues such as temperature breaks. You can also use satellite images available on the internet to narrow down the hunt for the best places to fish (coast watch.glerl.noaa.gov/modis). The satellite images are especially useful given the speed with which water clarity changes–not only day to day, but hour to hour. It is not uncommon to make a trolling pass and then head back for another, only to find that the same area has changed to a completely different color, either cleaner or dirtier. Armed with this water-eliminating information, further pinpointing the fish-holding water becomes a simpler process.

Find the Spot On the Spot
Professional walleye angler Joe Okada of Fitchburg, Wis., has spent his adult life as a walleye guide and tournament angler, fishing more lakes in a year than most of us will fish in a lifetime. This experience has taught him some simple tricks for getting on big spring fish.
**
Weeds:** Emergent weed growth indicates the first sign of new life in many lakes and a tip-off to nutrient-rich areas that attract and provide cover for baitfish. This is also a signal that the water temperature is optimum.

Discharges: Culverts, water discharges, or power plants can provide the warmest water on the lake. These easy-to-spot locations are a great place to fish, especially early in the spring, when general water temperatures are still very cool.

Water Clarity: Water that is extremely dirty makes for a small strike zone. Instead, look for that in-between water–the chalk.

Direction: The north to the northwest side of the lake will always warm fastest because this section has more direct sunlight. It will be several degrees warmer on average.

Wind: A constant flow of water can have a river-like effect on a small lake. It delivers plankton for baitfish to eat, which causes walleyes to follow. Wind-blown points and bays promote food delivery and also provide enough chop to cover your tracks and keep walleyes from spooking in shallow or clear water.