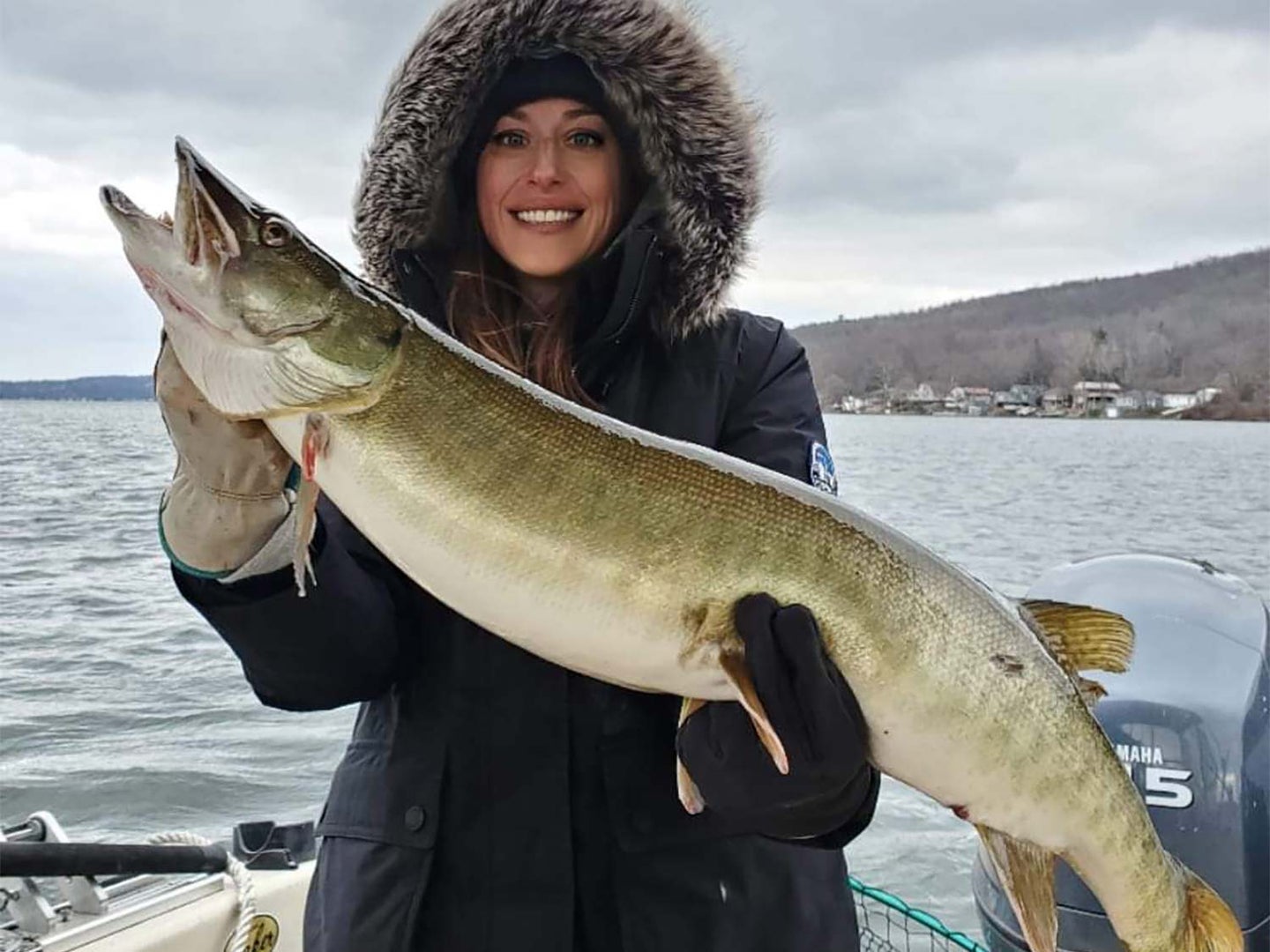 Catching a giant muskie is challenging—they’re called the fish of 10,000 casts because old timers say that’s how many casts it takes to catch one. These freshwater predators are moody, persnickety and can be frustrating to catch for even the most experienced anglers.

Katia Rivers, though, appears to be a muskie whisperer. The 39-year-old phlebotomist and EKG tech from Rochester, New York, and her boyfriend, Zach Baker, caught 81 muskies in 2020. That’s right, 81 muskies, on the Finger Lakes of western New York and some smaller lakes around those well-known waterways. Using the “fish of 10,000 casts” math, that would be 810,000 casts, but who’s counting. They fished on weekends, she told Syracuse.com writer David Figura, and stayed only on the inland lakes despite the allure of the St. Lawrence River’s big muskies.

“I have two secret weapons: Baker Musky Lures and a great net man,” says Rivers. “I’m still kind of processing it. It was an overwhelming, magical experience.”

Baker is the founder of Baker Muskie Lures and the Muskie’s Inc. chapter in Rochester. To say they’re dialed in on the big fish would be accurate. Rivers caught her first muskie six years ago on Lake Chautauqua. Her personal best is 50 1/2 inches, caught on Waneta Lake. She and Baker troll his handmade cedar crankbaits and release the muskies.

Muskies and northerns thrive in the deep water, vegetation, rocky habitat and ample forage of the Finger Lakes and smaller impoundments. Also, a couple of hatcheries managed by the New York Department of Environmental Conservation are located in the area, one on Chautauqua. Biologists in spring collect and fertilize eggs from wild fish, usually Chautauqua, for rearing and release in 14 lakes.

Rivers and Baker weren’t the only ones chasing muskies last year during the Coronavirus shutdown. Kevin Richards, field editor for Muskie Magazine, said more than 10,000 catch entries were made last year in its “Lunge Log” database. The magazine is the official publication of Muskies Inc., which has more than 6,000 members in the U.S. and Canada.

Rivers said her affinity for muskies has helped her overcome major surgery for ovarian cancer. She and Baker, and their two dogs, are out almost every weekend. They troll with 80-pound test line, 80-pound fluorocarbon leaders and Baker’s cedar lures.

“It’s an adrenaline rush,” she said. “Very exhilarating. Every single time it’s just like the first time you catch one. Usually it’s me sitting there reeling and reeling. It’s also been great therapy for me.”

New York’s muskie season opens on the last weekend in May.