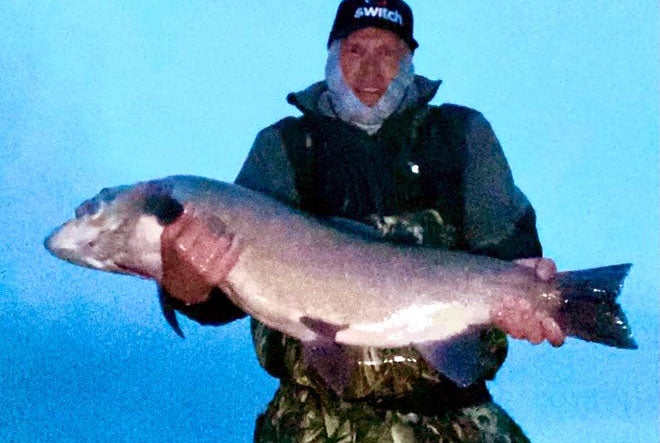 Quinn Pauly, a physician in Reno, Nevada, was fly fishing in Pyramid Lake on Valentine’s Day when he hooked and landed this giant Lahontan cutthroat trout. The fish was measured at 39 inches, but not weighed, and Pauly released it. The fishing gods already had bestowed a long life on the monster trout and Pauly didn’t want to offend them by harming the unique fish that was part of a 15-year reintroduction program.

Lahontan cutthroat trout live in the Lahontan basin of northern Nevada, eastern California and southern Oregon, according to the U.S. Fish and Wildlife Service,. Eleven lake-dwelling and 400 to 600 stream-dwelling populations existed in 1884 spanning more than 3,600 miles of streams. But the populations became fragmented and isolated and the species was listed as Endangered in 1970 and was reclassified to Threatened in 1975.

A restoration program was begun in the early 2000s with hatchery-reared fish. Pauly’s Lahontan trout caught from Pyramid Lake was a Pilot Peak strain fish reared at the hatchery in Gardnerville, Nevada. He could tell based on a fin clipped as an identifying marker. The Lahontan cutthroat historically migrated long distances to spawning sites; USFWS officials say the fish reportedly moved about 120 miles between Pyramid Lake and Lake Tahoe.

Pauly declined a chance to weigh the fish with a friend’s scale, superstitiously believing “it would make the fish gods angry,” he told the Reno Gazette Journal. He took a few photos and a video, measured the fish and then released it. It was his biggest in a decade of fishing at Pyramid.

“Some people said, ‘Why didn’t you kill it?’” Pauly told the newspaper. “I’m like, ‘What are you talking about?’ The fact some people would have killed it just makes me sick to my stomach.”

Jim Harvey, a retired Nevada Department of Wildlife biologist, told the Gazette Journal that based on the photo, the fish probably “is easily over 25 pounds, and approaching 30 pounds potentially.”

Lake dwelling Lahontan cutthroat could reach 50 inches and weigh 40 pounds, according to the USFWS website.