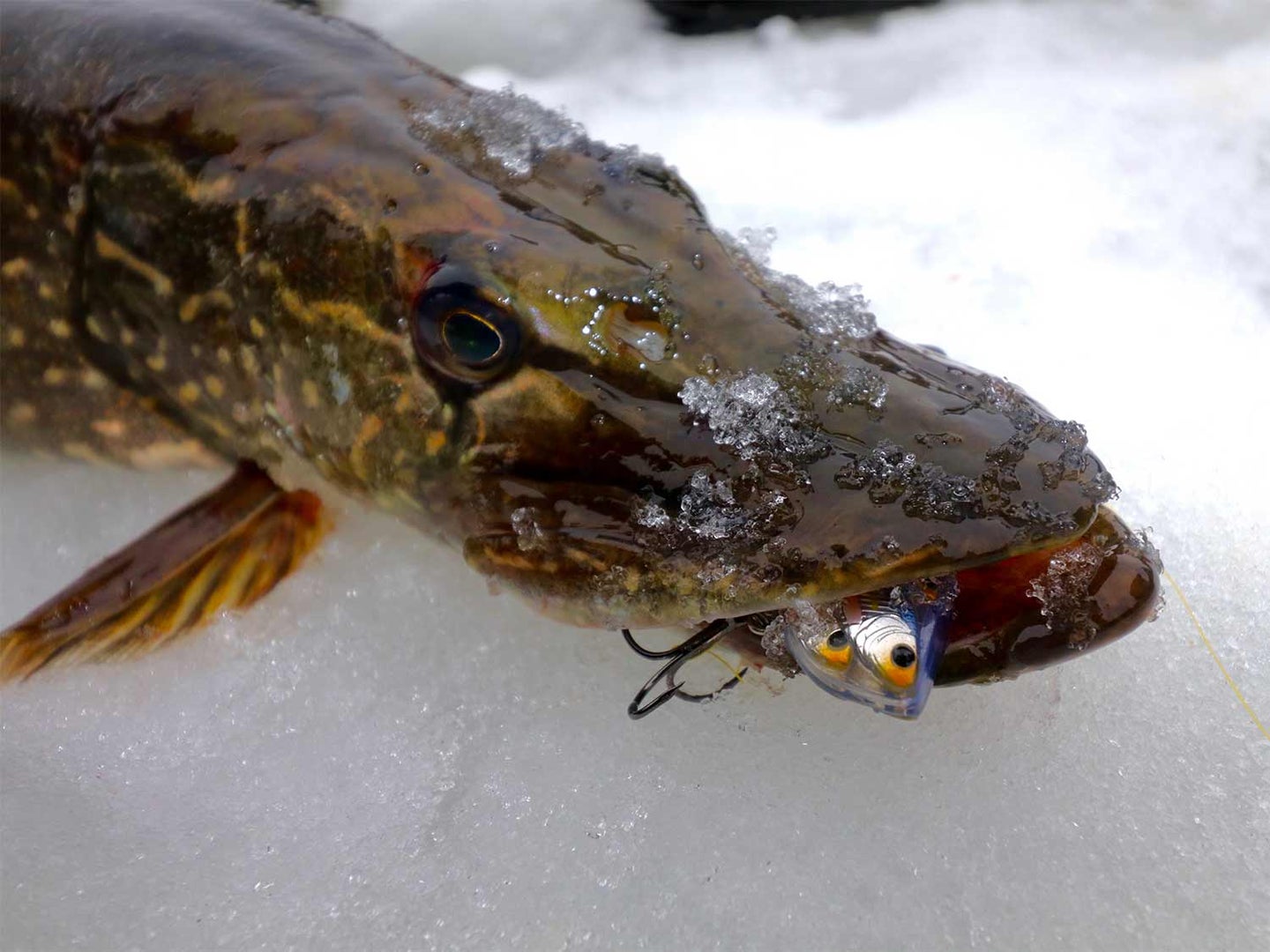 The first few weeks of walkable ice can provide some of the best ice fishing action of the entire hardwater season. For a short while, panfish and gamefish will linger in relatively shallow water, where remnant green weeds provide cover and ample forage. Dissolved oxygen levels beneath the ice remain high, promoting elevated levels of fish activity. Finally, angling pressure on those shallow fish is light, as many outdoor enthusiasts remain focused on pursuing winged or four-legged quarry in the fields and woods. This is truly one of the best opportunities of the year to pull oversized fish through eight-inch holes in the ice. But first, some precautions.

Traveling and fishing safely during the first ice period is paramount. Never venture out on less than four inches of hard, clear ice. As you walk away from shore, use an ice spud or chisel to frequently check ice quality and thickness along your path. Recognize that ice cover is rarely uniform on any given body of water, and small variations in thickness during the early season can make the difference between safe, walkable ice and hazardous conditions. Also, remember that snow cover will insulate the ice, making it grow slower than clean, snow-free ice. Accidents can happen when you least expect them, so be sure to carry a set of ice picks to pull yourself back onto the ice sheet should you fall in, and consider wearing a personal floatation device to keep you afloat if the ice underfoot gives way.

Pack light for enhanced mobility during the early ice period. Essentials should fit into a small sled or the base of a one-angler flip-over shelter. A lightweight hand auger is perfectly appropriate for first ice, and helps support a stealthy approach for shallow water fish. You’ll need some basic electronics, which could be as simple as a classic flasher, or perhaps a contemporary CHIRP sonar/GPS combo that combines fish finding with precise digital cartography. Supplement your fish finder with a pocket-sized underwater camera for immediate visual identification of both structure and fish. Bring two rods pre-rigged with different lures for each type of fish you plan to target, so you can switch between presentations without having to cut and retie. Pack a couple of tip-ups, especially if local regulations allow you to fish with multiple lines through the ice. A small box of lures and tackle, some live bait, and an ice scoop all belong on your sled. Last but not least, add cleats or another traction-enhancing device to your boots to minimize slips and falls on smooth, snow-free early ice.

We’ve had our safety briefing and the gear is packed, so let’s get after some first ice action!

Few species attract more first-ice attention than walleyes. These toothy predators spend much of the fall along shorelines, pursuing baitfish over weeds and rocks, and many of those fish linger near shallow structure and adjacent flats when ice first covers the lake. Now is a great time to target those fish, before they slide toward deeper structure and become less aggressive as winter progresses.

Best baits: The classic hardwater presentation for walleyes is a ¼ oz rattle spoon dressed with the front half of a minnow or shiner. Anglers pursuing oversized walleyes frequently use lipless rattlebaits or even big flutter spoons. Classic jigging minnow baits trigger winter walleyes that roam shallow flats, and when the bite turns tough, a live shiner or sucker minnow suspended beneath a float or a tip-up will bring walleyes topside.

Best spots: Walleyes use the outside edges of remnant green weedbeds as feeding highways. Rocky points that extend from the shallows into deep water will also attract and hold walleyes under the ice.

Best tactics: Drill multiple holes along a weedline or across a rocky point, and hop from one to the next until you locate bait or active fish on your sonar unit. Work artificial baits aggressively until walleyes appear on your electronics, then slowly raise those baits and impart subtle motions to trigger strikes. If regulations permit you to use multiple lines, consider a two-fisted approach of aggressive jigging with a rattle spoon with one line, while presenting a live minnow on a light wire hook through a nearby hole; walleyes will frequently be called in by the aggressive action and noise of the spoon, and then strike the vulnerable live bait.

A top pick: Upper Red Lake in northern Minnesota hosts one of the first early-ice walleye bites, as its relatively shallow basin locks up before many of the deeper walleye factories in the region. Work through one of the lake’s several year-round resorts for access and to ensure safe travel across Upper Red’s wind-blown expanse. Contact Rogers Resort and Campground at http://rogersonred.com/ for more information.

Jumbo yellow perch have characteristically high levels of activity during winter, and the early ice period finds these orange-finned tigers prowling shallow flats and weeds where they grazed during the fall months.

Best baits: Many of the best walleye presentations, when downsized one or two sizes, are very effective for jumbo perch. A 1/16 or 1/8 oz rattle spoon tipped with a minnow head is a good place to start. A quick-dropping, 5 mm tungsten jig packed with waxworms or spikes works well when pounded on the bottom. Undersized rattlebaits are effective in stained or cloudy water. Don’t overlook the simple effectiveness of a fathead minnow, hooked with a fine wire hook behind the dorsal fin, for triggering winter perch.

Best tactics: Mobility is the key. On an expansive weedy flat, spend time drilling out a large number of holes, and then quickly scan the array with your fish finder and aggressive jigging tactics. Don’t settle into one hole until it produces multiple fish. Be ready to move with the school, as perch will seldom remain in one particular area for long. Hole-hoppers will nearly always catch more perch than those remaining in one spot.

A top pick: The glacial lakes and ponds in eastern South Dakota are a hotbed of early ice perch action. Many of these waters experience boom-and-bust population cycles, so work through a guide or outfitter for the most consistent perch action. Capt. Eric Brandriet, http://www.dpangling.com/, is an excellent resource and guide for hardwater perch, walleyes, and more.

Read Next: Trick Out a Snowmobile to Turn it Into an Icefishing Machine

Crappies are one of the most popular season-long targets for ice anglers. Predictable locations and a general willingness to bite make crappies frequent guests of honor at mid-winter fish fries.

Best Baits: Small jigging spoons can be dressed with a small minnow or packed with spikes for consistent crappie action. A teardrop spoon with a lively minnow can be suspended beneath a float to trigger bites. Aggressive crappies can be taken with small rattlebaits; supple soft plastics rigged on micro jigs are also effective on active fish.

Best spots: You’ll find first ice crappies in two general locations: along the outside edges of green weedbeds, and suspended over the main basin of the lake, frequently in 25 to 35 feet of water. As winter progresses, those weedline fish will trend toward the basin, although many lakes host a low-light weedline bite all season.

Best tactics: Identify a high-probability weedline spot, like a point or an inside turn, and focus your efforts on crappies that collect there throughout the day. Basin crappies respond best to baits presented above them, so use your sonar unit to determine the crappies’ depth, and then present lures 2 to 4 feet higher than the fish.

Many life-long love affairs with ice fishing begin with bluegills. Abundant on many lakes and generally willing biters, bluegills are truly a worthy hardwater adversary for both experienced and novice anglers.

Best Baits: Unlike perch and crappies, bluegills are generally bug-eaters beneath the ice. A 3- to 4-mm tungsten jig dressed with a waxworm or a couple of spikes is a good place to start. A compact, supple soft plastic with lots of wiggling appendages will trigger bull ‘gills when rigged on a small jig. Finally, if you spend the summer casting flies to trout, don’t be afraid to drown one of your favorite nymph or scud imitations – icy bluegills will love them.

Best spots: Shallow flats that hold perch during early ice will also harbor gills. As winter progresses, small bluegills will remain in shallow cover, but larger fish will gravitate toward deeper flats. Schools of bluegills will frequently be comprised a single year class, so if you’re catching mostly smaller fish, make a move to try to locate a school of larger bluegills.

Best tactics: Subtle, quivering motions with the buggy bait held at the same depth or just above bluegills will trigger strikes. Rig your small jigs using a loop knot at the end of 2-3 lb ultra-thin fluorocarbon to reduce twist and minimize line visibility. Use a hyper-sensitive spring bobber to detect bites, as bluegills frequently inhale and then reject a bait with remarkable speed.

A top pick: The Madison Chain of Lakes near Wisconsin’s capital city is home to a quality early-ice bluegill fishery. Drop D & S Bait and Tackle a note at http://www.dsbait.com/ for a current fishing report.

Read Next: 2 Killer Late-Season Rigs for Big Pike Through the Ice

Pike are one of the few “warmwater” species that seem to be just as active and catchable beneath the ice as they are in open water. This is certainly the case for trophy-caliber pike, which spend the summer in deep water but are accessible during first ice in the shallows.

Best Baits: Lipless rattlebaits can attract curious, aggressive pike from long distances. A large white tube jig rigged on a 3/8 oz jig is also an effective artificial choice. However, most pike anglers will pursue their quarry using live or dead bait under a tip-up. Use a multi-hook quick-strike rig to ensure that the fish can be hooked immediately after taking the bait, which helps to reduce injury to the fish and facilitates a healthy release. Dead baits become more effective as the winter progresses.

Best spots: Deep weed edges are pike hotspots. In low-fertility lakes, look to long, rocky points with some sort of secondary cover, like a sunken tree, a fish crib, or several larger boulders to concentrate forage and pike.

Best tactics: Nothing beats the fun of a day spent chasing flags while fishing pike with tip-ups. Drop baits along deep weed edges, and vary the depths of the baits to determine what the pike prefer on any given day. Sometimes, baits set just a foot or so beneath the ice will garner the most pike attention. Separate the bait from the tip-up’s braided main line using 50 to 60-pound test fluorocarbon leader for enhanced abrasion resistance and to reduce line damage to large fish during the fight.

A top pick: The shallow bays along the southern shore of Minnesota’s Lake of the Woods host a fabulous, early ice opportunity for trophy pike. The lake’s many year-round resorts provide access and up-to-date ice conditions. Contact Arnesen’s Rocky Point Resort at https://arnesens.com/ for an early ice update.