Madness, Obsession, and the Hunt for the World-Record Tarpon

In his new book, “Lords of the Fly,” writer Monte Burke goes deep into a flyfishing cult 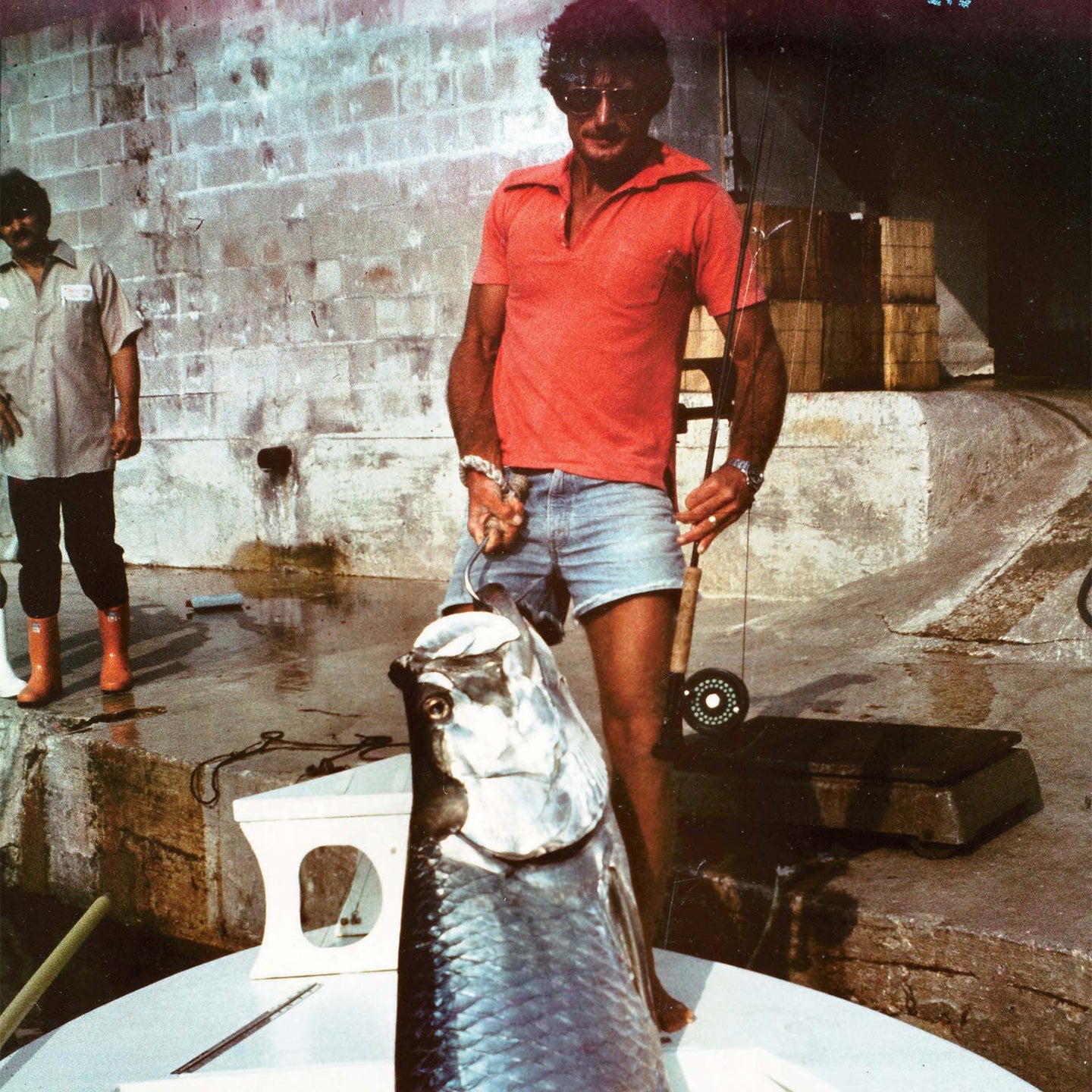 This story is adapted and excerpted from Lords of the Fly: Madness, Obsession, and the Hunt for the World-Record Tarpon, by Monte Burke. Fishing records is not a new topic for Burke. He’s also the author of Sowbelly: The Obsessive Quest for the World Record Largemouth Bass—easily one of the best and most entertaining works of lunker literature.

In Lords of the Fly, Burke takes a deep-dive look into the world of tarpon fishing and the town famous for it. In the 40-plus years since Tom Evans, a New York City stockbroker, first caught a world-record fish in Homosassa, Fla., in 1977, he has returned to the area and landed six more record tarpons in the surrounding waters. His success made this small town the hub of saltwater flyfishing in the 1970s and ’80s, and attracted professional anglers, such as Stu Apte, Lefty Kreh, and Billy Pate, as well as fishing enthusiasts including writers Jim Harrison and Thomas McGuane and landscape painter Russell Chatham. Burke wonderfully captures their stories as well as those of their unsung guides, detailing the alliances and rivalries. Lords of the Fly comes out on Sept. 1, 2020, but is available for preorder now . Till then, enjoy this sneak peek. —The Editors

Tom Evans was one of the few regulars at Homosassa who was not from South Florida, and he was the sole Yankee (at the time, he lived in New York City). He was not a famous angler, as Apte, Williams, Pflueger, Lopez, and Pate were. He was also one of the few who had an actual nine-to-five job. He felt he was viewed as a latter-day carpetbagger, a bit like an outcast, even though he was allied with the Keys-based guide, Steve Huff. And yet, early on, he and Huff—the former collegiate nose tackle paired with the wiry guide—were the team to beat in Homosassa.

They were on the water, idling out of the Homosassa River, every morning at 5:30. Even when other guides and anglers were up earlier, they’d often wait for Huff to leave and follow him out, because he knew how to navigate the tricky river and its mouth. Evans and Huff were nearly always the last boat in, as well, tying up close to eight at night. “It seemed like we never saw the dock in the light of day,” says Evans.

Every day was an endurance test for both angler and guide. “It was an athletic event. We’d kill ourselves, torture ourselves,” says Evans. “Steve never wanted to go back in until we were dead. That made him happy.” They were both on their feet for around eleven hours a day. Huff learned the flat slowly and painstakingly, one plunk of the push pole at a time, pushing into the fifteen- to twenty-mile-per-hour winds that always seemed to arise in the afternoon off the Gulf. He would never start the engine if fish were around, even if he and Evans were leaving for the day. Instead, he’d pole out of the area, which sometimes added another forty-five minutes to the trip home. “The tarpon were lying around, doing their thing. This was their house. It was disrespectful to blow them out,” Huff says.

They stayed out on the water even in the worst of thunderstorms—”some horrible shit,” says Huff—dropping a few anchors, hitting the bilge pumps, and lying down in the bottom of the boat like Egyptian mummies as waves crashed over the bow. The lightning and the thunder would “scare the hell out of us,” says Evans. But then it would inevitably pass, and the sun would come out and the water would go slick, and the tarpon would start pouring in. Evans always waited for his graphite rod to stop humming from the leftover electricity in the air before he picked it up and started fishing again.

Evans concentrated only on the biggest fish he saw on the flat, the Rocquettas, as he called them. In a string of tarpon, the largest fish were usually found two to three places behind the lead fish, or maybe two or three spots from the back of the line. If the fish were in a daisy chain, he and Huff observed it for a bit and would “look for the fattest face,” says Evans. When that one was identified, Evans cast the fly toward the tail of the fish directly in front of it.

When he hooked a tarpon, Evans immediately fell into a trance of concentration, getting into the flow of the fish, reading its body language. If the fish was leaping or on a blistering run, he did nothing but hold on to the rod. But as soon as the tarpon began to slow down, Evans pounced, trying to “own the head,” as he called it. He never pulled without purpose. Everything was done to keep the fish off balance. “Every fish is different. But they all tell you what to do if you pay attention. If you don’t pay attention, they can easily ruin your day,” says Evans.

That’s because of the second, third, or fourth wind that a big tarpon can get during a fight if an angler relaxes. “If you’re resting, you’re losing,” Evans says. “If you had a fish on for two to three hours, you were wasting the day.” He once had a tarpon landed, exhausted by the side of the boat after a thirty-minute fight, when a fellow Homosassa angler motored up and asked if he could use the tarpon for a film he was making. Evans said sure and handed him his rod with the fish still attached. It was 4:30 in the afternoon. At nine that night, the fellow angler showed up at a local restaurant and ran into Evans. The fish had revived and the man had fought it for another three hours and failed to land it.

In the evenings, during the first weeks of their trips, when they were still fresh, Evans and Huff would go for a four-mile jog after fishing, and then out to dinner. Back at the house, they would make new leaders, using a micrometer to ensure they were legal. One year, they went through six hundred yards of leader material. They tied and re-tied flies, reusing hooks from chewed-up flies.

But as the trips wore on, nerves began to fray, legs and eyelids grew heavy, and things started to go a bit sideways. They skipped the jog. Huff’s hands got stuck in a clench and went totally numb from poling all day. He slept with them over the side of the bed to try to get the blood back in them, and it still took forty-five minutes in the morning to get full feeling back. His fingernails grew at an angle toward the pole, and still do to this day. (Dale Perez, a fellow guide, had to get operations on both of his hands after years of gripping the push pole.) One evening, Evans went out to get a pizza. He came back, put the pizza on a table, and began to tie leaders as Huff tied flies on the couch. Suddenly, Evans got a cramp in his leg and pitched forward, falling onto the pizza and breaking the table in two. “Huff just sat there and didn’t say a word and kept tying flies,” says Evans. “There is no way humans can be civil with each other with no sleep.”

Huff was demanding, on himself and on Evans. He’s often said that if he ever writes an autobiography, it will be called Just Shove It, which works for both the poling he’s done for a livelihood and his lack of patience for bullshit. He has never been a yeller, like Apte was when he was a guide. But this was a team sport. He’d pole for forty-five minutes to get Evans in a position to cast. If Evans missed, Huff would remain quiet for half an hour, and then utter, out of nowhere, “Well, you f—ed that one up.” Sometimes when Evans missed badly on a cast, Huff would say, “That fly was closer to the fish before you cast.” He poled so hard sometimes that Evans fell out of the boat and into the water. They began to call the little casting platform on Huff’s boat “the launching pad.”

And yet, Evans loved it, even craved it. He had found a guide who was very much like a demanding football coach who brought out the best in him. “We were taking it all to the absolute extreme,” says Evans. “I used to get so excited out on the water that I couldn’t breathe.”

By the late 1970s, “the sky was the limit,” says Evans. “We were doing incredible things, hitting our stride, and I was excited because I thought we could do even more incredible things as a team.”

That, as it turned out, would not be the case.