3 Ways to Climb Into a Treestand

Setting up an ambush from a treestand is one of the most effective ways to hunt deer, so long as you can get in and out of it safely. 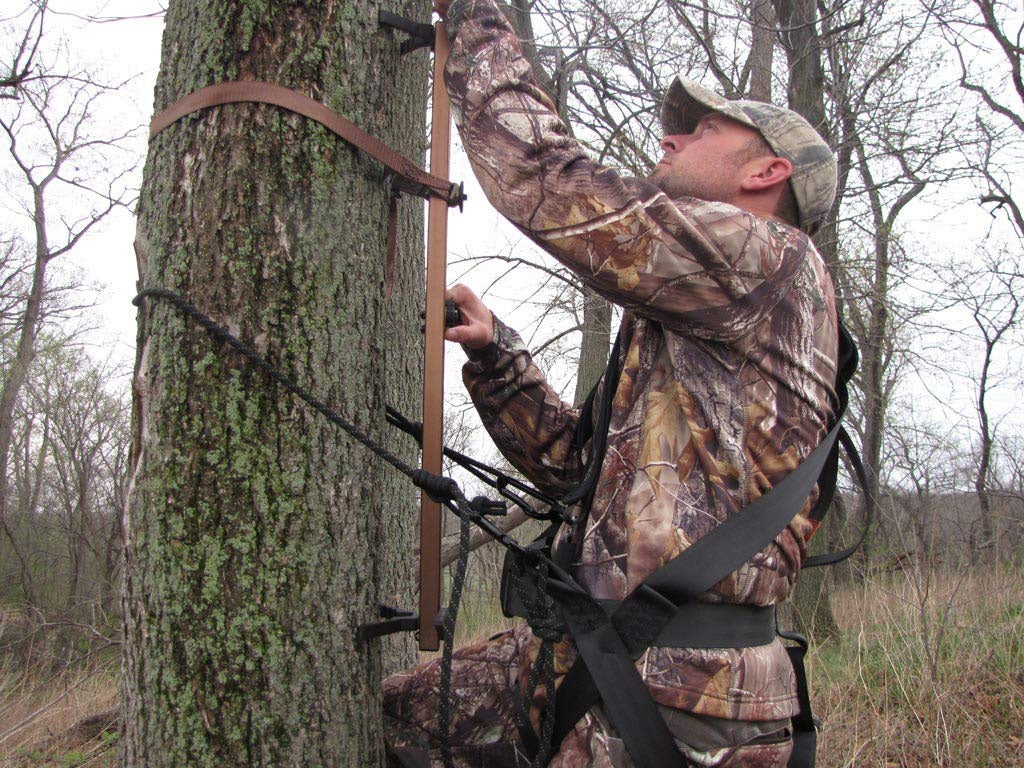 Climbing sticks or steps make it easy to get in and out of a treestand, though you should always wear a safety system to prevent accidents from happening. Lone Wolf
SHARE

When it comes to bowhunting white-tailed deer, hang-on treestands are one of the best ways to stack the odds in your favor. They are lightweight, portable, and compact, and when hung in advance of a hunt make slipping in and out of your stand virtually noiseless. But hang-on stands have one disadvantage: They require a separate climbing system. Fortunately, there are a plethora of options for ascending safely and quietly, ranging from modern climbing sticks to traditional screw-in steps. Here’s how to know which system is right for you.

Climbing sticks are state-of-the-art in hang-on stand technology. Sold as sections of three or four steps per stick, they allow hunters to ascend with a minimum of stick placements. With some systems, the bottom step can be dismounted at the end of every hunt if you are concerned about someone climbing into or stealing your stand. They are practically as stable as screw-in steps but bulkier, even though they will usually nest together for transport. Despite the expense, climbing sticks are probably the most popular system on the market today.

In addition to three-and four-piece hanging systems, climbing sticks are also sold as full-length sets meant to join together and lock onto the tree for rock-solid ascent. Full-length climbing sticks are less portable but a great option when your stand is, say, on the edge of a game trail or a field and may only need to be moved a short distance once or twice to zero in the hunting range.

Whether made of individual metal steps or loops tethered to a main line, strap steps combine the compactness of a screw-in with the ease of climbing sticks. They are simple to hang on all but the widest-diameter trees and don’t have the bulk of climbing sticks. They can feel a little spongy underfoot, depending on the strap or rope system used, but since most serious bowhunters own more than one stand, it’s good to have a couple different climbing systems. Some are more suitable to certain situations than others, such as climbing crooked trees. A single strap step can also be used to boost the height of climbing sticks when you just need an extra foot or so of height.

A properly installed screw-in step is as stable as the tree is strong. They are rock solid. However, because of the mounting time and effort involved, they are best used if you know the stand is going to be in one place the entire time. Screw-in steps barely give under foot and offer a sense of permanence and security. But there are downsides. They can get slippery in icy weather and require the most effort to install of any type step. Since they are almost invariably deployed before hunting a certain area, carrying a portable electric drill with an appropriate bit will go a long way toward making your stand hanging easier, particularly in hardwoods. Check regulations before using screw-in steps as they are not allowed everywhere and are sometimes prohibited on public lands.