Is the Military Really Buying Up All the Civilian Ammo? 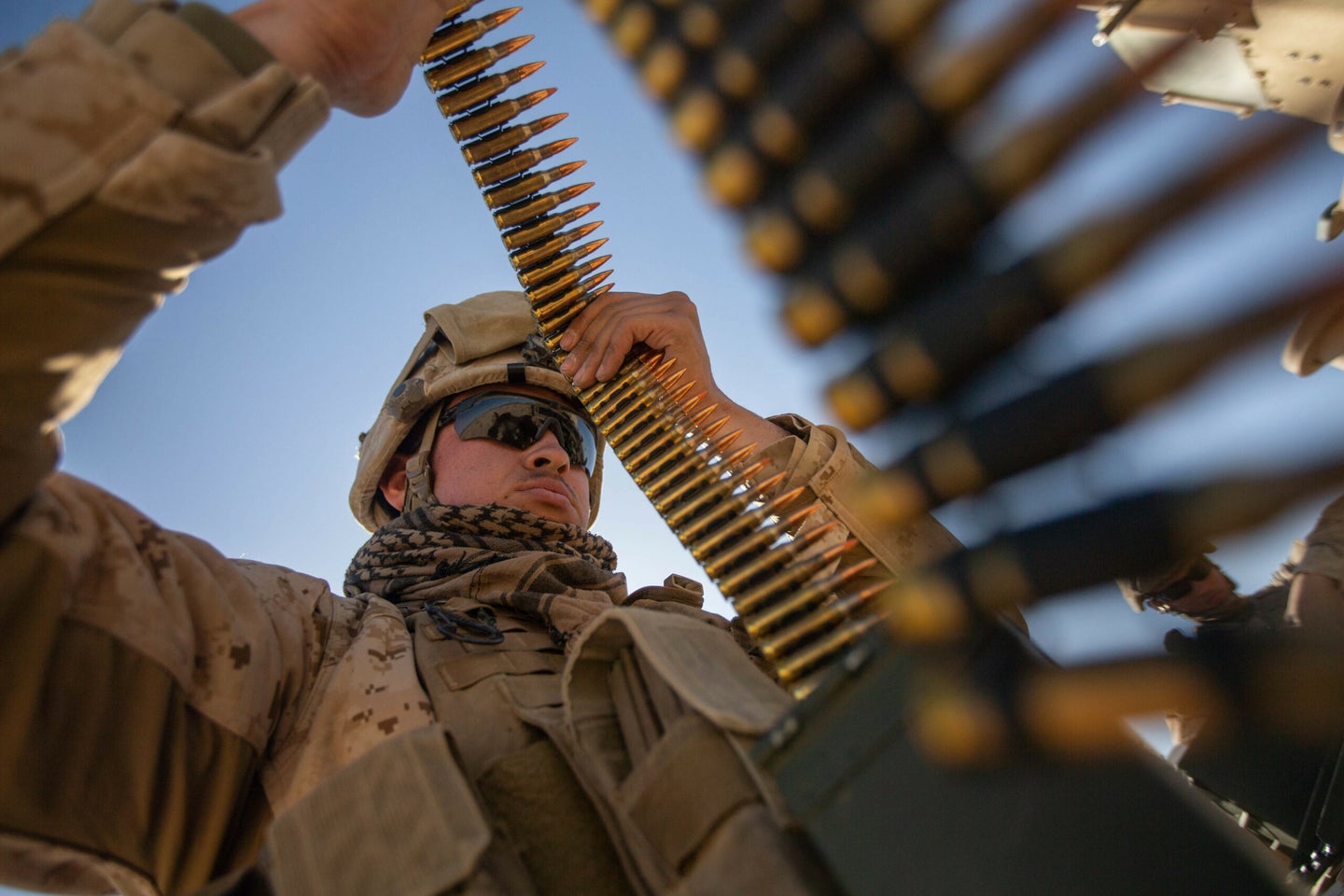 We’re as frustrated as anybody with the shortage of ammunition on retailers’ shelves. Compounding the frictions of supply (not enough) and demand (too much) are rumors that blame the dynamic on everything from deliberate price gouging to global shortages of the raw materials required to make metallic cartridges. One of the most frequent rumors is that the ammo shortage is our government’s fault. The claim goes something like this: Civilian ammunition was in short supply anyway, but then contracts for military and law enforcement agencies plucked inventory off retailers’ shelves and out of consumers’ grasp.

“When law enforcement or government contractors purchase more ammo, it’s when they hire more officers, and the one time they go through inventory is new-officer training,” said an executive at a major ammunition company, who asked us not to use his name because he wasn’t authorized to speak to the media. “You can relate any changes in law enforcement consumption to hiring policies in departments around the country. I don’t know if you’ve read the news lately, but with all the ‘defund’ conversations, departments aren’t exactly in a hiring boom. If anything, police officer numbers are down. You’re asking me if anything’s changed in the law-enforcement or military ammo world? Not a thing. The processes are the same as they were 12 and 24 months ago. There are no volume changes.”

The military’s big ammunition contracts don’t directly affect the civilian market because nearly all of those munitions, specifically 5.56, 7.62, .308, and other small-caliber rounds, are made at the military-owned Lake City Army Ammunition Plant in Missouri. By some estimates, LCAAP produces 4 million rounds of small-arms ammunition every day. In 2019, Winchester Ammunition’s parent company won a 7-year contract to operate the plant. The military administers its contracted production carefully, to ensure it will never run short on supply even if a new warzone or emergency flares up.

“The Army procures DoD small-caliber ammunition requirements from both its LCAAP as well as several commercially owned facilities,” says Bob Muth, small-caliber deputy product manager for the Army, which is the executive agent for small arms munitions for the Department of Defense. “The Army’s acquisition strategy is to allow the operating contractor to use excessive capacity at LCAAP to be used for commercial purposes strictly on a non-interference basis. All DoD orders take priority…which allows the Army to maintain a stable and ready workforce and equipment to address a surge in requirements if necessary.”

But just because DoD takes priority at the Lake City plant doesn’t mean that it’s stockpiling ammo to the detriment of civilian supplies. This is true partially because military ammo is mostly built on separate production lines.

“The LCAAP produces a majority of the DoD’s rifle and machine gun ammunition,” says Muth. “Military ammunition for the most part is built on production lines equipped to handle the tighter inspection requirements required by each military service.”

Sources noted that some relatively small runs of specialty ammo destined to fulfill government contracts are coming off production lines that also produce civilian ammunition, but it’s not a meaningful percentage of most commercial ammunition plants’ capacity.

But what about those stories you might have read about the military increasing its spending on ammunition? Isn’t it possible that the military is increasing its ammo buying so that civilians see a shortage? Technically it could be possible, and it’s here that the rumor-mongers have some traction. Most military contracts are written in a way that obligates companies that get the winning bid to produce much more ammo than is actually called for. So technically, civilian ammo production could be displaced by the military if the full extent of the contracts were called in. But that almost never happens and sources confirmed that it’s not happening now.

In reality, the way the military goes about budgeting and purchasing ammo is a predictably slow, boring process. Each year the DoD provides a 5-year snapshot of small-caliber ammunition needs. This forecast is incorporated into the president’s budget, which then undergoes approval and authorization and appropriations by Congress for a given fiscal year, says Muth.

“The general goal is to balance inventories with planned receipts and expenditures,” Muth says. “When discrepancies exist, a several year glide path is determined to fill or reduce inventories as required. This prevents large spikes or drops at the manufacturers that can stress the industrial base… There is no specific trend to rebuilding the Army’s stores outside of the construct above.”

Mark Combs can tell you the very day that the nation’s civilian ammunition inventory vanished. It was a Wednesday in mid-March last year—specifically, March 18—and he was checking the websites of his various distributors.

“This was just as COVID restrictions were kicking in, and people were getting uneasy about their personal security. Then we had riots,” says Combs, who has worked the gun counter at D&G Sports in Glasgow, Montana, for over 30 years. “Suddenly, people realized that nobody was going to take care of them, and ammo just vanished. I watched those distributors’ sites and one after another, whole SKUs of ammo just closed out. They haven’t come back since. People blame the shortage on the election, but it was happening way before that.”

Combs is one of the thousands of retailers around the country staring at empty ammo shelves—his gun rack is pretty bare, too—and fielding calls from as far away as Idaho and South Dakota. His answer is the same: “Nope. No ammo. Nope, I don’t know when we’ll get some. Thanks for calling.”

He hangs up the phone and looks across the counter at me.

But it can also be explained by the dismal science of economics and basic mathematics.

“This is a problem of our own making. Frankly, it’s just a matter of doing math to see how civilian gun ownership dwarfs everything else,” says Ryan Bronson, former vice president of conservation for Vista Outdoor, which includes Federal Premium, CCI, and now Remington ammunition brands. “America has around 1.3 million active-duty military personnel. In 2019, the last stats I could find, we had 697,000 full-time law enforcement officers. But something like 30 percent of Americans own guns. If you include all the new gun owners from this year’s surge, that’s around 100 million.”

Assuming the owner of each new gun purchased in 2020 then purchases 50 rounds—two and a half boxes—of ammo, that’s two billion rounds of ammo bought (and probably fired) in a single year. And that doesn’t account for ammo fired by the owners of guns bought prior to this year.

“You have to look at capacity in three parts,” says Bronson. “Capital, labor, and raw materials. When these companies are planning their production schedules, they’re estimating demand and then allocating those three parts. You have to figure out labor: Will you have enough people in the building? You have to figure out raw materials: Will you have enough powder and primers? The capacity of these factories, when running wide open, certainly can produce more than the industry can consume in a normal year. So there’s the issue of capital, and certainly for publicly traded companies [like Vista (VSTO) and Olin Winchester (OLN)]. They aren’t holding raw materials until they need it, because that’s overhead that can depress stock price.”

Most sources recount the bad bet that ammunition companies made in 2016, when they ramped up production in expectation that Hillary Clinton would win the presidency and enact sweeping gun control laws. When Trump won, they were left with inventory that they had to deeply discount in order to sell.

“You have American consumers who can make buying decisions overnight, but all those production considerations can’t change overnight,” says Bronson. “You can’t quickly bring people in to run shifts, and you can’t order raw materials quickly.”

The ammunition executive we spoke to noted that COVID-19 affected personnel.

“Shooters forget that ammunition is made by people,” said the unnamed executive. “We’ve had people out with COVID, and we’ve had to accommodate social distancing on some of our lines. In some cases, entire factories were shut down for months.”

He added another consideration that has compounded supply-chain inefficiencies: Walmart.

“Walmart is a big gorilla in the retail space,” he said. “When they decided to drop ammo sales of the most popular calibers [in 2019], then distributors had to find other venues. That took some adjustment that’s just now working through the chain.”

The other deficiency in the ammunition marketplace? The collapse of Remington Ammunition as a major supplier. Big Green went into receivership and then was broken into constituent parts and sold off. That will be changing this year, says Joel Hodgdon, marketing director of Remington Ammunition, which was purchased last year by Vista Outdoor.

“We’re very aware that Remington hasn’t been a player,” says Hodgdon, who talked as he drove to Arkansas to join the new Remington team. “But you’ll see Remington come back in the market heavy this spring, with increasing production after that. We know there’s a big demand, and we want to help fill it. We know there are millions of new shooters out there, and we want their first box of ammo to be green.”

“Predators always lag behind prey populations,” he says. “We’ve seen that in ammo, with these bubbles that grow and burst. We’re in a bubble again. Companies will ramp up to meet the demand in the bubble, but by the time they do the bubble will have burst. People feel that companies are being mismanaged, but this is an area where smart people are making prudent decisions and there was no way to anticipate this demand at this pace. It’s being sustained by unrest and the psychology of shortages. When a person feels things are in short supply, and sees ammo on the shelf, he doesn’t just buy the box. He buys a case.”

Bronson levels a challenge to conspiracy-mongers who blame shortages on government contracts.

“If you think it’s being driven by the military and law enforcement, then explain why reloading components and .22s are in short supply.”

At some point, consumer demand will slacken, manufacturers’ production will rise to meet the market, and there will be an equilibrium, however short-lived. Until then, what category of ammunition will recover soonest?

“Rimfire was one of the last ones to recover last time,” says the ammunition executive, “but the industry expanded and met the demand. I’m guessing rimfire will be the first to recover this time as a result. As for 9mm? I don’t know when that will recover.”

Back at D&G Sports in Montana, Combs shakes his head.

“This is the season we place our orders for summer and fall delivery,” he says. “Where I’d normally order two to three cases of a certain caliber, now I’m ordering 10, and hoping that I get one. I don’t know what else to do.”