How I Introduced My City Kid to His First Hunting Gun 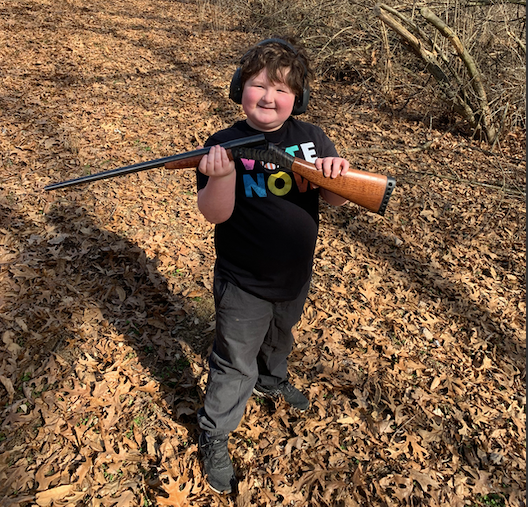 The author's son after his first time shooting a .410 shotgun. Joe Genzel
SHARE

My grandfather was an avid reloader. He would toil with rifle cartridges downstairs every night after dinner while my father and his siblings finished their homework at the kitchen table. Sometimes in the middle of their studies, a loud bang erupted from the basement and they would all gasp in panicked surprise. My grandfather built his own 25-yard range in the basement so he didn’t have to venture outside in brutal Illinois winters. He shot into a coiled lead catch that stopped his handloads from penetrating the concrete foundation, or a ricochet.

I tell you this story because that’s how many kids in rural areas grow up. Well, maybe their father didn’t have a rifle range in the house, but most country boys and girls are around guns and ammunition from an early age, and begin shooting when they are young. That makes them far more comfortable with firearms than kids in suburbia.

In the last few years, I’ve introduced my own son to his first hunting gun—an H&R Pardner .410. My family lives in a city of about 90,000 people where you cannot legally fire a gun inside city limits. My son, who is 7 years old, knows there are guns in our house, and has held many of them under my close supervision. But since we are city folks, he had never fired a gun until recently.

That’s a far cry from how my father’s generation—and much of my generation (I’m 40)—were introduced to guns. When I was a kid, my friends and I were allowed to shoot BB guns in the backyard while our dads tipped tallboys and grilled steaks. My father showed me how gun powder burned by dumping lines of it on our driveway and lighting it on fire from the lit end of his Marlboro Menthol. This all transpired while neighborhood kids played stick ball and rode bikes on the street in front of our house.

But that’s not how it works today. My son is learning to shoot much differently than I did. Since we live in an urban area, and in a time where gun culture is under heavy scrutiny, he cannot plink at empty soda cans behind the garage with a Red Rider. Living in the city makes it harder to get your kids comfortable with guns. So, I had to think of other ways to introduce my son to his first hunting gun, while still leaving him with the same confidence a farm kid, who grew up shooting guns, would have. It’s an ongoing process that will continue for years to come. Here is how I got him started.

Kids mature at different ages, and you have to take that into account before ever teaching your child how to shoot. I bought Don (my son) a .410 when he was 6 years old, but it was only to get him comfortable with the idea of owning his own shotgun and being responsible for it. He never shot it until I felt he was capable of handling the gun safely and following every direction I gave him, which took more than a year.

Work at Your Own Pace

Don’t feel like you have to go buy a gun and get your kid shooting immediately. There is no rush. Many of my hunting buddies who live in rural areas always ask me “is Don shooting yet?” Their kids already are because they have long been familiar with shooting. They have also had the opportunity to shoot more often (and see their mom or dad shooting guns) than Don has because of where they live. But, I alone decided when Don was ready. Don’t let any outsiders influence when your child takes his or her first shot.

If you have been hunting for decades, gun safety should be second nature, but your child needs it hammered into them (taking a hunter’s safety course with your child is a great way to get started). More important than the physical act of shooting a gun is handling it properly. Before I ever let Don touch his Pardner at the range, we go over the four golden rules of guns: 1) Always keep the barrel pointed in a safe direction, 2) Make sure the gun is unloaded, 3) Never shoot at something unless you intend to kill it, and 4) Wear hearing protection.

And since firearm safety is of the utmost importance, I will reiterate it again: Your child must be mature enough to handle a gun properly before shooting it. There is no way around that. If your kid is not listening or not taking the learning process seriously, STOP. They are not ready.

Before I bought Don a shotgun, I introduced toy guns and later a LaseLyte practice gun to get him familiar with firearms. I let him be a kid and have Nerf gun wars with his friends, but I also used those toy guns as a teaching tool. I would treat the Nerf gun like it was the real thing, and show Don how to use it in a safe manner. During these lessons he was not allowed to point the gun at anyone in our house, nor shoot it. We went outside on “squirrel hunts” with the Nerf gun and he was only allowed to pull the trigger when he intended to “kill” a squirrel.

The LaserLyte was helpful because every time Don pulled the trigger on it, a red dot would shoot out the muzzle so he could see where he was aiming and the point of impact. Once I felt like he was capable, I moved him up to an air-powered pellet gun and had him shoot at an old cardboard box, making sure he followed all the safety rules and only reloaded and fired when I said it was OK to do so.

Moving to the Real Thing

There are a couple things to think about before you purchase a gun for your kid. First, you want to buy a gun that has very little recoil. It’s best to purchase that gun many months before your child ever shoots it so he or she can become familiar with the firearm. There are a myriad of factors that come into play (age, weight, and size) when buying a youth firearm, but the best route to go is picking a platform you are most comfortable with. I grew up shooting shotguns, so I bought Don a break-action .410. Now, there is a little more recoil in that gun than an autoloader or pump, but Don is 4-foot-5, 110 pounds, so I knew he could handle it.

You may be more comfortable with rifles, so a rimfire might suit you better (the ammo will certainly be cheaper). But if you do go with a rifle, be sure to mount a red-dot optic because shooting iron sights is really hard, even for veteran shooters. And using a scope is also difficult for kids, plus they could scope themselves.

It’s very important to select a gun you know well, because you need to be an expert in terms of understanding how the gun operates. If your child has a question about the gun, you must be able to answer it. And DO NOT teach your child how to shoot with a handgun. The barrels are too short and it’s too easy to make a mistake with such a small gun. Kids are not ready to safely handle a pistol until they have properly learned how to operate a long gun.

Don’t Make It All About the Gun

When the time finally arrives that your child is ready to shoot, do not build it up or make a big to-do about it. Incorporate something that they enjoy before or after (both, if possible) they shoot. Don likes to fish, so I took him out to my parent’s farm to catch a few bluegills and said we could shoot his gun if he felt like it. I did not force the issue. After some hesitation, he made the shot. I said I was proud of him and that he did a great job. I didn’t get overly excited about it because guns are serious business. This isn’t your kid making the winning basket at the buzzer or hitting a walk-off home run. Of course you will be excited, but you also want to make it seem as though this was the anticipated result.

At the pattern board I pulled out one of those human outline targets police use to practice shooting because Don also likes to play shooting-themed video games with his buddies. I’ve seen him practice shooting on the same kind of targets in these games, and thought it would be comfortable for him to do it for real. Well, the human outline of the target freaked him out a little bit. He didn’t want to shoot at a target that resembled a person. I could tell he was about to back out so I said he could just shoot into the woods. That was a major relief for Don. Outdoor Life shooting editor John B. Snow suggested I go with a reactive target, like a ballon or even soda can, so Don could have a visual of what happens when he pulls the trigger and the pellets impact the target (the balloon pops or the can tips over).

Let Them Squeeze the Trigger

You can load and help your child mount the gun (I used a tripod to support the weight of the shotgun for Don), but I think it’s important to let them click over the safety and pull the trigger. I set Don up, and then stood behind him with my hand on his shoulder and was looking down the barrel of the gun, but the rest was up to him. If your kid can’t do these two things, they are not ready to shoot.

Don was so nervous that we had to stop a few different times and put the gun back on safe, but eventually he talked himself into it. He shot just once, and wanted to call it a day, which we did. It’s important to let your child set the pace in this area. It’s on you to prepare them and give them the opportunities to shoot, but it’s ultimately their decision when it comes to the number of times they want to pull the trigger.