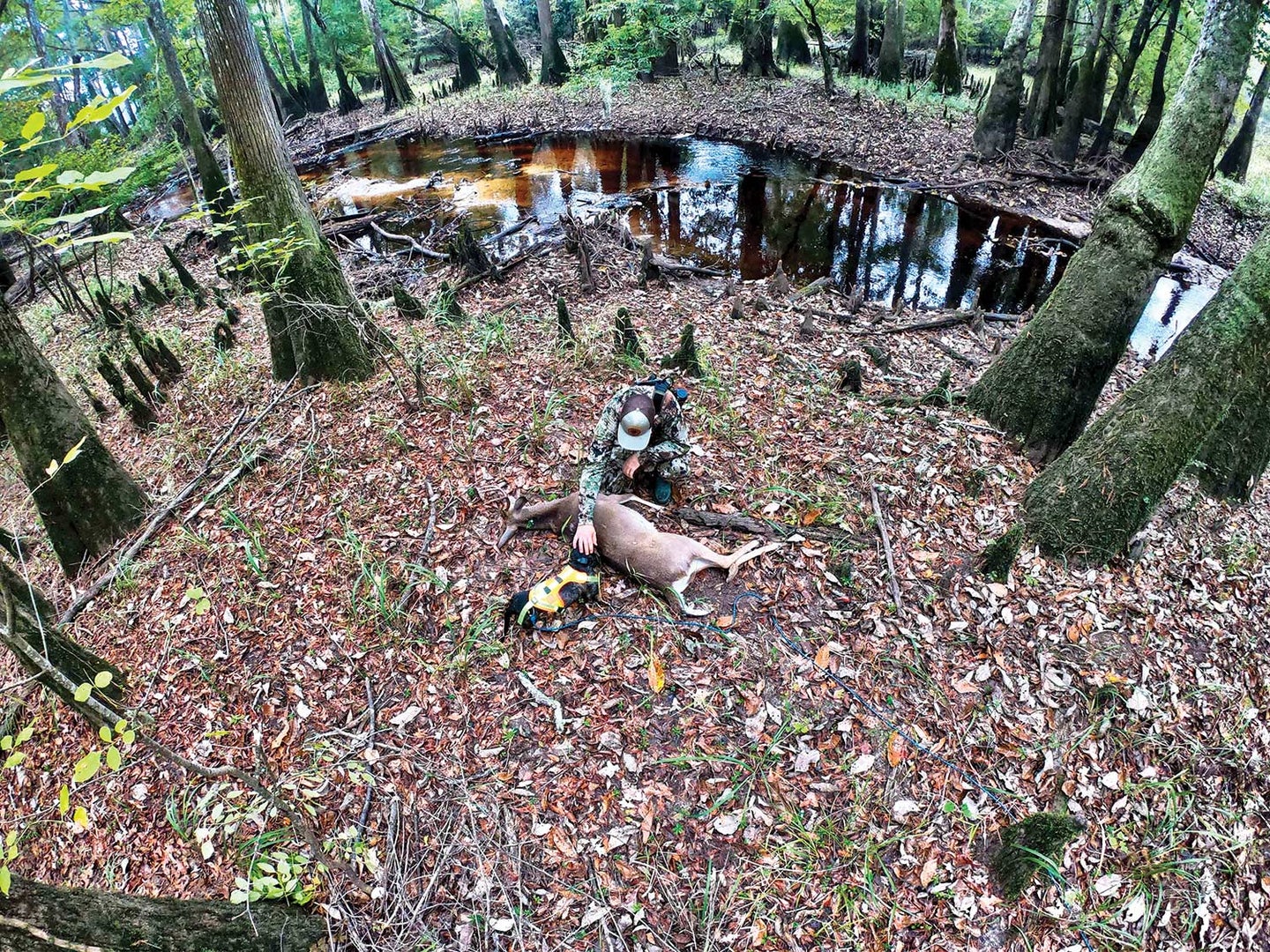 You know you hit that buck. You found blood and hair. You just can’t find the deer. You recall somebody—­somewhere—said with absolute confidence what wounded deer do. Was it Uncle Bill at deer camp or the farmer who gave you permission? Regardless, they said they knew exactly how deer behave after being hit by a bullet or an arrow. Their advice is echoing in your head, but daylight’s slipping away, panic is setting in, and you have no earthly idea where that wounded buck has run off to, or even how badly it’s injured.

It’s impossible to predict with absolute confidence what an injured animal does after being shot. Nobody knows that better than members of United Blood Trackers, a coalition of dog owners who use their specially trained dogs to track and recover wounded game, often for a price. Legal in 40 U.S. states, leashed-dog tracking has deep roots in the hunting culture of central Europe, where breeds were developed specifically to find game like red deer, fallow deer, and wild boar. Leashed-dog tracking didn’t become widespread in North America until the late 20th century, but since then, the practice has taught thousands of anxious hunters the unpredictable ways of wounded animals, lessons that often culminate with the recovery of an animal that would have otherwise been lost.

“I’ve been tracking with my dog for just two seasons,” says Damon Bungard of Tennessee, who uses his dachshund, Jager, to find deer and wild hogs. “He’s already taught me more about what wounded or marginally hit animals really do than I learned in 30 years of hunting.”

We humans may not have dogs’ prodigious sense of smell or their ability to process a complicated array of sensory cues, but we can learn from their accumulated experiences. Here are a number of lessons hunters can glean from leashed tracking dogs to ensure a wounded animal is recovered.

“There’s a difference between a poor shot choice and a poor shot,” says Al Sherman of Indiana, who tracks wounded whitetails and bears in the Midwest with his Catahoula leopard dog. “A big percentage of the animals we go after are the result of a poor shot choice, and that’s a bummer because we hunters can control that.” Sherman says the easiest way to recover game is to become proficient with your gun and bow, and then make a deliberate choice to take a high-percentage shot.

Tim Nichols, who tracks whitetails, bears, and moose in Vermont and the Adirondacks of New York with his Slovensky kopov, has been tracking with dogs for more than 25 years. He’s amazed at how many hunters simply fail to deliver a second or third ­killing shot. “Animals go down on one shot and people think it’s all over,” says Nichols. “They get cocky. Meanwhile the deer’s not dead. Anchor that animal. If it’s flailing around on the ground, shoot it again. I’ve seen people pose with their animal only to have it get up and run away before they start field dressing it.”

3. Do not underestimate a wounded animal

“Deer will do the weirdest things, even as they’re dying,” says Nichols. “They can go a few hundred yards or a couple of miles. They’ll double back or run in a straight line. A deer with a surge of adrenaline and the will to live will do whatever it takes to stay alive.”

Read Next: How to Train Your Dog to Blood Track Deer

Bungard has one rule he considers almost gospel: An injured whitetail, if able, will likely return to its bed-ding area to recover. “If you know where a buck has been bedding, it’s a good bet that’s where he’s going back to when he’s hit,” Bungard says. Trail cam data can be important. If photos confirm yours is a buck that’s been in the area and you know his bedding places, it’s logical to focus the search there.

You can find the Callie Chronicles here, on YouTube.

One of the biggest mistakes hunters make is not waiting long enough to start the recovery process. Pushed animals are harder to find. “Once you’ve shot, the best thing you can do is wait,” says Sherman, who suggests holding off at least two hours before starting a search. “So many wounded deer will bed up and die within 100 yards of where they were hit, as long as you don’t push them.”

If you have an obvious blood trail, you don’t need to call in a tracker to find the animal. But if you need a dog to recover game, do yourself and everyone else involved a favor: Trust the dog. “A dog’s nose is an incredible instrument,” says Nichols. There’s no established price for a tracking-dog’s services, but most reputable trackers are affordable, especially considering all the work that you put into getting the shot.