Practice patience during the rut, but during early-season whitetail hunts, you must move quickly and often 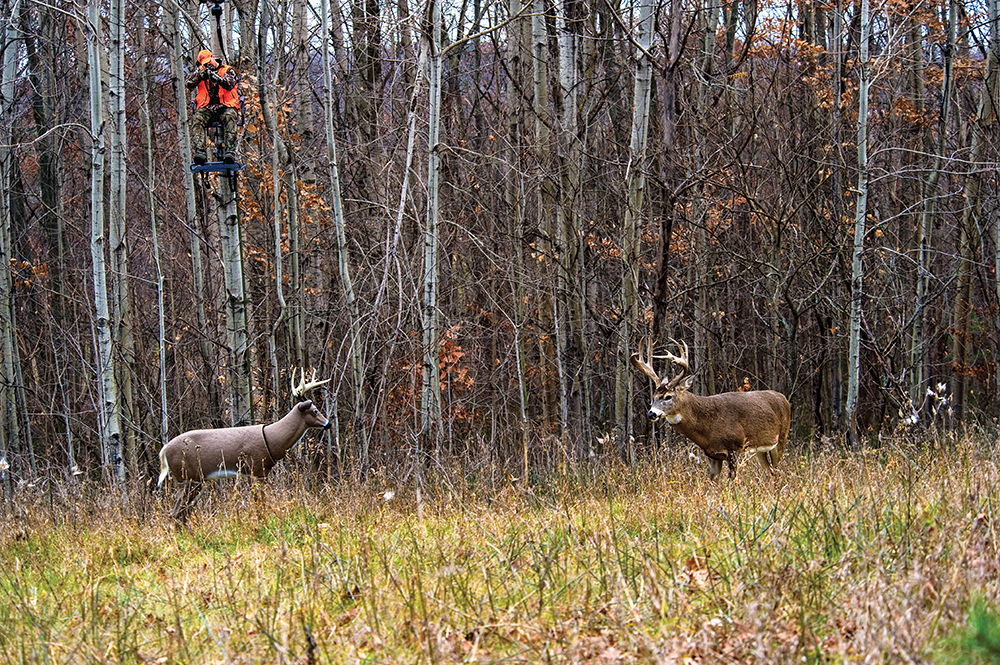 A stand swap to a field-edge scrape line is about to pay off. Mark Raycroft
SHARE

My buddies make fun of me. While I mess up plenty, it’s not blown opportunities, poor gear maintenance, or dumb decisions that result in the heckling. They make fun of me because I have a penchant for swapping stand locations more often than Nicki Minaj changes hairstyles. In my defense—I move because I must.

In the early season, a reluctance to change locations is a fast road to tag soup. Conditions change quickly—often overnight. Whether your season opens in September or October, whether you’re bowhunting or taking advantage of an early firearms season, flux is the norm. Food sources are shifting. Crops are maturing and being harvested. Acorns are dropping and being depleted. Rub lines pop up. Scrapes appear. The key to shooting a whitetail now is to observe and react. Here’s how.

Best Time to Be There: Afternoon or evening

Calls/Decoys to Use: A single feeding doe (or a pair) can help calm skittish deer reluctant to enter a field in daylight. Deer often congregate in one location no matter how big the field is.

Strategy: Bumping deer in ag fields at first light primes a spot for failure. Avoid morning sits until the rut draws near, and plan for a spook-free exit in the evening. Sloppy entries and exits educate a lot of deer in a hurry. Harvest timing and crop maturity can change patterns overnight.

When to Bail: Keep an eye on the beans. When they start to yellow, deer will move to fields that are still green or they’ll change food sources entirely.

Where to Go: When the fields dry up, head for the oaks that are likely dropping acorns and sucking deer into cover.

Best Time to Be There: Afternoon or evening (morning can work in certain situations)

Calls/Decoys to Use: None—using decoys in the tight quarters of a small kill plot this early in the season can have a negative impact.

Strategy: If you’ve positioned yourself near cover, this is one of those rare instances where a morning hunt is possible early in the season. You can catch bucks stopping for a bite as they head from primary ag food sources back to bed. In the afternoon, bucks will often stage on secluded food sources in daylight before heading to primary sources after dark.

When to Bail: If your plot is planted with brassicas but you haven’t had a hard frost, switch to hunt a more palatable food source. Brassica plots don’t see much traffic until after a hard frost. If you’re hunting clover or oats—prime early-season options—and sightings dwindle, don’t overpressure the spot.

Where to Go: Head for the acorns or a bedding-­area funnel if you know you’re on a good buck.

Best Time to Be There: Morning

Calls/Decoys: A few grunts can work if you see a buck and it’s not in range. But blind-call sparingly now, as the rut is still weeks away and you risk spooking mature bucks in the area.

Strategy: This is a high-risk, high-reward strategy. If you have trail camera images (or sightings) of a stomper buck and know where he’s bedding, slipping in well before daylight in an attempt to catch the buck as it returns to bed can pay off big. Use this strategy only after hunting the food source you expect the buck to be using in the evenings. Trail camera images can prove vital here.

When to Bail: If you don’t see or kill the buck during your first or second attempt, it’s time to get out. Pressuring a mature buck near its bedding area this early in the season can move that deer in a hurry—and permanently.

Where to Go: Try to locate a fresh rub line near a food source now. Set up near its core.

Best Time to Be There: Morning or evening, depending on conditions

Strategy: When acorns start to drop, all other food sources will go cold. The goal is to hunt those oaks the deer are visiting and that allow you to enter and exit your stand without detection.

When to Bail: When the stand you’re hunting dries up, it’s time to roll.

Where to Go: Head for another oak flat that’s still producing.

Best Time to Be There: Morning or evening, as per conditions

Strategy: Hunting soft mast is very similar to hunting hard mast—locate trees that are producing and dropping. Evaluate the ease of entry and egress. If you can access a stand site undetected before dawn, morning sits can produce. Otherwise, stay out.

When to Bail: Soft mast generally doesn’t last long once it hits the forest floor. When the fruit is gone, you should follow suit.

Where to Go: Stick to food sources—acorns first if they’re falling, followed by ag crops and food plots.

Best Time to Be There: Morning or evening, if stand entry is possible without detection

Calls/Decoys: If you see a buck that’s out of range, a few grunts are acceptable. Don’t blind-call. Buck decoys can pay dividends.

Strategy: Deer generally visit early-season scrapes after dark, and there’s plenty of science-based data to prove it. But scrapes positioned in cover near bedding areas are visited on the fringes of daylight.

When to Bail: Trail cameras will tell you if the scrape is active enough to warrant an early-season sit.

Where to Go: Hit the best available food source.