How to Butcher and Cook Wild Turkey Thighs and Drumsticks 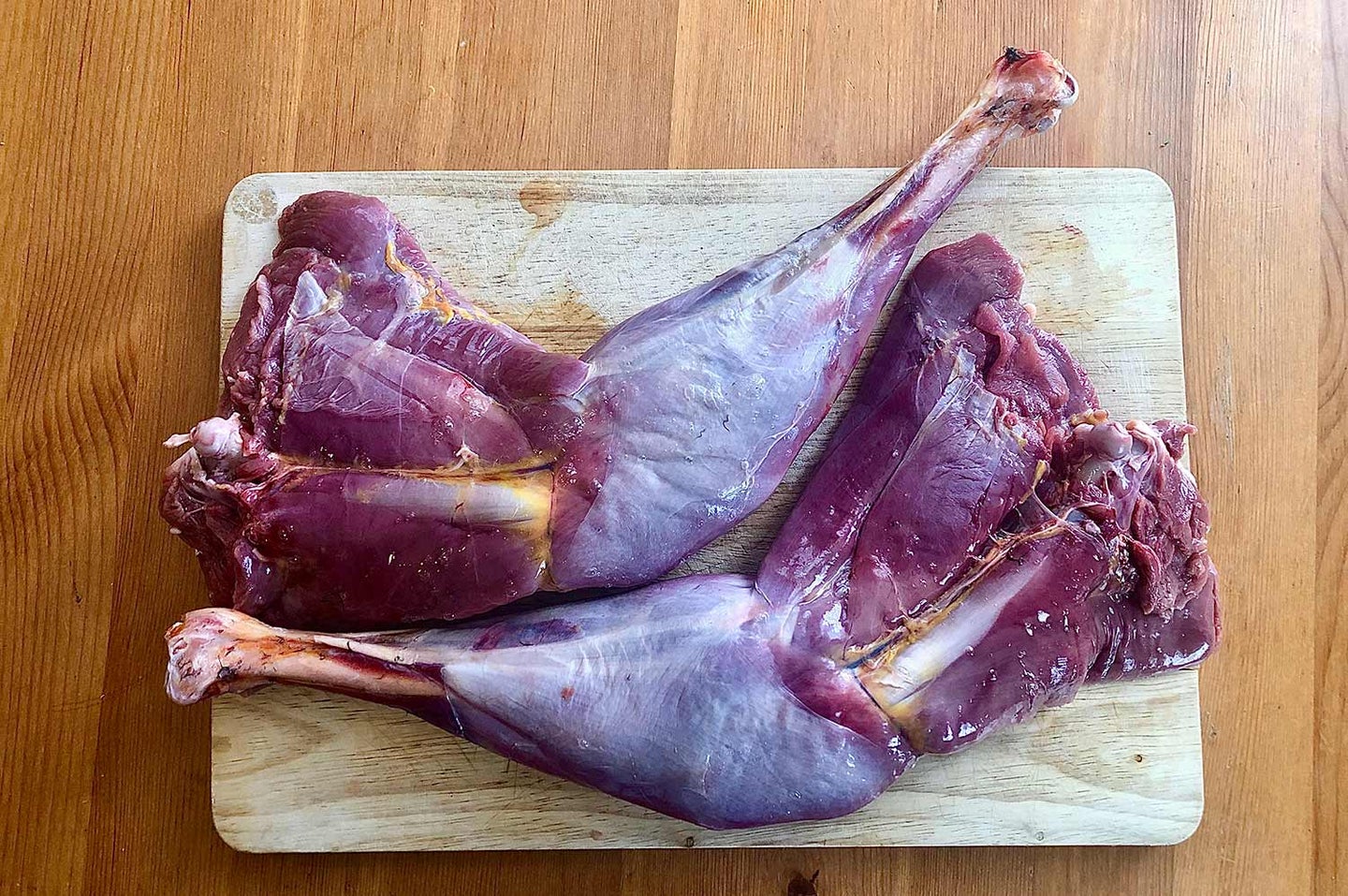 There's a lot of good meat on a pair of turkey legs, but you have to prep them properly. Alex Robinson
SHARE

If you’re used to Butterball turkeys, you’re going to be surprised when you butcher up the legs of a wild turkey. First, you’ll notice that the meat is much darker and most importantly, there are tough tendons running through the drumsticks and the thighs (though to a lesser degree). A wild tom spends his days walking, strutting, and fighting on his two legs and while that old gobbler is tough to hunt, his legs are even tougher to chew through—unless you know how to prepare them properly.

The key here is to separate the drumsticks from the thighs because they are anatomically different. The drumsticks have thick, heavy tendons running through them vertically, almost like the spokes of a bicycle wheel. No matter how you prepare the drumsticks, you won’t be able to cook down these tendons. So, you’ll need to shred the meat of the drumsticks. The thighs have tendons too, but they are not nearly as thick. If you slow cook the thighs, you can eliminate the chewiness of these tendons and wind up with delicious dark meat. The other benefit of splitting the thighs from the drumsticks is that two thighs or two drumsticks make a meal for two people (if you’ve got more to feed, you’ll just have to shoot more turkeys).

How to Barbecue Turkey Thighs

Let’s start with the thighs because they’re my favorite. My go-to method is to sous vide them and then finishing them on the grill. If you don’t have a sous vide cooker yet and you plan on eating a lot of wild game birds … get one. They’re not just for fancy French chefs. They’re relatively cheap, super easy to use, and they allow you to cook meat for a long time at a low, consistent temperature, which is key for wild bird meat.

Start by deboning the thighs. Simply fillet the meat off the thighbone and cut away the knuckle that’s attached to the meat. You can save these bones (and the other bones from your turkey) for stock if you’re really in to using all the parts of the turkey.

Next, give the thighs a good pounding with a meat mallet. This will help tenderize them a bit. Then season the meat with your favorite mix (I keep it simple with Montreal Chicken Seasoning). Now throw the meat in a vacuum sealed bag and drop it in a sous vide bath of 160 degrees for six to eight hours. This long cook in the sous vide will break down the toughness of the thighs without drying them out. When you pull the meat from the sous vide and remove from the bag, it’s not going to look very appetizing. That’s where the grilling comes in. Stoke up a super hot, fiery grill to sear the thighs. Keep in mind that the thighs are already cooked at this point and you DO NOT want to overcook the thighs on the grill. Over cooking will dry out the meat and undo all that work of the sous vide. Throw them over the flame for only long enough to sear each side—maybe a minute or two for each. Slather on your favorite barbecue sauce after the first side is seared (but if you don’t use Sweet Baby Ray’s you’re making a grave mistake).

The thighs will turn out crispy and saucy on the outside, and tender on the inside and have that smokey barbecue flavor from the grill.

How to Slow Cook Turkey Drumsticks

My favorite way to cook drumsticks is to simply throw them in a crock pot for for about eight hours with the crock pot on low. If you don’t let them cook for long enough, the meat will be rubbery. You’ve got to push past that stage until the meat is falling off the bone when you pull the drumsticks from the pot.

At this point, shred away the meat from the bones and tendons. Where you go from here all depends on how creative (or simple) you want to be with the shredded leg meat. To keep it really simple, you could just mix in some barbecue sauce, and throw the meat on a roll with some cheese and peppers for killer turkey sandwich.

You could follow this turkey enchilada recipe this leg salad sandwich recipe you’ve skipped the braising with the slow cooker, or even this ragout recipe just start at the point after the meat is shredded. You could even go all out with this wild turkey cheeseball recipe.

You can also make any soup or stew you could dream up for a chilly spring day. The point here is that you’ve got a pile of shredded turkey meat, and you can get fancy with it, or you can just break out the barbecue sauce and get to eating.