The Biggest Buck of the Season?

Bowhunter tags a 252-inch giant in the Buckeye State 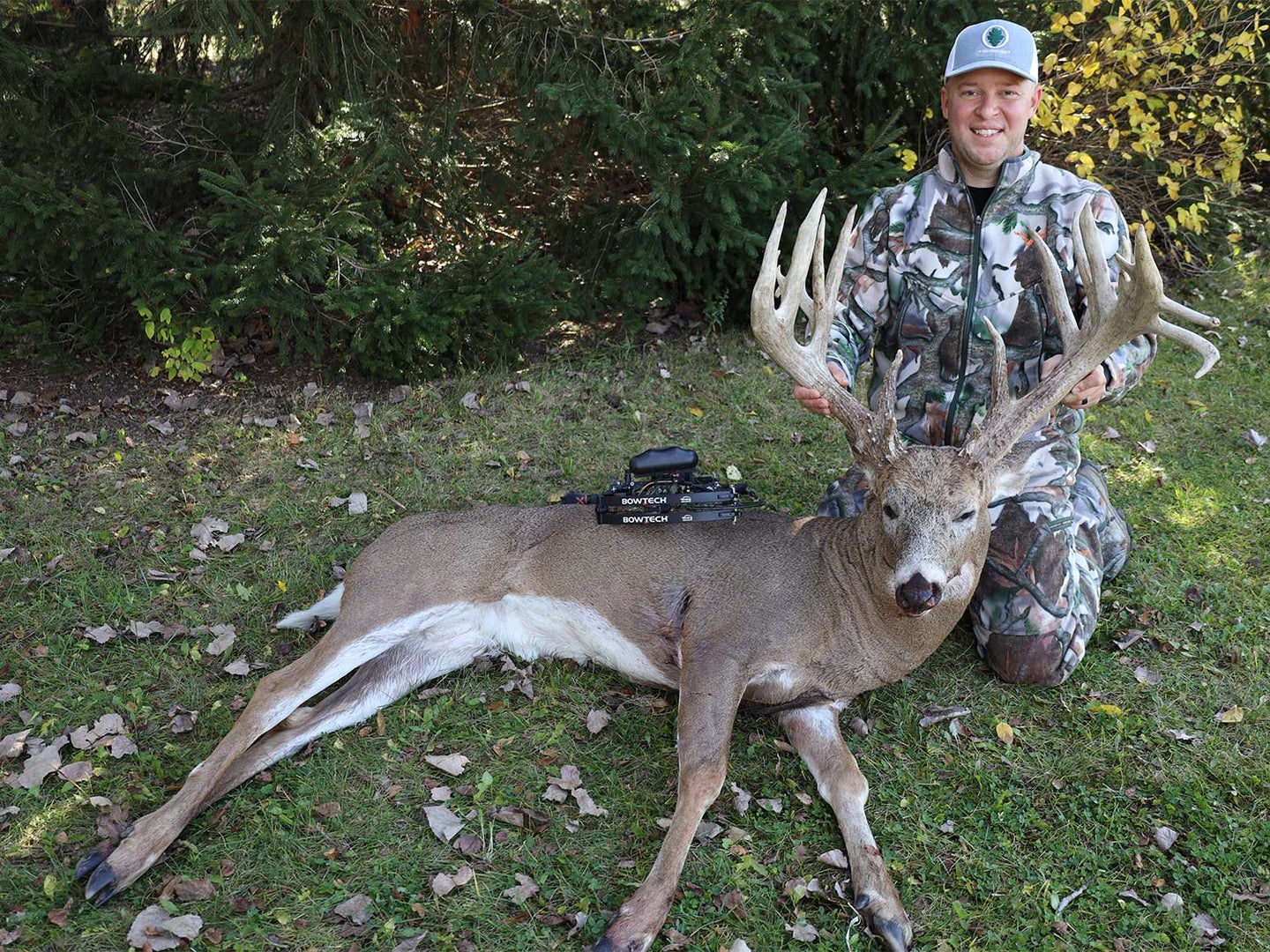 Matt Brunswick works as a K9 handler for the local Sheriff’s Department. But his hobby is killing big whitetail deer.

Unfortunately, this year, he lost one of the properties he frequently hunted. That spurred him to look for a new spot, and he’d seen big deer in—one particular area of Hancock County, Ohio.

“That made me target this spot,” says Brunswick. “I knocked on a door, met the owners, and they were kind enough to let me hunt their property.”

He immediately put out a trail camera. On July 3, his first card pull revealed a mega giant. The photo just showed the buck’s left side, which was really thick and almost appeared palmated. It reminded Brunswick of moose antlers, and so naturally he called the buck “Moose.”

“If you’re familiar with the Dan Coffman buck from Ohio, he contacted one of the wildlife officers ahead of time and let them know he was hunting a 300-inch deer,” Brunswick says. “I thought that was a good idea. So, I filled in a guy I train with who also has a K9 and works for the Ohio Department of Natural Resources (ODNR). He notified our local wildlife officer.”

He spent the remainder of the pre-season strategizing. The buck was very irregular, though, and didn’t have a consistent pattern. At least, not on the property Brunswick hunted.

Because of that, he almost gave up hope on the buck. Deer season opened, and he began targeting other, more huntable mature deer. Still, with a hope and prayer, he occasionally went after the big joker.

Read Next: An Ohio Hunter’s First Buck May Be a Record-Book Whitetail

The Dream Was Dying

“I honestly felt this buck wouldn’t be killable where I was hunting at,” Brunswick says. “July 8 was the last daytime photo I had of him. I didn’t get another picture until October 3. Then, once every 10 days or so, he’d pop up on camera at night. That was just enough to let me know he was still in the area.”

On the morning of November 5, he decided to go after a different deer. That plan didn’t pan out. Around lunchtime, he had an urge to go after Moose. The odds weren’t great, but anything is possible, and he opted to hunt the 6 ½-year-old monster.

“With only having nighttime photos, I knew he was not bedding on the property,” Brunswick says. “I figured that, if I was going to kill this deer, it was going to happen during the rut when he’s looking for does.”

Around noon, he slowly eased along a low-impact entry route, and finally made it to his destined treestand location. It’s a heavily-wooded area with thick cover on three sides, and an open field behind him.

“Where my treestand was, there was a blowdown which created a pinch point,” he says. “Deer had to come closer to my stand, which is why I sat there.”

It was unseasonably warm, but at least a south-southwest wind blew all unwanted scent into the open air behind him. Deer weren’t expected to come from that direction.

Soon after settling in, a doe and fawn walked by. They followed a trail through the timber that ran east to west. Several minutes later, a 4-pointer dogged a different doe right by the stand.

Then, he saw him. Moose walked directly toward Brunswick. He stopped to work a scrape, and then continued along the same path.

“I could see his ginormous rack and I knew exactly what deer it was,” Brunswick says. “At that point, I quit looking at him, picked my spot where I was going to take a shot, and kept watching out of my peripheral.”

The monster buck walked to within 20 yards, and turned perfectly broadside. Brunswick came to full draw, settled his pin, and let it rip. The arrow double-lunged the brute, and even nicked the heart. He only went about 15 yards and fell over in sight.

“I called my wife,” Brunswick said. “My first call was to her to tell her I’d shot Moose. She knows how important bowhunting is to me.

“As soon as I got off the phone with her, I called my friend who works for the ODNR,” Brunswick continues. “I wanted him to come out just in case there were any questions. He took pictures of my permission slip, hunting license, treestand, arrow, blood trail, and the whole nine yards. In my line of work, I’m used to documenting stuff.”

Then, he called his best friend, T.J. Brooks, who also came out and helped with the recovery.

After that, while awaiting everyone’s arrival, he got down out of his treestand, and went over to his deer. He didn’t grab the arrow, or move anything. He just knelt down, put his hand on Moose’s rack, said a little prayer, and waited for everyone to get there. It was a pretty surreal experience.

“I’m very fortunate that my family is extremely supportive of my bowhunting,” Brunswick says. “I was on rut-cation. This is something I do almost every year. I save a lot of vacation to hunt the tail end of October and first week and a half of November. I was actually on an 18-day stretch of not having to work, which is kind of nice.”

He attributes most of his success to clean entry and exit routes and hunting with the wind in his favor. Not putting himself on the giant buck’s radar paid off. And now he has a 252-inch Ohio buck to show for it.