Stay away from these sneaky plants, and you'll be much better off 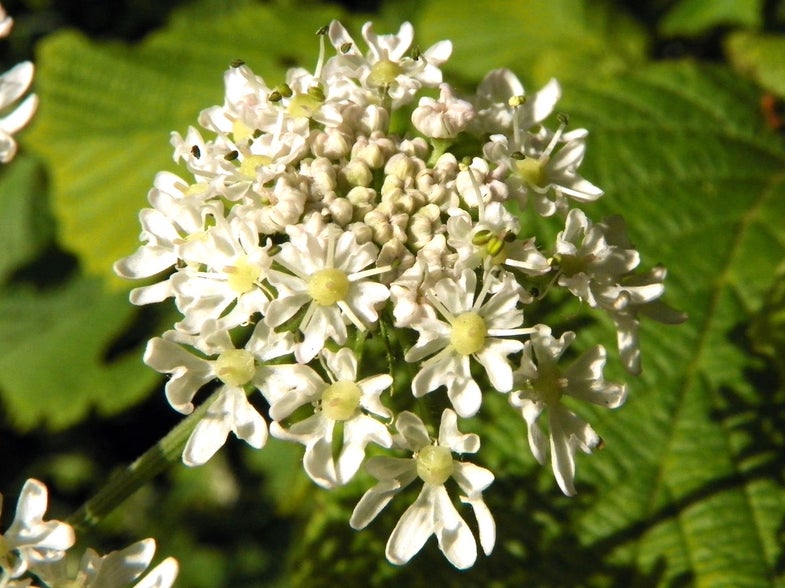 There are many wonderful, wild edible plants scattered across this continent. Pick up a foraging book or take an edible plant class, and you’ll see a multitude of plants that can turn into a meal. But this bounty doesn’t mean that every plant in the wild is our friend. Every region has numerous plants that are dangerous (even to bump into), and you’ll want to pay close attention to avoid touching these toxic species.

This large member of the carrot family may have foragers thinking they hit the wild carrot jackpot, but in reality, this is a plant that is harmful to even touch. Giant hogweed (Heracleum mantegazzianum) is a European native that is now considered a noxious weed by the federal government. This plant can reach heights up to 14 feet tall, and hairy stalks and white flower clusters closely resemble the wild carrot (also known as Queen Anne’s lace).

Giant hogweed is surprisingly dangerous, as it is covered in a compound that causes a severe light-sensitive skin reaction. Within 48 hours of contact, the plant causes dark, painful blisters that form after exposure to sunlight. These blisters go deep and result in scarring can last up to six years.

But wait, there’s more! Getting the “sap” in your eyes can cause permanent blindness. Stay away from this pretty wildflower. If you do touch it, wash aggressively with soap and water and stay out of the sun for a few days.

This plant (Toxicodendron radicans) is one of the greatest plant chameleons you’ll encounter in your travels. The same plant can appear to be a small herbaceous plant when young, then a small tree or carpet of vines when several years old, and a massive hairy vine after a decade’s growth. Contact with any plant part from this species will cause a severe rash on most people.

Burning any part of this plant will send the irritant airborne, which can cause even more harm.

Poison ivy contains a phenolic substance called urushiol, which is responsible for contact dermatitis in roughly two million people in the U.S. each year. For your best chance to stay out of this plants reach, remember the old saying “leaves of three, let them be.”

Unlike giant hogweed and poison ivy, stinging nettles (Urtica dioica) will hurt you right away, rather than causing a problem hours or days later. These plants can reach heights of several feet and grow in thick clumps or as solitary plants. This herbaceous perennial is found throughout the Northern Hemisphere, and touching the stalks or leaves can be very painful.

The plants are covered hollow hairs called trichomes, which are small enough and sharp enough to puncture skin and inject histamine and other chemicals that deliver a nasty sting.

Oddly enough, stinging nettle isn’t all bad. Young plants can be picked (while wearing thick gloves), then steamed, boiled, or fried as a delicious green. The sting goes away upon cooking. Nettles also show up in herbal medicine, and the fiber in their dried stalks can be twisted into very strong cordage.

Tell us about your worst run-in with any of these plants by leaving a comment.