Tips and Tactics for Catching More Slab Crappies this Spring 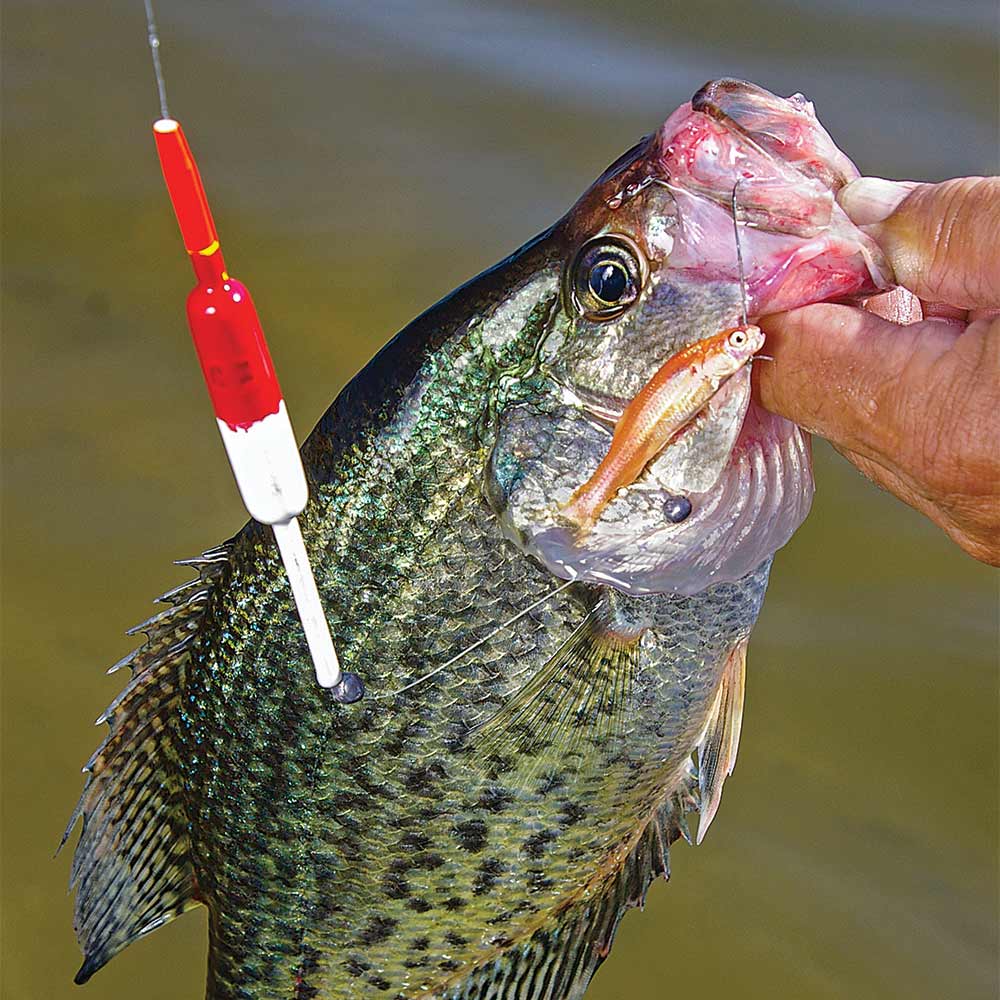 Crappie caught on a rosy red or pink minnow beneath a cork.
SHARE

The definition of “slab” crappie differs by region. For some anglers, a 1 1/2-pounder might qualify. For others, the title is reserved for crappies that bust the 3-pound mark. What doesn’t differ by region is that spring is the peak time to get slabs on the line. Jack Canady and Brandon Fulgham have a combined 50-plus years of guiding experience on two of the country’s most well-known slab factories, and their tricks will help you weed out the little guys fast.

Canady has been fishing for crappies for more than 40 years. Although he primarily leans on spider rigging from his boat, he knows that spring pre-spawn and spawning periods also offer shore-based anglers their best shot at slabs, and to catch them, being versed in long-pole dipping is a must. From March through early May, the fish will congregate in heavy cover, particularly brush piles, in relatively shallow water. Some may be reachable from the bank, but others will require wading, and a dipping approach allows you to get very close to the structure and lower a jig or live minnow straight down vertically into its heart. The trick to being effective is “going shopping,” as Canady puts it.

“Dipping is an old-time technique that requires nothing more than a 10-foot pole, a spinning or a baitcasting reel, and a bobber,” Canady says. “Dip the minnow or jig from one side of the structure to another. The key is dropping in tight cover without getting hung up. Move around the brush pile. If you keep hooking smaller fish, find another spot. Experiment with jig sizes and colors, and suspend the bait at different depths to locate the big fish.”

Landing a big slab with a long pole takes some finesse. Canady says if the bobber moves even slightly, assume the bait is in the crappie’s mouth. When you set the hook, don’t swing hard. In spring, runoff from feeder creeks and rivers often makes shallow shoreline areas of Kentucky and Barkley lakes muddy. If he’s not using a minnow on a hook, Canady typically dips skirted tube-style jigs weighing 1/16 to 1/8 ounce. He says dark colors such as a black-and-chartreuse combo and olive are top producers in stained to dirty water.

Fulgham is a lifelong crappie angler who’s been guiding professionally for more than a decade, and his home base of Lake Grenada is a particularly excellent destination for anglers with the singular goal of landing a true trophy slab.

“Sometimes I’ll get clients who don’t care about numbers. They just want the 3- to 4-pound fish,” Fulgham says. “We might not catch as many on those trips, but it’s very rewarding to help clients reach their trophy goals.”

One reason why Grenada grows fish so big is that the winters aren’t overly harsh in Mississippi. According to Fulgham, that equates to a longer growing season. Although he can find slabs year-round, spring is king, and spider rigging is Fulgham’s technique of choice. This method of slow-trolling with up to 12 rods allows him to present minnows and jigs throughout the column while covering lots of water.

“We start in very shallow water—maybe 1 to 3 feet deep—and ease our way back to deeper water,” Fulgham says. “If we’re not finding the size we want, I might go as deep as 20 feet. Giant crappies are usually staged deeper and are more solitary than smaller fish.”

Fulgham typically begins with just a minnow on a hook, though he might pin his minnows on 1⁄4-ounce skirted jigs to add color if he’s not getting many bites. He keeps his boat speed around 0.5 mph; however, he’s not afraid to give the throttle a nudge when the going’s rough.

“When the bite is sluggish, a lot of people like to slow down,” he says. “I do the opposite. I’ll speed up a bit and try to trigger the fish’s instinct to hit.”