The latest ammo introductions for hunters 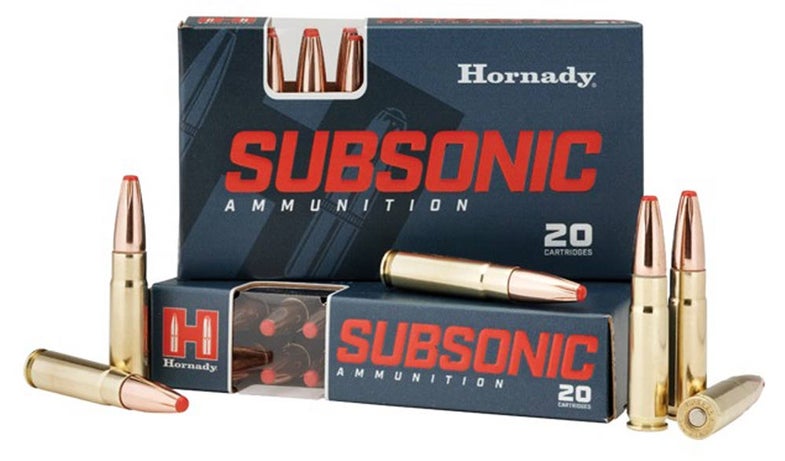 This year’s SHOT Show was a year of mild, yet pleasing, ammo line extensions, improvements, and additions. No real showstoppers cropped up, but a few ooh’s and aah’s were forthcoming. Here’s a look at my top picks, in no particular order. 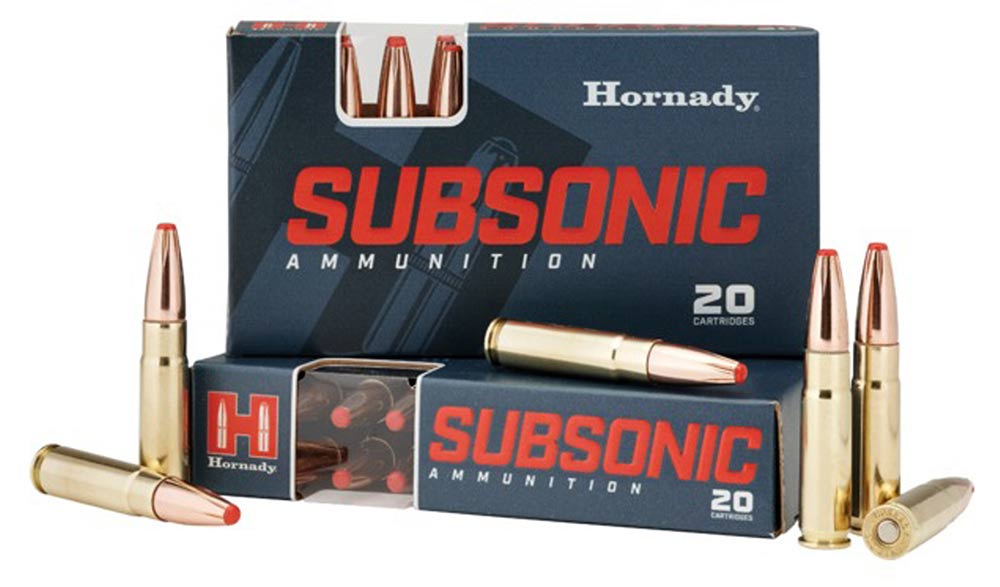 Hornady is a veritable giant in today’s world of ammo manufacturers, and you’ll see several of their offerings on this list. They produce quality ammo, and this new subsonic ammo will be no exception. The 190-grain SUB-X leaves the muzzle at 1,050 fps, retaining 900-plus fps (the velocity necessary for the SUB-X to expand) to a rather surprising 300-plus yards, a product of traveling below the speed of sound where vibration and resistance is minimal. This load is perfect for thumping hogs below the sound barrier. Hornady 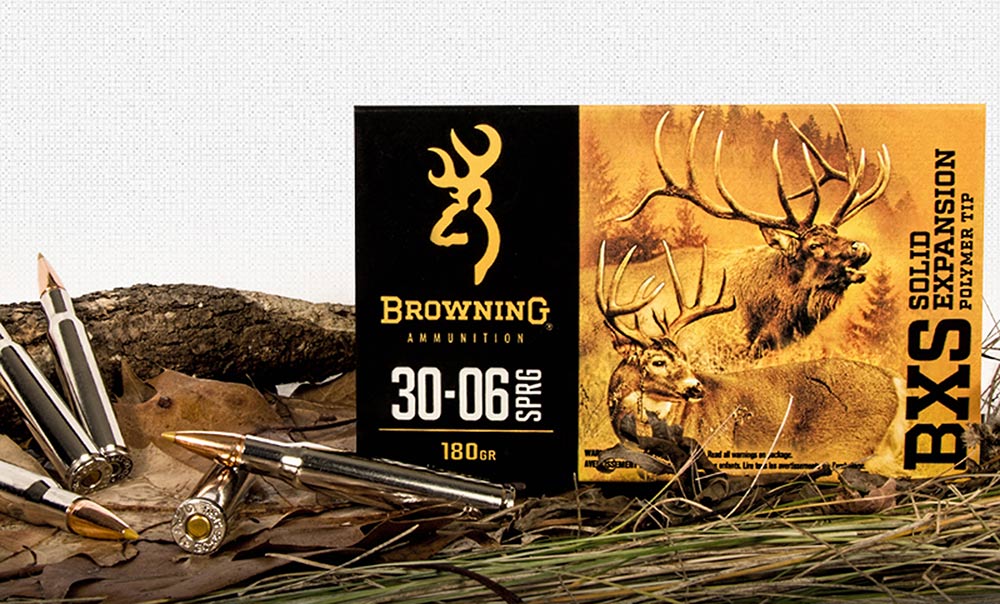 A new lead-free offering from Browning. 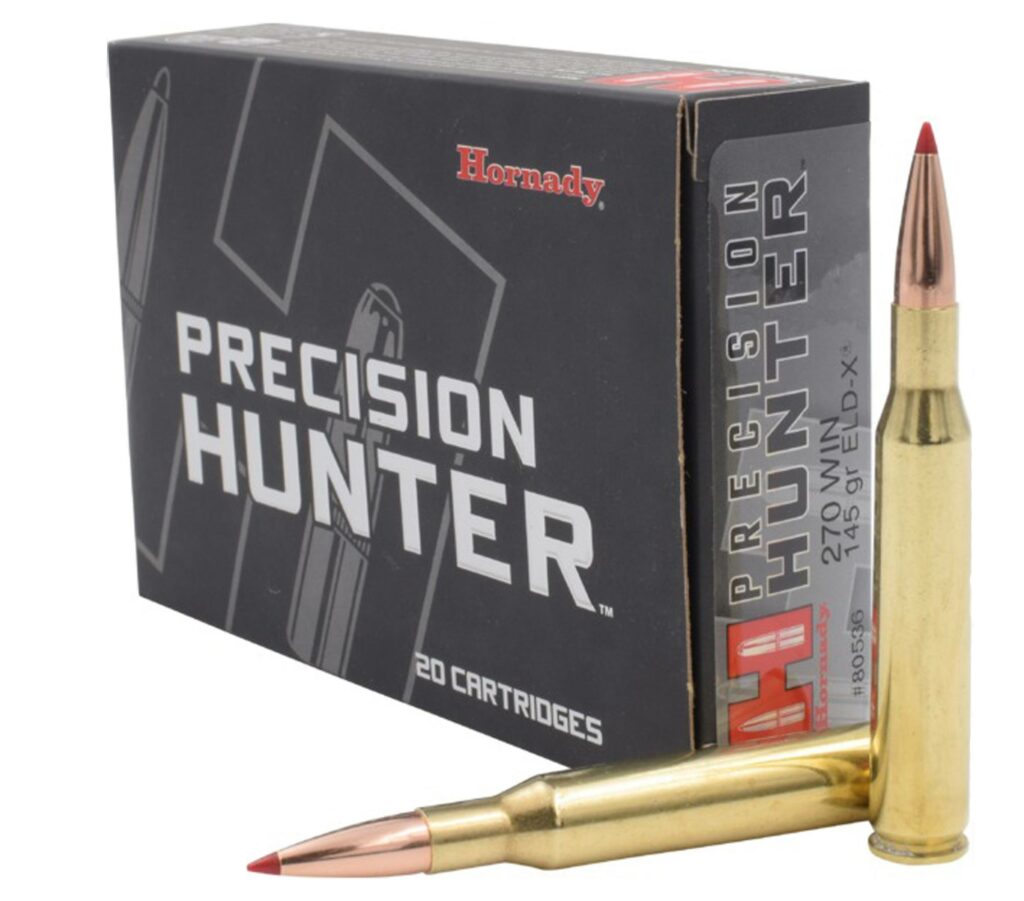 Another of my favorite ammo manufacturers is offering a 325-grain “Honey Badger” bullet stuffed into a .45-70 Gov’t. The solid copper, non-deforming, non-fragmenting projectile exits the barrel at around 1,900 fps, and when shot into ballistic gelatin creates a temporary wound cavity up to seven inches in diameter and almost three feet long. Seems the flutes in the forefront of the bullet have a hydraulic effect on soft tissue. The Honey Badger line is designed for home and self-defense, but with that kind of performance it would appear ideal for hunting anything up to and including the big bears. Black Hills 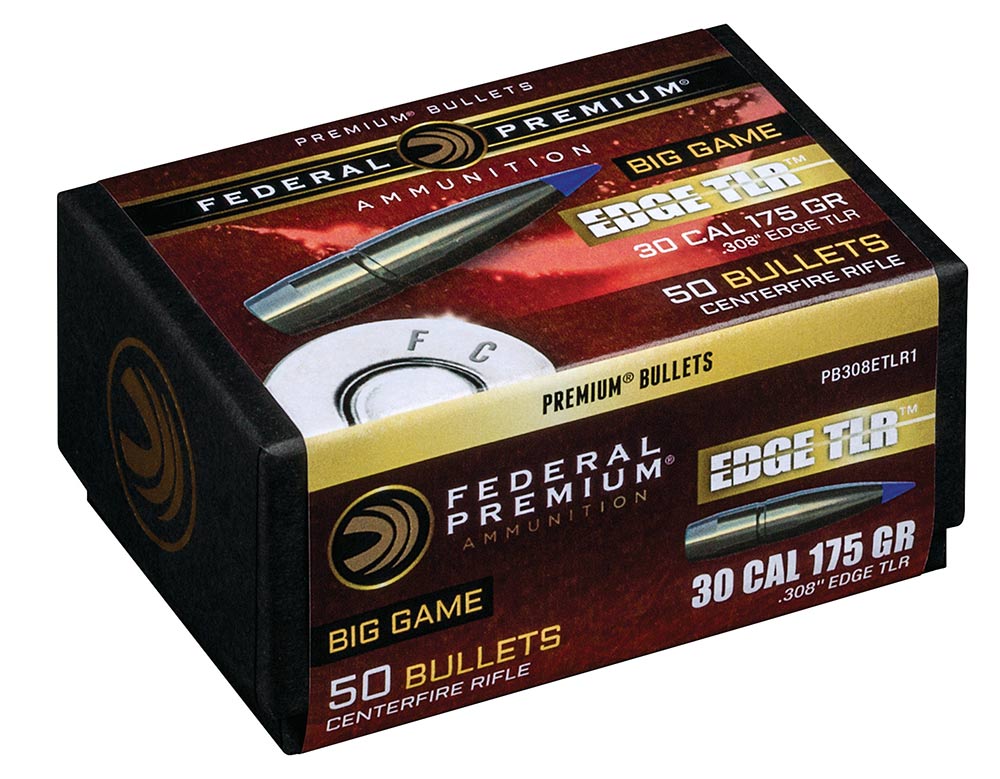 Last year one of the most exciting new-ammo announcements was Federal’s new “Terminal Long Range” hunting bullet. The design has since been busy proving itself in the field with impressive results. Now Federal is announcing that Edge TLR ammo will soon be available in 7mm Rem Mag (155 gr.), .270 Win (140 gr.), and .270 WSM (140 gr.). Another exciting development for handloaders is that the TLRs will be available in component form in 140-grain .277, 155-grain .284, and 175- and 200-grain .308. Federal Premium 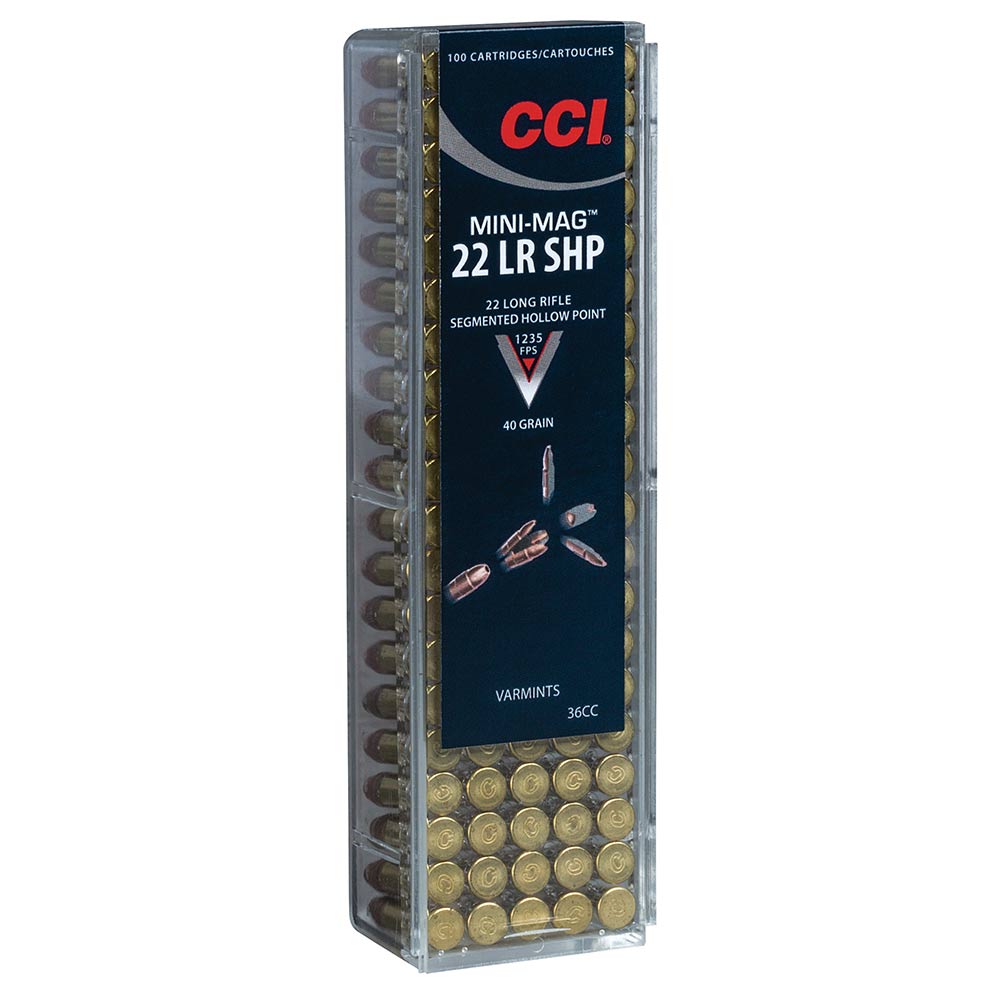 CCI has upped the bar again with its new 40-grain SHP.

A decades-long leading producer of rimfire ammo, CCI has upped the bar again with its new 40-grain SHP (segmented hollow point) ammo. The projectile is designed to split three ways upon impact, creating three different wound channels and bringing quick demise to marauding varmints and tasty small game. Touted to be super clean and reliable, this new rimfire ammo will be loads of fun to try out. CCI Ammunition 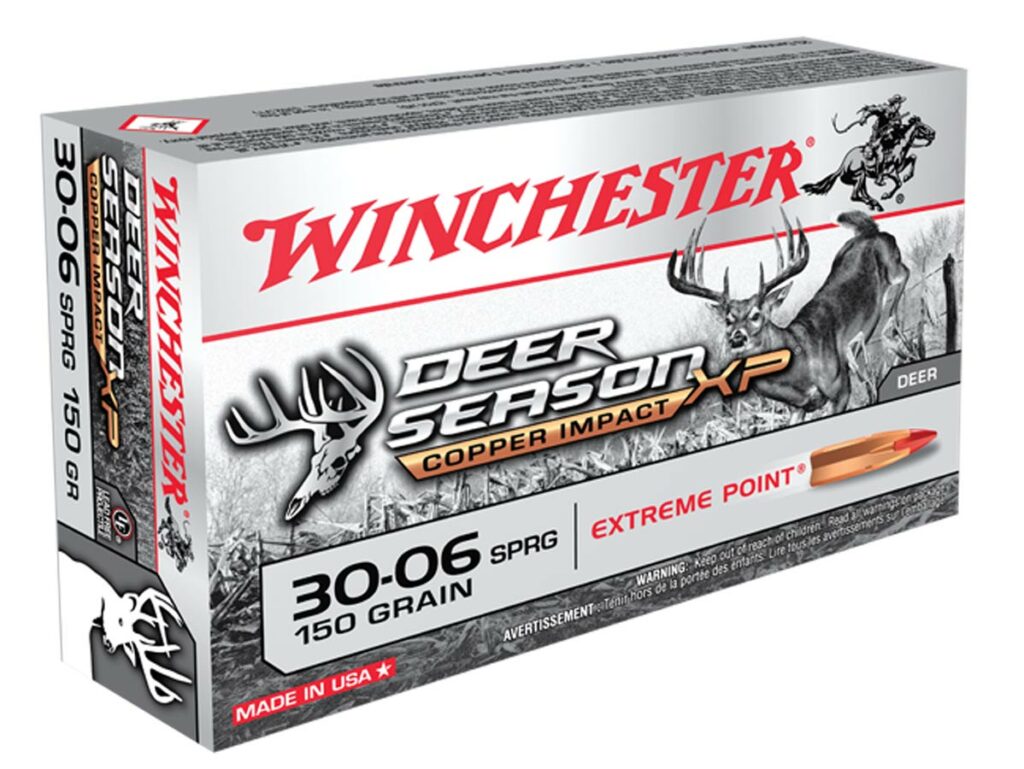 This ammo is designed to hit deer-sized game hard.

I would be remiss not to mention Nosler’s steadfast dedication to the .280 Ackley Improved. It’s a cartridge that has had a faithful following for decades, but is just recently coming into its own due to the modern trend of shooting into the next county. Known to produce some of the finest quality brass in the industry, until recently Nosler has been the only major manufacturer who produced .280 AI. Now they are adding a 140-grain Ballistic Tip to their array of .280 AI loads, designed to be devastating on deer, hogs, and such. Nosler 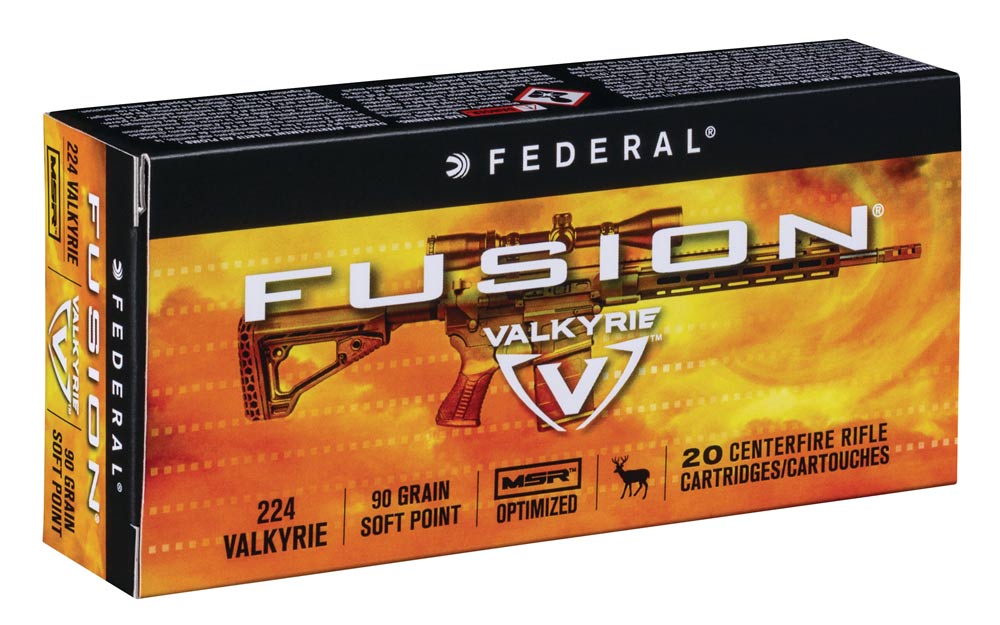 Federal designed the new 224 Valkyrie to be the most potent cartridge chamber-able in an MSR 15 platform.

I’ve saved the two most exciting announcements for last. You’ve probably already heard of them, if not you should pick up your pillow and pull your head out from under. Federal designed the new 224 Valkyrie to be the most potent cartridge chamber-able in an MSR 15 platform (a position contested by the 22 Nosler cartridge). It shoots a streamlined 90-grain projectile hard enough to keep it supersonic past 1,300 yards. An explosion of ammunition offerings have leaped forth from a myriad of manufacturers, including Federals own Fusion 90-grain hunting load. Federal Premium 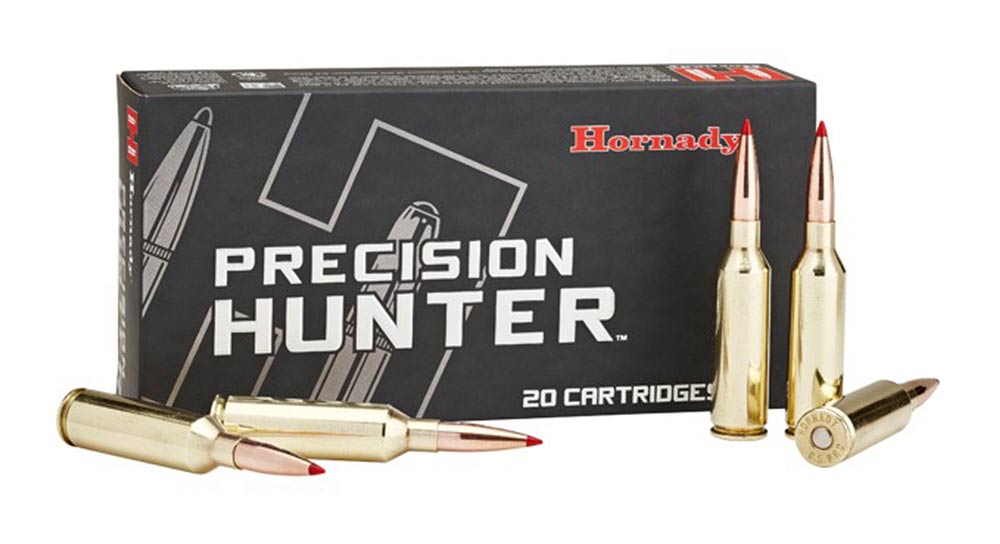 The big brother to the wildly popular 6.5 Creedmoor, Hornady’s new 6.5 PRC (Precision Rifle Cartridge) is quite possibly the finest mule deer and pronghorn cartridge ever designed. I have no personal experience with it yet, but numbers don’t lie, and this new cartridge shapes up. It won’t have the barrel life of the 6.5 CM, nor the mild attitude, but it will perform as fast and efficiently as sanity allows. Check out Hornady’s new Precision Hunter 6.5 PRC loaded with the 143-grain ELD-X. It travels at 2,960 fps, dropping only 18 inches at 400 yards. Hornady