We ranked and reviewed these eight new compound hunting bows

This is the new archer’s paradox: Bows are getting so good that selecting the best one is difficult. Well, maybe that’s just the bow tester’s paradox—but it’s true. This year’s crop of flagship compounds overall is excellent. They’re (mostly) fast, (mostly) quiet, and (mostly) free of vibration. All of them are capable of nock-busting groups, and the gap between the best and worst is smaller than it’s ever been. But after four days of intense testing, we learned that a gap remains all the same. —Tony Hansen 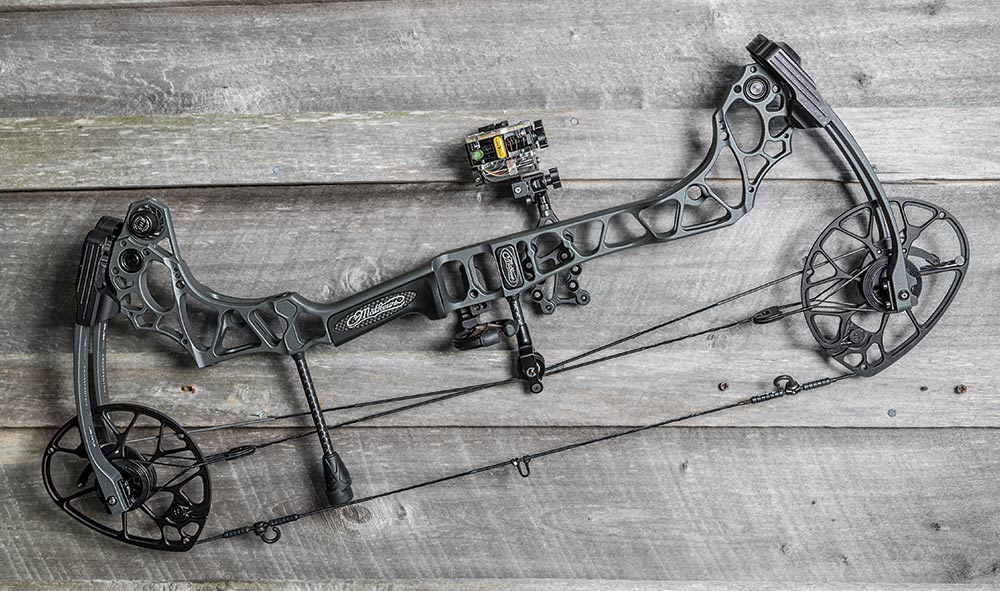 Remember when short-axle-to-axle bows were as hot as the ghost pepper challenge? Those days seem to have passed. In recent years, manufacturers have been building longer bows because many archers realized a short bow can’t deliver the same level of accuracy. Yet this year’s Editor’s Choice—the Mathews Triax—bucks the trend of 33-inch-plus compounds. Measuring just 28 inches axle to axle, the Triax is handy.

It’s also quieter than any compound bow we’ve ever tested, and almost totally free of vibration. The result?

“This bow is flat-out fun to shoot,” says tester and executive editor Alex Robinson. “It’s surprisingly easy to hold on target and super compact.” It’s also plenty fast at 330 fps. Fit and finish were near perfect, and the draw cycle was smooth, with a solid back wall. Though testers averaged slightly tighter groups with the PSE, the Triax was close behind it with a 2.4-inch average. Combine that performance with the bow’s excellent handling and over-the-top shooting experience (made possible by a new riser design that uses a single dampener placed well in front of the bow’s grip), and you get a compound that wowed the test panel and earned Mathews top honors.

For the objective components of this year’s compound test, we partnered with Stress Engineering Services, a consulting firm that tests everything from rifles to treestands at its Ohio-based outdoor division, for the second year. Read more about how we test here, and more about Stress here.

If speed is your thing, this is your bow. It’s also a great shooter and has a smooth draw. The Xpedite impressed us with its versatility and its performance on the range and in the test chamber.

Recording a sizzling 354 fps, it is 15 fps faster than the second-fastest bow in the test. That’s as big a difference as I’ve seen in several years of testing, and it’s downright impressive. Surprisingly, the Xpedite pairs that horsepower with a draw cycle that doesn’t leave your shoulder hurting. It was also the most accurate and forgiving bow of the test.

Yet, all that speed did come at a price: It produced more noise and vibration than any other model tested.

After Editor’s Choice honors for Bowtech in 2016 and 2017, the 2018 Realm didn’t quite measure up. Make no mistake­—it’s still a top-three finisher. But it landed in the middle of most of our test categories. On the Performance setting (a Comfort setting is also an option), the Realm was pretty fast, but its accuracy and draw cycle didn’t compare to the PSE’s or Mathews. Surprising to us, the fit and finish on our test model weren’t up to snuff either. The finish seemed blurry, and threaded areas on the riser had to be cleaned prior to our installing sights and rests. For the price, we expected more.

With a rock-solid back wall and outstanding fit and finish and a comfortable shooting experience, the Ritual is another good bow from Elite, and its top-four showing backs that up. At 325.7 fps, it was low on the speed list but finished in the top three in the accuracy and forgiveness category. The 90 percent let-off was a welcome feature for the treestand—or a hindrance to overall accuracy, depending on which tester you asked. Though the bow didn’t have much vibration, it was a little loud.

The Ritual is offered in 18 colors. 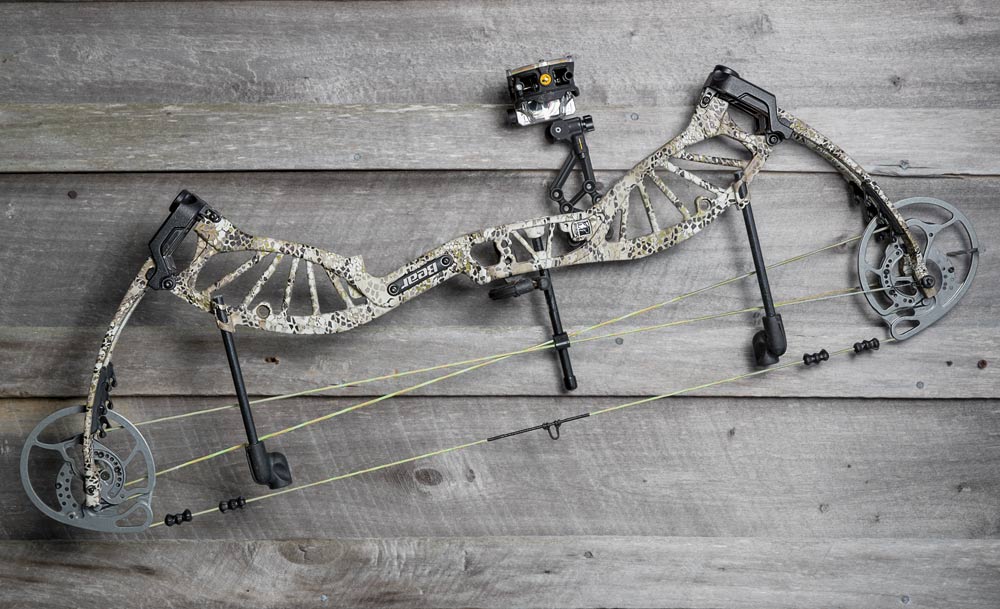 If you want to know how a bargain feels, grab a blindfold and shoot this bow. The Approach HC, despite costing less than half of most of the flagship models in the test, was one of the most accurate bows of the field (our testers averaged 2.7-inch groups with it). And with its hybrid cam system, it recorded arrow speeds of 333.7 fps, making it the fourth-fastest bow of the test. The bow was also well-balanced and handled nicely.

So where did it lose points? Noise and vibration scores, for one. With heavy loading on the front end of the cycle, drawing it was a bit harsh, though with adjustable limb stops on the cams, it had a solid back wall, and the valley wasn’t bad either. It’s not a bad-looking bow, but the fit and finish couldn’t measure up to the flagships’. The components, such as the cable guard and string stops, are simple.

Still, for $450, who cares? If you just want to hunt with a bow that will drive arrows through deer and hit where you aim, and you can overlook some cosmetic flaws and ­minor sacrifices in performance, you can’t do better than the Approach HC. It simply ran away with our Great Buy award.

Hoyt is still the leader in carbon-riser bows, and the REDWRX Carbon RX-1 is the latest example. The carbon system is a marvel of engineering and delivers a riser that is ultra-stiff and visually striking. It’s also been redesigned to lower the grip 1 inch while maintaining excellent balance. The bow features a redesigned Hyper ZT cam that claims ATA speeds of 340 fps, yet our bow managed only 318.3 fps. The RX-1 was not a tester favorite. It was in the upper third in terms of accuracy and forgiveness, but it earned only fair marks in speed and vibration—and its price tag was startling.

Obsession has produced Editor’s Choice contenders in years past, but the newest Fixation didn’t measure up to that previous success. The bow features a redesigned riser and a new limb pocket system, along with a very cool new anti-torque cable rod system. It zipped arrows along at a respectable 338.3 fps. Yet its accuracy and forgiveness ranking was middle of the pack, and the draw cycle was too harsh and clunky for the panel’s liking. Fit and finish were a point of contention, though the bow is offered in 15 different colors and three different cam finishes.

As with most G5-produced wares, the Logic is stoutly made and well-refined. At 31 inches, it is compact and handles nicely, and the innovative cam system is designed to eliminate lean. Its overall performance, however, couldn’t quite match up. At 317.3 fps, it was the slowest of the test field. It’s easy to overlook the disparity in speed if a bow delivers great accuracy—but unfortunately, the Logic proved to be one of the tougher bows for our test panel to shoot, with a draw cycle that was speed-bow harsh without the speed. It’s expensive too.

On the Range: Gear to Go

You can’t conduct a bow test without good arrows and targets. For the hunting-­spec bows, we used Victory Archery Products’ RIP TKO Elite arrows in 350 spine, cut to 28 inches and weighing 380 grains. These have been my hunting arrows of choice for several seasons. IBO-spec arrows were VAP VForce Elites cut to 30 inches and weighing 350 grains. Targets were 26-inch Signature/Competition Series Rinehart bags and 18-inch Rinehart X-Bow bags. —Will Brantley

We ranked and reviewed these 11 new hunting crossbows

The Best New Crossbows of 2018, Tested

For the objective tests, we partnered with Stress Engineering Services, a consulting firm that tests everything from rifles to treestands at its Ohio-based outdoor division, for the second year. Bows were set to IBO specs and verified by the staff of Broken Rack Archery in Batavia, Ohio. We then shot them through a Hooter Shooter inside a semi-anechoic (echo-free) chamber.

We calculated speed using a chronograph, a fletchless 350-grain arrow, and a capture-style rest. Draw cycle is an evaluation of a compound’s overall feel throughout the draw curve. (Stress also measured draw-force curves to confirm tester impressions.) Multiple microphones recorded noise, and Stress filtered the data to account for how we perceive sound. Stress ­measured ­vibration with a micro-accelerometer and applied a hand-arm perception filter.

Our test team—hunting editor Will ­Brantley, executive editor Alex ­Robinson, contributor Tony Hansen, and archery tech Danny Hinton—then gathered for field evaluations. Bows were set to 28 inches and 60 pounds and fitted with five-pin sights. Handling is an assessment of balance and ease of holding on target. For fit and finish, we judged the quality of components and aesthetics. The most important categories were double-weighted in the scoring process: speed, draw cycle, and accuracy and forgiveness, determined by averaging five groups from each shooter, with each bow, at 30 yards. Value is bang for your buck; the highest value score in each field determines the Great Buy. The best bow overall is Editor’s Choice. —Natalie Krebs