The early season provides a chance to sharpen their shooting eyes and give retrievers a refresher course before the regular duck season arrives. 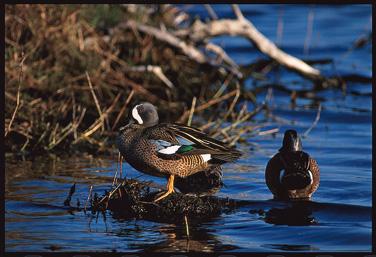 Imagine taking a bucket of stirred-up hornets and throwing them in front of a hunter. That’s what it’s like when a flight of blue-winged teal suddenly swarms in over a decoy set. The main difference is that a hunter is in no danger of being stung by teal–at least not directly. The sting of embarrassment he often feels when he sees empty shell hulls but no feathers floating on the water is bad enough.

A mental picture of darting and buzzing blue-wings came to me in the twilight of a new day. My son Hampton and I were huddled in our boat blind, waiting for our latest run-in with teal to begin. Our decoy spread arced around us. Night was giving way to morning. Soon Tennessee’s teal and wood duck season would begin, and hopefully we’d sample some of the sportiest shooting in waterfowling.

Suddenly Hampton whispered, “Dad, there’s a duck in our decoys!” I peeked through the willow limbs draped over our boat. Sure enough, the dark form of a small duck was swimming through our spread, turning its head back and forth as if confused by the decoys’ aloof stillness.

I was certain that it was a teal, but shooting time was several minutes away. Hampton and I watched as the duck paddled suspiciously beyond the decoys, looked back one last time and then flew away.

Our boat blind was anchored on a mud flat in massive Kentucky Lake. The water was only a foot deep, and the soft lake bottom was carpeted by thick aquatic grass–a favorite food of blue-wings. On opening day of the previous teal and wood duck season, Hampton and I hid on an adjacent island and mainly shot at passing woodies. But on that morning we’d seen big flights of teal working the nearby open water where no one was hunting. I remember thinking, “Next year I’m going to be out there.”

Now, “next year” had come. Would our new strategy work?

Blue-winged teal are the early birds of the fall waterfowl migration. Most of these ducks nest in the prairie region of the northern U.S. and Canada, but when the first cool fronts of autumn blow through, they head south. By the time regular duck seasons come in, most blue-wings have arrived on wintering grounds in Mexico and Central America. This is the reason for the early teal season. It gives hunters a chance before the ducks head offshore.

Early teal seasons were started in the mid-1960s. Today they are offered in “non-production states” in the Central, Mississippi and Atlantic flyways (not in the Pacific flyway). “Non-production states” are those in middle and southern latitudes where teal don’t nest in large numbers. Hunters should check their states’ regulations for early-season availability and dates.

The length of the early teal season (or whether or not a season is held at all) depends on the number of blue-wings in the continental population. If the annual waterfowl survey places the blue-wing population at or above 4.7 million breeding ducks, the early season runs 16 days. If the population is between 3.3 and 4.7 million, the season lasts 9 days. If the estimate dips below 3.3 million, the early hunt is discontinued until the population rebounds above this figure. (In 2002, the population count was 4.2 million, so the season ran 9 days.) Blue-wings, green-wings and cinnamon teal are legal targets, though blue-wings make up the vast majority of the bag. The daily limit is four teal in any combination. Hunters in Tennessee, Kentucky and Florida are privy to an early teal and wood duck season, which is five days long and offers a bag limit of four teal or wood ducks, not to include more than two of the latter.

Despite warm temperatures and bothersome insects, the early teal season has grown more popular as the years have passed. For many hunters, the early season provides a chance to sharpen their shooting eyes and give retrievers a refresher course before the regular duck season arrives. Teal are also among the tastiest of ducks.

Migrating blue-winged teal stop over on marshes, reservoirs, river sloughs and other waters, especially those with moss or aquatic grass growing near the surface. Some of the stopover areas are large and well-known for attracting teal: Kansas’s Cheyenne Bottoms, Iowa’s Riverton Bottoms, Tennessee’s Reelfoot Lake and Louisiana’s and Texas’s coastal marsh. Other blue-wing haunts are small and obscure, but offer superlative shooting to hunters who find them. They include such varied bodies of water as farm ponds, beaver ponds, oxbows and strip-mine lakes.

An understanding of the ducks’ migratory habits can help a hunter formulate a successful hunting strategy. In September, any north wind can bring a new flight. A body of water can be devoid of teal one afternoon, then covered up the next morning on the heels of a new front. Hunters should be diligent and pay attention to local weather forecasts.

Waterfowlers also should scout their hunting areas just before and during the season to locate teal. If ducks are present and there’s abundant food, they will usually hang around until the next cold front pushes them farther south.

Hunting teal is not difficult. The birds are typically uneducated as to the purposes of decoys and the hunters who set them out. A realistic spread and a good blind are important, but blue-winged teal are far less wary than bigger ducks that have been subjected to heavy pressure.

On small waters, hunters can usually make do with a small decoy spread and a temporary blind. Over the years I’ve enjoyed many teal shoots while hiding on a farm pond bank. I’ve used a hatchet to gather camouflage, sat on a 5-gallon plastic bucket and worn full camo to blend into the bushes.

Hunting on big water takes more effort. Again, scouting is critical. There’s no substitute for being in an area where teal congregate to feed. There you should put out a larger, more visible spread to attract birds over longer distances, and you must construct a blind that will conceal you totally in wide-open spaces.

Blue-wings aren’t particularly vocal. Hens make a weak, high-pitched quack and males make a peeping sound. Some hunters mimic teal calls to attract birds, while others use standard mallard calls. The truth is, the location of the hunting site and decoy visibility are much more important than calling.

The afternoon before our Kentucky Lake hunt, my son and I scouted the mud flat where we intended to hunt. When we motored near it, several blue-wings flushed away. Our plan was to set out decoys just before dusk, then return to hunt in the morning. The wind blew from the south and the weather forecast had indicated it would blow in the same general direction the next day.

We’d brought six dozen mallard decoys, and we divided them into three groups of two dozen each. We tossed out one group directly downwind of the boat, which was anchored where we planned to hunt. Then we left a 5-yard gap on both sides of this cluster and set the remaining decoys off the left and right ends of the boat [see diagram for open water, previous page]. The result was a half-moon pattern with two open holes in the spread and the boat nestled inside the crescent.

I reasoned that incoming teal would aim for one of the two gaps between the decoy clusters. The following morning, I would align the boat to one gap or the other, depending on the prevailing wind direction.

I added two other features to make the decoy spread more noticeable. I set six Canada goose floaters just outside the duck spread. Several live Canadas were working the flat, so the decoys were natural-looking and would be more visible to blue-wings passing at long distance. I also set up a wing-spinner decoy at the downwind edge of the center group of duck decoys.

After deploying our spread, Hampton and I motored to the closest island, cut a boatload of willow branches and brought them back and piled them on the mud flat near the decoys. In the morning we’d augment the camouflage of our portable boat blind with natural concealment.

The next day, we returned to our spot well before dawn. The wind had shifted only slightly. We positioned the boat inside the crescent of decoys, squared it up to one of the openings in the spread and anchored it at both ends. Next, we erected our portable blind and piled the willow branches across it for a more natural look. Then we sat in the dark boat and waited for legal shooting time. When it arrived, we realized that the teal that had landed in our decoys earlier was an omen of good things to come.

More blue-wings showed up as if on cue. They would wing up the lake in singles and doubles, see our decoys and veer toward them. They showed no fear of our blind and shots were close and easy. Hampton and I took turns shooting. My Lab Andy handled retrieving duties. We bagged a combined limit of eight blue-wings in 45 minutes. Then we unloaded our shotguns and sat and watched as several more ducks landed in our spread.

The hunt couldn’t have gone better. The teal were plentiful and we had no competition from other hunters.

The same sort of approach will work elsewhere for hunters who apply it to their home waters. Early teal season offers great shooting, albeit for just a few days. Blend in big water and a portable blind and a decoy spread, and you’ve got a recipe for as much fun as you can handle.

Wade Bourne is the author of Ducks Unlimited Guide to Decoys and Proven Methods for Using Them. To obtain copies, visit his Web site: www.wadebourne.com.

Since lead shot was outlawed for waterfowl hunting a couple of decades ago, ammo manufacturers have come up with a plethora of hard-hitting substitutes that combine various metals and meet the criteria of the U.S. Fish and Wildlife Service’s non-toxicity standards.

But what’s wrong with the original non-toxic lead substitute–steel? Actually, nothing. This was proved to my satisfaction in December when I participated in a flooded-timber duck hunt at Wingmede, the famed Arkansas waterfowling club near Stuttgart. Most of the shooters were using Federal Classic or Federal Premium steel loads and there were no complaints about the effects of the loads on the mallards, which generally had their landing gear down and were no more than 30 yards away when the guide yelled “Now!”

Granted, steel shot loads don’t have the same slam at long range as do the hybrid metal blends that have hit the market in recent years. Compare the cost of a box of 25 steel-shot loads to a 10-load box of other nontoxics, however, and you’ll discover another reason why steel shot remains a staple of the waterfowling market–they’re cheap, anywhere from a third to half of the cost of other loads.

Federal has replaced Classic and Premium steel brands with Federal Speed-Shok and Premium Ultra-Shok, respectively, and the packaging is distinctly different. Other than being slightly more expensive than Speed-Shok, Premium Ultra-Shok is available in a wider range of shot size, and its payloads are about 25-50 feet per second faster than comparable Speed-Shok loads. Contact: Federal Ammunition, 800-322-2342; www.federalcartridge.com –Colin Moore