To land a big tuna on a popper, you've got to practice stress control 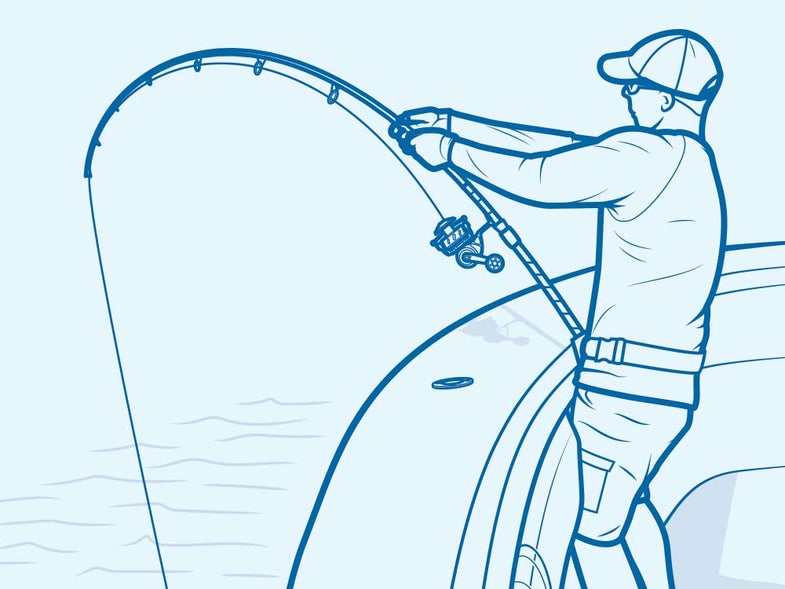 When big tuna are in town, most captains break out big 50-wide conventional reels on broomstick rods and start trolling. Not me. I’m one of the dedicated tuna captains in the Northeast who lives for the adrenaline blast of casting surface lures to these speed-demon masses of pure muscle. If you are a true topwater addict, you haven’t lived until you’ve seen a 150-pound bluefin detonate on a ­popper and rip 150 yards of line off a spinning reel in under 20 seconds. Truth be told, this style of fishing is not for the faint of heart. Your mind, body, and gear had better be up to the task. Here are the five most-stressed points during a spinning-gear tuna fight and how to counteract them to achieve topwater tuna glory.

The second a fish crashes your plug, you’ve got to maintain composure. Fish are often lost before they’re ever on because anglers get stuck in the moment after witnessing that powerful eat. If you don’t set the hook hard three or four times to drive those points in as soon as that fish turns, it’ll be gone. During that first run, don’t get mesmerized by the line ­melting off the reel, ­because it’s a guarantee the fish will turn and come at you.

While the early part of the fight isn’t usually too taxing, for an hour or more after the fish finishes its runs closer to the surface, it will dive and engage in a vertical tug of war that can punish your back. As with lifting anything heavy, proper form is key. Bend your knees and use your legs as much as possible to reduce back strain.

The significant amount of pressure exerted when you’re trying to gain on a fish by pulling up and reeling down can turn your arms into jelly. If one of your angling goals is to land a huge tuna on spinning gear, it’s not a bad idea to strengthen the biceps. Doing curls works the same muscles you’ll need for pulling on a tuna. It’s also not unusual for the forearms to give out when anglers grip the rod as hard as they can for 30 minutes to an hour or more. Truth is, doing that isn’t necessary. All you have to do is hold the rod tight enough so that it doesn’t slip out of your hands.

Read Next: How to Catch Bluefin Tuna

If you want to land a tuna in a reasonable amount of time, you’ve got to put the screws to it. Most dedicated tuna-plugging rods have tips that are relatively soft to aid with distance but have a powerful mid-to-butt section that lets you put heat on the fish. Spinning reels used in the tuna game should be able to apply up to 60 pounds of drag pressure gradually and consistently. Reels need to have top-quality internal components, because if any flexing or bending happens under the strain, catastrophic misalignment occurs. I’ve seen subpar reels literally blow up.

5. The Terminal Tackle and Lure

You simply can’t get by with anything less than 80-pound ­hollow-​core braid if you plan on hooking into fish weighing more than 100 pounds. One of the benefits of this line is that its strand count is higher than solid braid’s, so it’s more durable. To create a seamless, super-strong leader connection, I use 100-pound fluorocarbon wind-on leaders with a loop-to-loop connection, adding a heavy-duty swivel and split ring to the end of the leader. Tuna lures absolutely have to be through-wired, feature 200-pound-class split rings, and be equipped with 4X- or 5X-strong treble or J hooks.