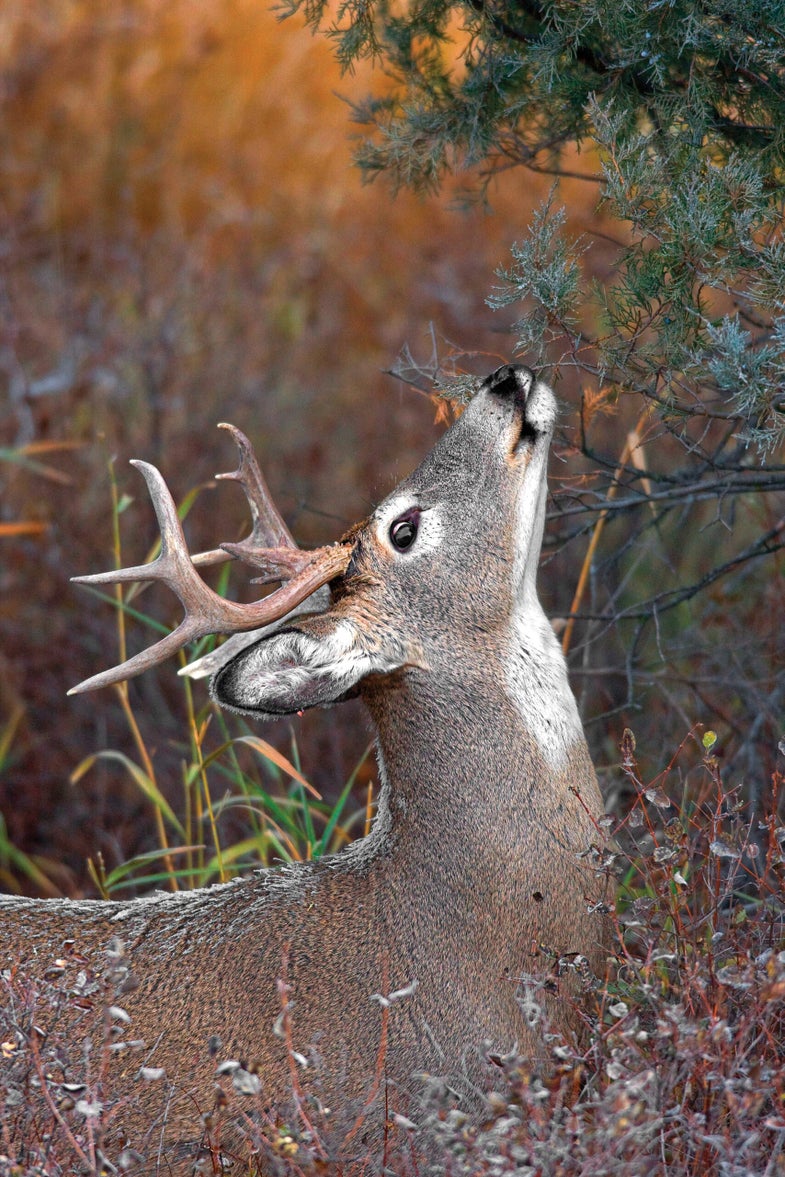 It was a hunting strategy born of utter desperation. Deer season had grown old, and with just a week remaining to hunt, I didn’t have much left in my well-worn bag of tricks. There was only one stop left to pull out, and I found it while rummaging through an assortment of cardboard boxes in my garage. Eureka!

Tinks, HS, Code Blue, Wildlife Research, Conquest, Top Secret, Wildgame Innovations—I’d use every damn drop of deer scent I had. To heck with dabbing a few dribbles on a cotton ball and hanging it in a tree. My scheme was to completely saturate my hunting area with a variety of scent bombs and drippers. I’d either attract every buck in the county or else run them off into the next.

The plan worked to perfection—almost. SD cards from game cameras that had gone dark from inactivity suddenly lit up. I had dozens of photos to sort through each day. Although virtually all of the trail cam images were taken at night, there were bucks in all of them, including one that I estimated to be in the high-140-inch class. It was late December, yet I had photos of bucks squaring off, chasing each other off, sniffing and licking scent drippers, and otherwise displaying late-rut behavior. It was both fascinating and rejuvenating. I felt certain that if only a sharp cold front or snowstorm would come through, I’d get an opportunity at a good buck during daylight hours. It was, however, not to be. I simply couldn’t shake up their nocturnal routine. The season closed with a whimper—and that 140 sniffing at a scent bomb in the moonlit dusk after legal shooting hours.

I continued with my mad experiment even after putting up my gun. In an effort to increase the bucks’ daytime movement, I pulled all 10 scent bombs each evening and redeployed them each morning. It didn’t work. I tried freshening the scent dispensers at various times of the day as well, but nothing managed to alter their predictability—until, that is, an overdue snowstorm hit in mid-January. For two days in a row, my trail cams snapped awesome images of bucks—none of which still had antlers on their head. Anecdotal as it may be, here are a few real-world lessons that I learned about using deer scents—all of which will be exploited this season.

If you want deer to check out your scent bomb, locate it near a travel corridor. A buck may come trotting in on a string from a mile away to check out a scent dispenser, but it’s more likely—certainly during the post-rut period—that he’ll be sucked toward it while he’s on a regular route. Location seemed more relevant to visitation than brand (e.g., Tink’s vs. HS) or type (doe urine vs. doe-in-heat urine).

All deer are curious critters. My observations indicate that bucks are apt to check new sources of scent over established ones. Each time I added a location to my routinely refreshed scent posts, the new scent source was visited first.

And deer check it for as long as six months. A hanging bag of Wildgame Innovations Wild Estrus Squirt was targeted by several deer—all young bucks—through summer, even though the liquid had long since been deployed.

Perhaps not a great surprise, but whether through simple evaporation or strength level, some scent posts proved more potent than others. The Buck Bomb Detonator, for example, seemed to be checked out by deer far more than an equally refreshed cotton ball. To me, the riddle of deer scents remains just that. My simple observations haven’t solved it for me. But continued research will sure be fun.