Want Your Dog to Hunt Better? Give Him a Real Bed 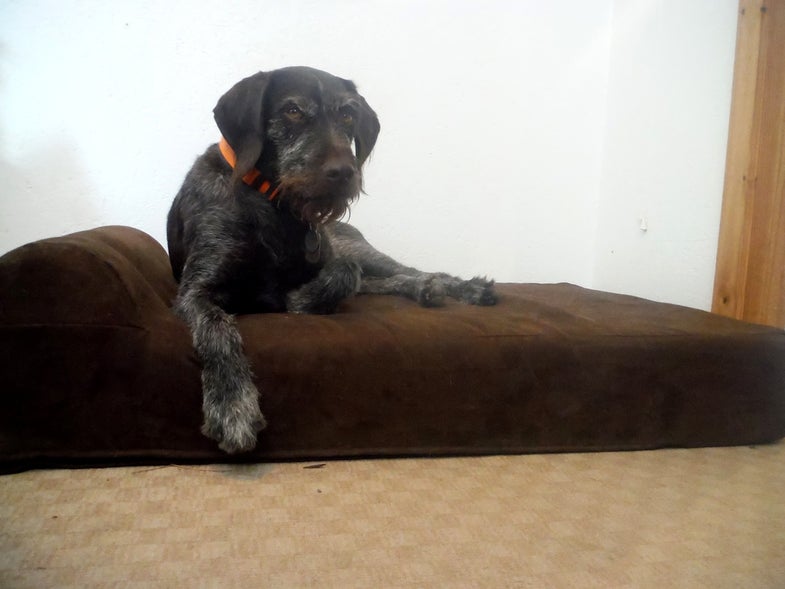 The Big Barker bed is a smart option for weary and ailing dogs. Scott Linden
SHARE

If you’re reading this, you likely have a hunting dog. Which means sooner or later you will both face creaky joints, aching muscles, or worse. Today, let’s confine our discussion to our dogs’ needs: arthritis, dysplasia, and other orthopedic issues can debilitate your hunting partner, sometimes at a tender age, and almost certainly as they mature. The only question is what you can do about them.

Carefully managed, a hunting dog’s career can be prolonged and his quality of life improved, often for years. Unless you just crawled out from under a rock, you probably know plenty about non-steroidal pain relievers, pharmaceuticals, dietary supplements, physical therapy—even surgical solutions. Each has their place at some point in a dog’s life and most merit discussion between you and your veterinarian.

If you’re thinking, “it ain’t so in MY kennel,” odds are you’re wrong. Just as you ache after a pickup basketball game, our dogs feel the effects of a hunt whether they show it or not. Inflammation, bone-on-bone wear, and muscle, tendon and ligament damage are a natural outcome of exercise.

According to veterinarian Sarah Wooten, most dogs won’t exhibit outward signs of pain. Instead they might be “slow to get up, can’t go as long, take short strides, and are grumpy.”

Wooten says dogs with joint pain also sleep more than usual, but seldom will they cry out in pain from the discomfort. In the wild, a dog verbalizing pain will get killed, so evolution has created an animal that sucks it up.

That’s why it’s our job to help minimize the damage and and speed the healing.

More than an ounce of prevention first: carefully meting out physical activity for pups (no jumping!), and dietary supplements for gray-muzzled veterans, are simple proactive strategies. Buying a pup whose parents have sound hips and elbows is another.

A balanced diet for each life stage helps bones and joints develop at the right pace. Keeping your hunting partner on the lean side is just as critical. Wooten says a well-conditioned dog could live up to two years more than an overweight littermate.

We can also help them sleep better.

Big dogs face a structural imbalance not only in their bodies, but in most bedding. The big-box-store beds, our home-made solutions, piles of straw, crib mattresses, and even many high-end dog beds won’t support a 60-pound dog well enough to keep aching joints from contacting hard floors or ground. That in turn exposes joints to stress from below and above. The geometry of unsupported limbs stretches tendons and ligaments, compounding the grinding and grating of bone on bone, or bone on hard (often cold) surfaces.

Wooten says up to 80 percent of dogs suffer from the orthopedic effects of inadequate bedding. Put another way, most hunting dogs, most times, are probably not functioning at their peak due to joint problems. Slept on a bad bed (or the floor) on a hunting trip? You can relate. I know I can. It’s why I love my foam bed.

Enter Eric Shannon. He was motivated to seek relief for his 92-pound mutt, Hank, when the dog was diagnosed with hip dysplasia. His choice was simple: surgery or minimize the stress on Hank’s hips.

Shannon, who sold premium dog beds online, didn’t have one in his inventory beefy enough to take stress off Hank’s damaged hips. And he wasn’t alone: “Our customers would buy a new bed every six months,” he said, “they kept flattening.” His tests—and my own—confirm that.

Considering that most dogs sleep an average of 12-14 hours a day, that’s a lot of joint-bone-floor contact.

Eventually, Shannon found a foam scientist (yes, that’s a job) and together they spent years testing designs (even using instruments NASA employed to map pressure points and materials’ resilience). They ultimately settled on a three-layer sandwich (a softer top and bottom, more rigid center) and Big Barker was born.

Shannon won’t call his material “memory foam,” which he cautions is a nebulous term even in the human bed market. Using domestically-manufactured memory foam would also be cost prohibitive. And it’s not the right material anyway. The closed-cell technology of memory foam restricts air circulation and causes most dogs—and humans—to get too warm. His foams are American polyurethane. “We call it therapeutic foam,” he said.

A quick Google search of “orthopedic dog beds” yields a variety of foams, covers, sizes and thicknesses. Most are imported, a few are made in the U.S. Shannon’s seven-inch thick pad is the big dog in this market. Besides allowing for the multi-layer design, he suggests a thicker bed makes getting up and lying down easier for older dogs (think about which you’d rather climb out of—a futon or a raised bed).

My 65-pound wirehair Manny runs hard every day, and like the television commercials for human beds, wakes up refreshed and rarin’ to go. He also sleeps more soundly on his Big Barker crate pad, waking and turning less in the night.

They range in price from $200 to $350 (sizes large, extra-large, and giant) and come in a few different colors.

I’m not suggesting everyone run out and purchase a Big Barker. Pile up enough straw, cheap beds, crib mattresses or other foams, and you can probably accomplish a similar outcome. At home, maybe you can convince your spouse to let Gunner share your foam bed.

Or, on second thought, considering a Big Barker might be a better solution.