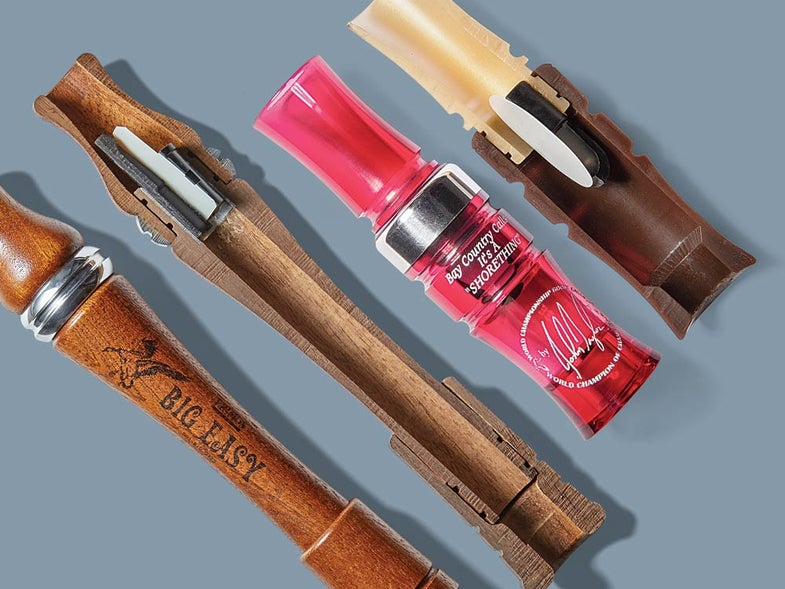 Running a goose call without understanding its inner workings is akin to playing an instrument without knowing whether you’re blowing into a trumpet or a saxophone. So we had John Taylor, call craftsman and goose-calling champion, and Anthony Foster, product engineer at Primos Hunting, cut their calls in half, explain the operations inside, and describe how to play each one.

How they work: “There are three main components to any goose call,” says Taylor. “The barrel, the insert, and the gut assembly.” The insert holds the gut assembly, which includes the tone board, a mylar reed, and the wedge. “Like a car’s engine,” he says, “a call’s gut assembly is what makes it go.”

Air pushing the mylar reed against the tone board makes goose sounds. The natural bend of the reed is positioned upward to reduce stick. You must cup your hands over the call to create back pressure and vibrate the reed, which distorts the sound and creates a realistic hooonkkk.

Tuning is critical. “The length of the barrel, the length and taper of the reed, how the gut assembly is tuned —it all affects the sound,” says Taylor. A wedge closer to the front of the call allows less air to work against the reed, creating higher-pitched sounds. A wedge farther back allows more air to pass over the reed and makes for lower-pitched sounds. “The best calls are tuned in the middle, to offer both high and low notes.”

Long-reeds are easier to blow, and it takes less air to break into the two-tone sound of a goose. Shorter calls take more air and are harder to blow, but are louder and higher-toned.

When to run ’em: The short-reed’s high pitch is ideal for early seasons, when flocks expect to hear young, excitable birds on the ground.

Long-reed calls shine later in the year, when flocks are led by mature birds, and natural goose sounds are lower and more guttural.

How they work: A flute call, also called a resonant-chamber call, has an extra chamber at the far end, so applying back pressure with your hands (like you would with a short-reed call) is less important.

“Calls like Primos’ Honky Tonk, Canada Goose Flute, and Big Easy give you that constriction to help make the breaks, which make realistic sounds without your having to use cupped hands to do it,” says Foster. Flute calls also typically don’t need tuning.

When to run ’em: This is the everyman’s (and woman’s) call. Flutes are relatively easy to blow and foolproof. This is the call you want if you’re mainly a duck hunter but want to give passing geese a try. Sometimes the hollow honks of a flute will get the job done when nothing else will, which is why even veteran callers carry a flute.

The simplicity of blowing a flute also makes it ideal for frigid-weather hunting because the call itself takes care of back pressure, versus having to muffle the sounds with gloved hands.

1. Blow from the diaphragm: “Don’t blow from your chest,” says Taylor. “Blow like you would to steam a mirror.”

2. Use voice inflection: “Talk—don’t grunt or growl,” says Taylor. “Work that call like you would a kazoo. I use dut for low clucks, dat for high ones. Start slow, then speed up: Dut. Dut. Dut. Dat dut. Dut dat dat dut datdutdatdut.”

3. Work your hands: “Even with a flute call, you can cup your hand over the end of the barrel. Open and close it to help produce multiple tones and breaks,” says Foster.