It goes like this: "Use a big enough gun and you can knock down your game, in its tracks, every time." 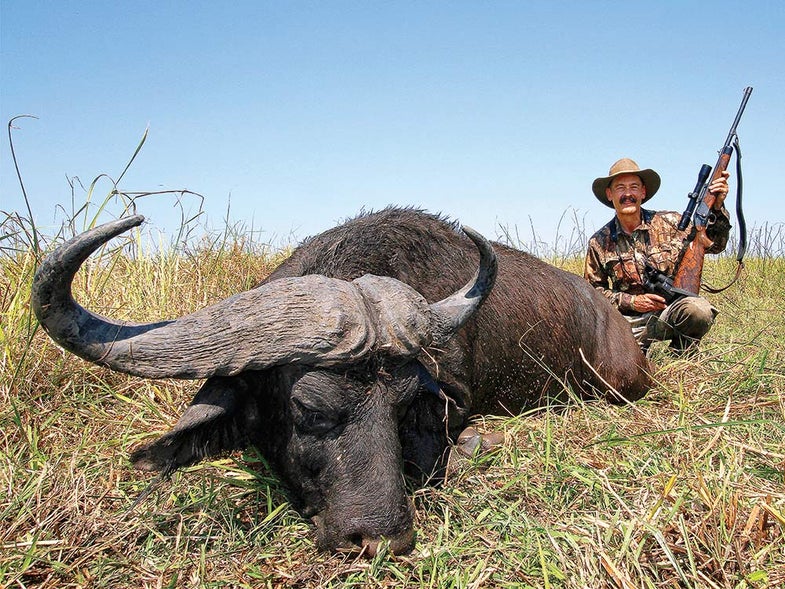 Belief in the knockdown power fairy tale has led to missed game, lost game, disappointed hunters, and increased gun sales for generations. Here’s how it happens: Billy Bob shoots at a big buck. It runs off, and another hunter finds it and claims it. Or the blood trail dries up and B.B. never recovers it. So B.B. buys a bigger gun, but eventually another deer gets away. The .30/30 becomes a .30/06 becomes a .300 Magnum becomes a .338 Magnum becomes a .375. B.B. develops a flinch but never quite finds his knockout punch.

Now wait a minute. What about that deer you once dropped like a bowling ball? And the elk Uncle Reggie knocked dead in its hoofprints, and the elephant you saw poleaxed on that TV safari show? Say hello to the brain shot, or, more broadly, the central nervous system hit. Park a bullet—even a .22 rimfire—in the brain or spinal column, and even the biggest animal will go down. Bullet mass, velocity, and kinetic energy don’t hammer game like a meteor from heaven. They kill by breaking down vital organs that supply blood to the brain. This can take from several seconds to several minutes, during which time game can, and often does, run.

Bullet energy really matters only when it’s insufficient to penetrate enough to reach those vital organs. As many a bowhunter will testify, that energy level doesn’t need to be high. Plenty of deer, elk, and even moose have been poached with .22 long rifles.

Many hunters think that bullet energy will flatten game if the bullet stays inside the animal and dumps all of its energy there. Sorry—that doesn’t always work either, as I’ve learned firsthand many times. Two years ago, I put such a bullet quartering from behind into a running whitetail’s chest at 30 yards. It kept running. I put another shot in at 50 yards. The buck ran over a hill. I followed, spotted the animal lying in short grass, and punched one more round through its chest. A few seconds later, it expired. None of these bullets knocked the deer over. None exited. All were 150-grain bullets launched from a .300 Win. Mag. at 3,100 fps.

For perspective, each of those bullets carried roughly 3,000 ft.-lb. of kinetic energy. That is enough energy to lift a 3,000-pound object a foot off the ground or a 200-pound deer 15 feet off the ground.

Does this mean a .300 Winchester Magnum is too puny for whitetails? Consider a 300-grain slug from a .375 H&H Magnum. My wife used one to shoot an African common reedbuck about the size of a Carolina whitetail doe. That buck took the hit and dashed forward a good 80 yards before wobbling and falling over.

At the other extreme, I once airmailed a 60-grain bullet via a .22/250 Rem. to a whitetail buck 100 yards away. It passed through the deer and expended its remaining energy in the dirt. That buck dropped as if unplugged.

So what’s going on? Why does game sometimes fall as if poleaxed, other times run as if untouched? Why no consistency? Is it adrenaline? Bullet type? Bullet placement? Time of day? Moon phase?

The truth is, there is no sure-fire guarantee, no silver bullet, no magic cartridge that can anchor a deer or even a coyote every time. Hit the central nervous system and bullet energy hardly matters. Down it goes. Punch through the lungs, heart, or liver, and sometimes an animal collapses instantly. But more often it stands, walks, or runs for as many as 10 seconds before falling blood pressure makes it faint. This is what you see when a heart-shot buck runs, starts wobbling, falls, tries to rise, falls again, and expires. It’s classic oxygen deprivation. Sometimes heart-lung hit animals die instantly from so-called hydrostatic shock. Evidence suggests this is most likely from the bullet’s impact causing blood vessels to rupture in the animal’s brain.

What the best hunters can do, in addition to parking their bullets in the right place, is use bullets that maximize vital tissue destruction. Sometimes these are frangible projectiles that break up inside, spread out, and cause massive hemorrhaging. Sometimes these are lead bullets that expand from 1.5 to 2 times their original diameter and lodge against the hide on the far side. Sometimes they are monolithic bullets with petals that open wide to tear tissue and exit the off side, leaving a hole for blood trailing.

Best advice: Shoot any cartridge you can handle without flinching and any bullet you have confidence in. Strive for precision shot placement. Always assume you made a hit regardless of how the game reacts. Track and trail judiciously. Expect hit game to run, and breathe a sigh of relief if it drops right there. And forget all about knockdown power.