Why a Revolver is Still a Smart Choice for Personal Defense 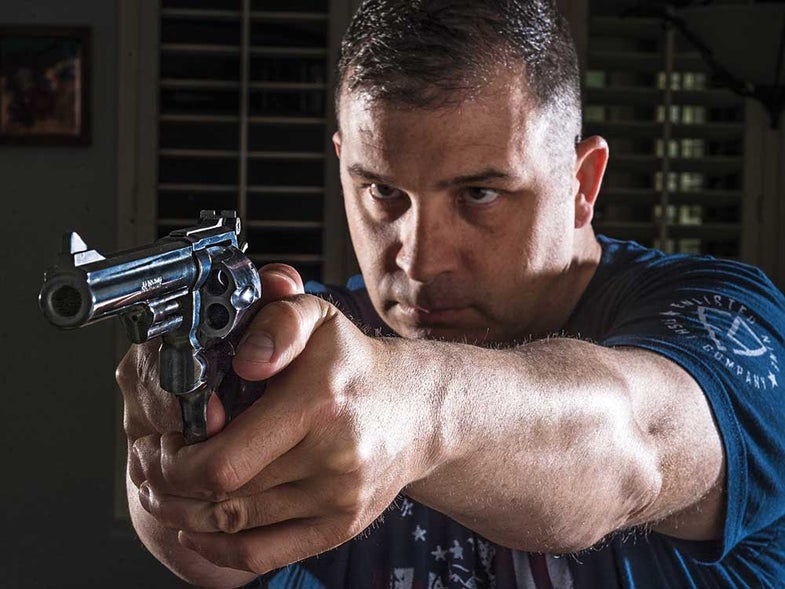 In today’s world of high-capacity, polymer-frame, semi-auto pistols, we often forget about the original repeating handgun. While the roots of the revolver go back to the revolving arquebus, produced by Hans Stopler of Nuremberg in 1597, it wasn’t until 1836 that Sam Colt figured out how to make it work reliably. Once Colt started making revolvers, the world of repeating handguns changed forever.

Whether you’re in the field hunting, hiking, or exploring, or in any wilderness setting, the revolver is the top choice in a handgun. For personal defense, the double-action revolver may be a bit less popular nowadays, but it’s every bit as good a choice as it ever was.

RELIABILITY AND VERSATILITY
One big upside of a revolver is that it is almost totally reliable. A quality revolver that is maintained and fed a proper diet simply does not jam. In the event of a misfire, another pull of the trigger lines up a fresh cartridge with the barrel.

Revolvers can be chambered for much more powerful cartridges than semi-auto handguns, which makes them the clear choice in a wilderness setting, where the predators are on four legs and can be big, tough, and tenacious.

From deep-cover concealed-carry to defense against the world’s largest predators, the wheelgun still shines bright. It is our oldest successful repeating handgun design, and continues to be a great choice for personal protection.

The S&W J-Frame
Even though it has fallen out of favor with internet “experts” these days, the S&W J-Frame revolver is still an outstanding choice for carry in almost any situation. I carry an alloy frame S&W M&P Model 340 .357 Magnum in my pocket just about every day. It’s so light, I hardly know it’s there.

When hunting, I carry a similar Model S&W 360 on my belt. This is the same lightweight, scandium-frame gun, but with an external hammer.

The S&W Model 629
The .44 Magnum has been my favorite revolver cartridge for years. I started with an S&W Model 29, 6 ½-inch barrel—the same gun Dirty Harry used—and I have owned just about every other .44 Magnum on the market over the years.

My latest favorite is a custom Model 629 revolver that Mag-na-port worked on for me. It has a 2.5-inch barrel and a K-Frame round butt grip. I find that this lightweight .44 is very handy to carry for both urban and wilderness settings.

Ruger LCR
The Ruger LCR is a very popular, reasonably priced double-action revolver. This gun makes use of polymer in the frame, which keeps both weight and cost down, yet it can handle a powerful cartridge like the .357 Magnum. It’s offered in a wide range of cartridges, from .22LR to the .357 Magnum. Mine, of course, is in the latter, and it’s held up well to a lot of shooting. It’s a small handgun that is easy to carry, chambered for a very powerful cartridge, and priced so a working man can easily afford it.

Charter Arms Bulldog
.44 Special At 21 ounces, this gun is a little larger than the smaller .38 Specials, but it uses a much larger cartridge—the .44 Special, which can be a formidable round for defense. With some of the newer ammo, like Hornady’s Flex-Tip loads, it’s an excellent personal-defense cartridge.

North American Arms
.22 Long Rifle Mini-Revolver This revolver is so small that I carry it in my pocket like a pocketknife. It weighs 4.5 ounces, and most of the time I forget it’s there, which is part of its charm. While I have finished off wounded game with it, I mostly think of it as a last resort, hideout gun.