Will Scaring Asian Carp Prevent them from Spreading? 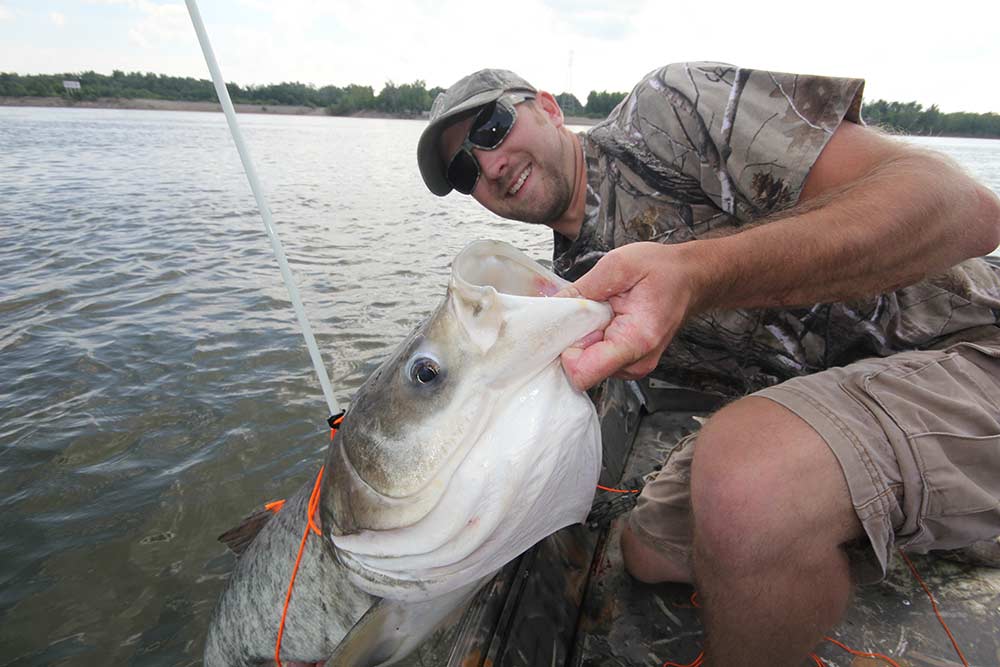 The popularity of carp as table fare in the U.S. has never been high, but that could change as some entrepreneurs continue to develop dishes using Asian carp. Will Brantley
SHARE

The recent federal government shutdown put a temporary halt to the effort to install an “acoustic deterrent system” and “bubble wall” at Lake Barkley’s lock to stop invasive Asian carp from entering the western Kentucky impoundment. Originally scheduled to begin in February, the project now has been rescheduled for later this spring.

Amy McGovern, Aquatic Invasive Species Program Manager for the U.S. Fish and Wildlife Service’s Midwest Region and the project manager, says that barring any more delays the system should be ready for installation in the lake’s Cumberland River tailwaters in March or April.

“We’re just finishing the system’s design and a contractor and the U.S. Army Corps of Engineers will be involved in the installation when everything’s ready to go,” says McGovern, who returned to work in late January after being out five weeks due to the shutdown.

The anti-carp hardware will be installed on the bottom below the entrance to the lock and span the channel. Researchers hope an air compressor that produces bubbles continuously, along with a blaring underwater sound machine, will deter the bighead and silver subspecies of Asian carp from wandering into the lock and ultimately gaining entry into the lake. The Kentucky Department of Fish and Wildlife will help monitor the success of the Bio-Acoustic Fish Fence, which first was used in Europe to steer spawning salmon away from water intakes and dams, and help them migrate upriver.

Lake Barkley is considered a suitable testing ground because it is already infested with the carp. Kentucky Lake, which is connected to Barkley by a canal, also is home to thousands of the fish.

Kentucky officials are apprehensive that Asian carp will become so abundant in the twin lakes that native fish will be displaced and fishing tourism – which depends mainly on bass and crappie fishing – will suffer. It’s believed the carp locked into to the lakes by accident beginning a few years ago via the Cumberland (Barkley Lake) and Tennessee (Kentucky Lake) rivers, which flow into the Ohio River near Paducah. The fish have infested all drainages of the Mississippi River and threaten the Great Lakes.

Silver carp are often referred to as “jumping carp” because of their propensity to leap clear of the water when a boat approaches or they otherwise are startled. Both species get large. Given optimum conditions, mature bighead carp can grow to more than 4 feet long and 80 to 100 pounds in weight. Thus, the fish pose a threat to recreational boating and other water sports. Their aversion to noise and bubbles might prove to be their undoing, if the Barkley project is successful and paves the way for similar efforts in other threatened waterways. That includes the Tennessee River chain, which begins in eastern Tennessee and involves nine lakes. Kentucky Lake is the last impoundment in the series, and each of the other reservoirs also have lock systems for boat and barge traffic. Upriver, Pickwick Lake is the next impoundment in the chain.

Carp on the Menu?

The carp are also considered a threat to native fish because they eat plankton, an important food source for juvenile indigenous sportfish and baitfish. Various native species consume small carp, but given their quick growth rate, the fish are only vulnerable for a relatively short time.

Asian carp are important food fish in China and India, and attempts to supply that market with carp grown in U.S. waters is currently underway. The sheer abundance of carp in Barkley and Kentucky lakes, and the demand for them in Asia, suggest that the fish flood can be controlled. Last year, Kentucky’s commercial fishermen netted more than 2 million pounds of Asian carp, of which about 80 percent came from Barkley. Elsewhere, especially in the Midwest, commercial fishermen net millions of pounds of carp annually. Most of the fish are turned into fertilizer, pet food, or bait. However, attempts are being made to cultivate a taste for the fish among the American public in a “try-it-you’ll-like-it” campaign that’s just now gaining momentum.

Fish-processing houses have been opened in Wickliffe and Eddyville, Kentucky, and commercial fishermen are being paid between 15 and 22 cents per pound for fresh carp, which includes a subsidy of 15 cents per pound paid by the state of Kentucky. In 2018, fishermen received $36,136 in subsidies. That’s a miniscule amount compared to what might be lost to the state if the fishery is eroded to the point that the annual flood of tourist anglers slows to a trickle.

So far, there isn’t much demand for the carp in the U.S., but that also could change. Various entrepreneurs have developed dishes with Asian carp as the main ingredient. Their flesh is considered greatly superior in taste to that of the common carp, native to Europe and China and introduced into U.S. waterways beginning in the latter half of the 19th century.

Largely in the U.S., common carp are considered to be poor table fare. Where Asian carp swim around in the water column and near the surface feeding on phytoplankton, common carp feed on zooplankton they shovel up on the bottom. Depending on their environment and age, common carp develop a “muddy” taste. However, their reproductive rate isn’t as prolific as that of Asian carp, and their young are more susceptible to predation because they don’t grow as fast as bigheads and silvers.

The Lake Barkley study will go on for three years and supply researchers with ways to mitigate the effects of the Asian carp infestation in the eastern U.S. Electrical barriers in various rivers along the Great Lakes shorelines are presently used as deterrents to keep Asian carp out. The bubble-and-sound-barrier approach might offer a cheaper, more effective alternative.

“How do we measure success? Good question,” says McGovern. “It’s sort of a before-and-after answer. We know what the densities [of carp] look like now and in the future we’ll measure the number of carp above the bubble wall and see what affect it has. We might try different things and see what is working and what’s not. It’s not going to get any better until we find something that works the way we hope it will.”

Displacing the carp is one thing; getting rid of them permanently is another. Hopefully, commercial fishermen and a burgeoning market for Asian carp will take care of that part of the solution.