Aaron Martens is as laid-back as laid-back gets, but he was clearly getting frustrated with the Smith Lake spotted bass.... 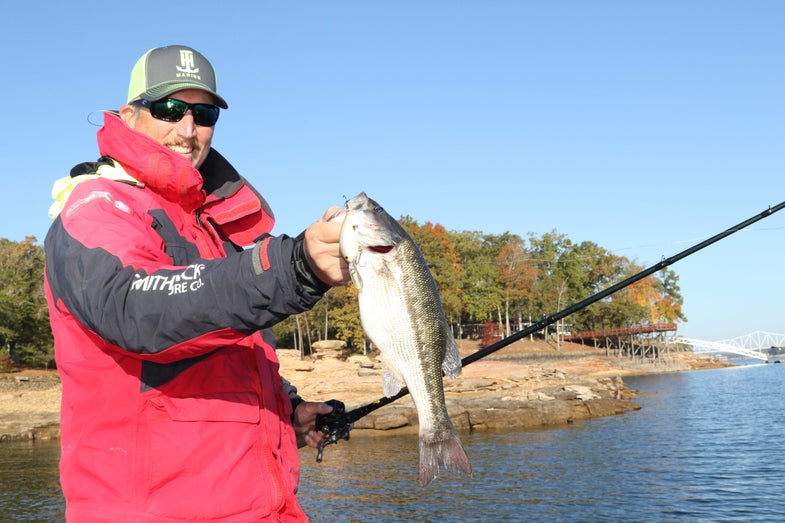 Aaron Martens is as laid-back as laid-back gets, but he was clearly getting frustrated with the Smith Lake spotted bass. The fish were pushing shad to the surface, but always just out of reach of his longest cast.

Each time we tried to ease over to the activity, the fish would sound and the opportunity vanished. After 30 minutes of exasperation, Martens offered a tip all anglers should consider.

“I shouldn’t be chasing breaking fish,” he says. “If you watch, they seem to be feeding in particular areas, so you usually do better by sticking it out on one of those spots.”

A good strategy for anytime of year, Alabama tournament stick Jimmy Mason refines this thought by pointing out the wisdom of finding compression zones — zones where bass use depth and bottom contour to round up their meals.

“The fish will use areas that rise from deep water to shallow breaks and they’ll actually work together to corral the bait,” Mason said. “It’s like chasing a puppy and pinning him against the wall so you can catch him.”

Think like a football defensive back. Chasing a fleet-footed receiver from behind is often a losing proposition; but a pursuit angle that cuts off the field and forces the sprinter out of bounds gets the job done.

As Mason notes, the fish will run the same pattern repetitively. That’s what Martens and I saw that morning on Smith. Graph the bottom, find the prominent spots abutting deep water and when you spot bait schools, envision where the fish will compress the playing field.

Food doesn’t go unnoticed, especially during winter’s lean months. So stick close to the likely spots and look for your chance to intercept the bass.