How To Teach Survival Skills To Children

Does your child know what to do if he or she gets lost in the woods? Read this to find out. 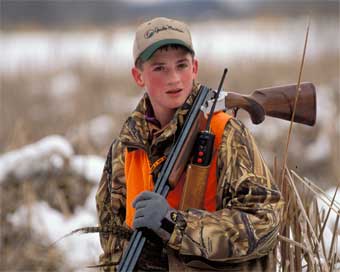 March 17, 2007 was the day everything went wrong for 12-year-old boy scout Michael Auberry. That was the day he wandered away from camp, curious about what lay beyond his vision of the forest. That was the morning that lead to four days and three nights alone and cold in the mountains of North Carolina, with overnight temperatures that dipped into the 20s. A search began immediately after the boy went missing, with lots of boots on the ground, a platoon of tracking dogs, and heat-sensing aircraft flying overhead. Frantic parents and scout leaders worried and prayed and searched. Finally, young Michael was found about half a mile from camp by a 2-year-old tracking dog named Gandalf. The boy was weak, but otherwise in good condition. He was lucky to be alive.

Not long ago (summer ’05) the nation’s attention was drawn to the plight of 11-year-old scout Brennan Hawkins, who was lost for four days at 8,500 feet in the rugged Uinta Mountains of Utah. Brennan managed to slip away from his group and, when he failed to show up for dinner, scout leaders initiated a search. Over the following four days, the search and rescue effort intensified and included hundreds of professionals and volunteers. Fortunately, the lad was found – or rather, he found the searchers, when he stepped out onto a road right where volunteer search team member Forrest Nunley was riding his ATV. The boy was five miles from where he had last been seen.

August, 2004. Just a year before Brennan Hawkins went missing, another young man named Garrett Bardsley disappeared in the same area. He was fishing with his dad, got his shoes wet and went back toward his camp, which was about 200 yards away, to change them. Somewhere in that 200 yards he became lost, and no trace of him was ever found.

[pagebreak] The question is, how do these youngsters get lost? How do they manage to slip away from their families or camping groups and disappear? And then, why are they so hard to find, even though massive search and rescue resources are employed in the effort? But the most important question of all is: what can parents do to protect their children from these episodes?

The answer to the first question is that getting lost is easier than one might think. For children, getting lost can be caused by something as commonplace as curiosity, a spirit of exploration. Even for adults, all it takes is a momentary loss of concentration and the trail can slip out of sight. From then on, the individual can end up beating through brush, every step taking him farther away from the thin brown line of a trail that snakes through the forest like a camouflaged thread.

Even if the child comes across a trail, that doesn’t mean it’s the right one. The forests are webbed with faint trails, some of them made by game. For a youngster, trying to discern which trail is the right one can be a daunting task. And not only for youngsters, but for older, more experienced outdoorsmen as well. Getting lost is amazingly easy.

[pagebreak] In fact, Brennan Hawkins did stick with a trail, and he still managed to get lost for four days. According to the boy’s mother, Jody Hawkins, her son had always been taught that “if you get lost, stay on the trail.” That is excellent advice, so he stayed on a trail, but it obviously wasn’t the one that lead back to camp. Staying with a trail is a first tenet of survival when you’re lost, because when a search is on, every trail will be scoured. Eventually, the trail the Hawkins boy was using led to the road where the ATV search party found him.

There is a possible clue as to why it took so long to locate young Brennan Hawkins. According to his mother, the boy might have been purposely avoiding searchers. Children are often taught to avoid strangers. “We’ve also told him don’t talk to strangers,” Mrs. Hawkins said. “When an ATV or horse came by, he got off the trail. When they left, he got bacon the trail. His biggest fear, he told me, was someone would steal him.” The boy’s uncle, Bob Hawkins, said that Brennan might have been afraid to contact the searchers because they weren’t using the password the family had adopted.

It’s a shame that we live in a day when children have to be so afraid of strangers that they fear it may cost them their life to call out to someone who could help them. Parents need to come up with a workable solution to this problem. Perhaps one way for parents who are teaching their children how to survive in the woods is to take a balanced approach and work with separate scenarios – one for dealing with civilization and another for dealing with being lost in the woods. Under most conditions, it’s important for youngsters to understand that they shouldn’t talk to strangers. But they must also know that there are times when they might need to trust someone they don’t know. One of those times is when they are lost in the woods.

[pagebreak] In addition to teaching children how to deal with strangers, there are two other vitally important outdoor skills that should be taught to all the members of the family. One is when and how to take shelter from the elements. Being skillful at improvising a shelter can save their life. But there is a secondary concern, aside from the benefit of avoiding hypothermia. Some youngsters may conceal themselves so well that searchers can walk right past them and never see them. Kids should be taught that if they hide under a log or in some other natural shelter, they should leave some highly-visible indication of their presence out in the open, where searchers can see it.

And that leads to the other big issue that should be taught to all who go out into the wilds – how to signal for help. There are passive ways to signal, and there are active ways. One of the best passive methods is to dress in bright, highly-visible clothing. Carry a brightly-colored backpack. Make sure all of a child’s equipment is vibrantly colored, so it can easily be seen at a distance through the woods. Active signaling techniques that are appropriate for children include the use of signal mirrors and noisemakers such as small compressed-air horns and whistles.

If a person becomes lost, he or she should stop immediately and begin to do everything possible to call attention to himself or herself. If the youngster has a Space Blanket, it should be spread out to serve as a sheltering cover and a passive visible signaling device at the same time.

A combination of passive and active signaling techniques should be employed as soon as the individual realizes that he is lost. Place colorful or shiny items out in the open, where they can be seen from a distance. Dig out the signal mirror (children should be instructed in the proper use of this beforehand) and the signal whistle. Blow three blasts on the signal whistle, then stop and listen for a minute. Then blow again. Parents and children should both have whistles, so they can signal to each other. When using the signal mirror, the youngsters should sweep the beam of reflected light across the forest in the direction toward which they think camp or the main trail is located.

Youngsters should be taught to stay put and await rescue, even though it might be tough to do. They should avoid the temptation to start hiking in search of camp. When the search is going on, a wandering victim might walk right out of the path of rescuers, or perhaps into an area that has just been search and will therefore be ignored in the future.

The best way to survive is:
— Stop and stay put
— Do everything possible to make yourself seen and heard
— Shelter yourself from the elements
— Be patient and wait for rescue. It is coming.