A Beginner’s Guide to Gigging Frogs

All you need is a gig and some determination

There may not be a more simple outdoor pursuit than frog gigging. All you really need is a gig, a light, a warm summer night, and a little determination. Having a couple of enthusiastic youngsters along doesn’t hurt matters at all.

When I found out that the Ohio Division of Wildlife had scheduled a frog gigging seminar that would include instruction on stalking, gigging, cleaning, and cooking frogs I asked my two sons, ages 11 and 13, if they wanted in. Naturally, they both enthusiastically accepted—though they might not have immediately realized what they had signed up for. But, heck, what goes together better than kids and frogs?

Fortunately, the hands-on seminar was first class. However, as the instructors continued, my sons kept one eye on the sky as it slowly darkened. They were itching to get their feet wet. So when the seminar leaders announced that it was time to gig, I could barely hold them back. When we arrived at the pond, most of the participants skirted the shoreline searching for frogs without much success. Then my younger son, Eli, broke from the group and plunged into the muddy waters fixated on a frog. The seminar leader guided him into place by spotlighting the unsuspecting target. Then Eli drove the gig six inches through the frog exactly as he was taught. Evan quickly followed by wading through the waist-deep water to gig his own frog. They were a determined pair for sure.

We might not be able to compete against the guys from Duck Dynasty, but we sure learned a lot about an outdoor pursuit that’s become something of a lost art. Oh, and did I mention that fried frog legs taste pretty darn good? Here’s a closer look at our night of gigging and some tips we picked up at the seminar.

There are many gig head options, but the most important thing is to pack an extra gig so that if you bust one off on a rock, you can replace it and keep hunting. Your pack should also contain bug repellent and a handheld light to scan the water for frogs. Bullfrogs have yellow throats and green frogs have white throats. Also, take along something to store your kill, such as a potato sack, which contains mesh allowing the water to drain. 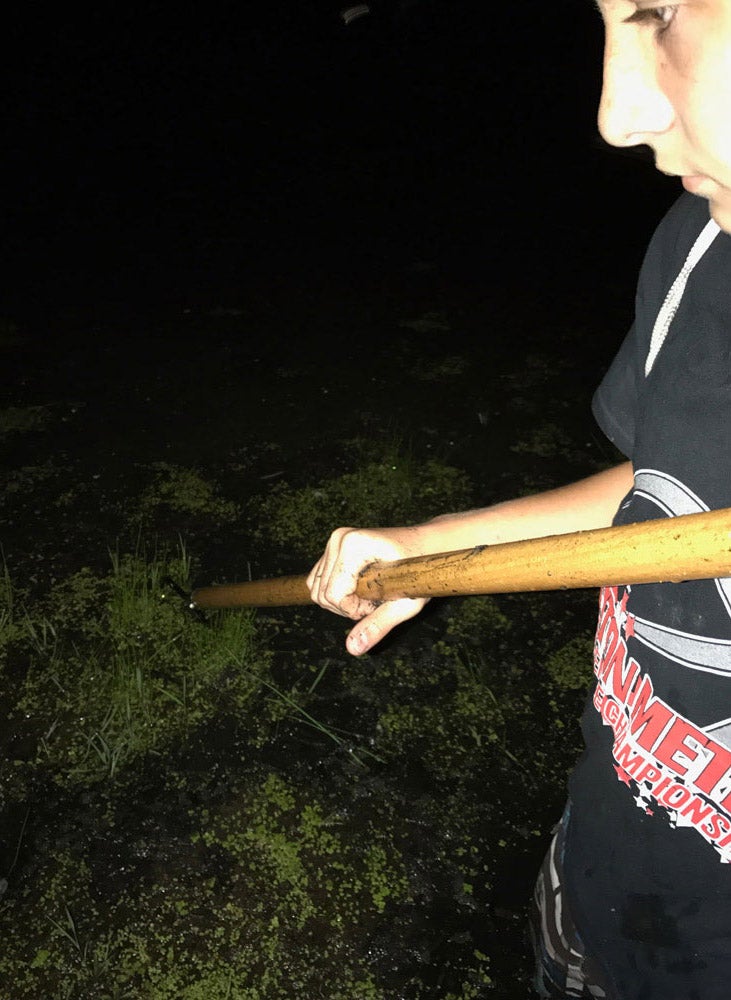 If you are hunting with a partner have them blind the frog so that you can stalk the frog from behind. 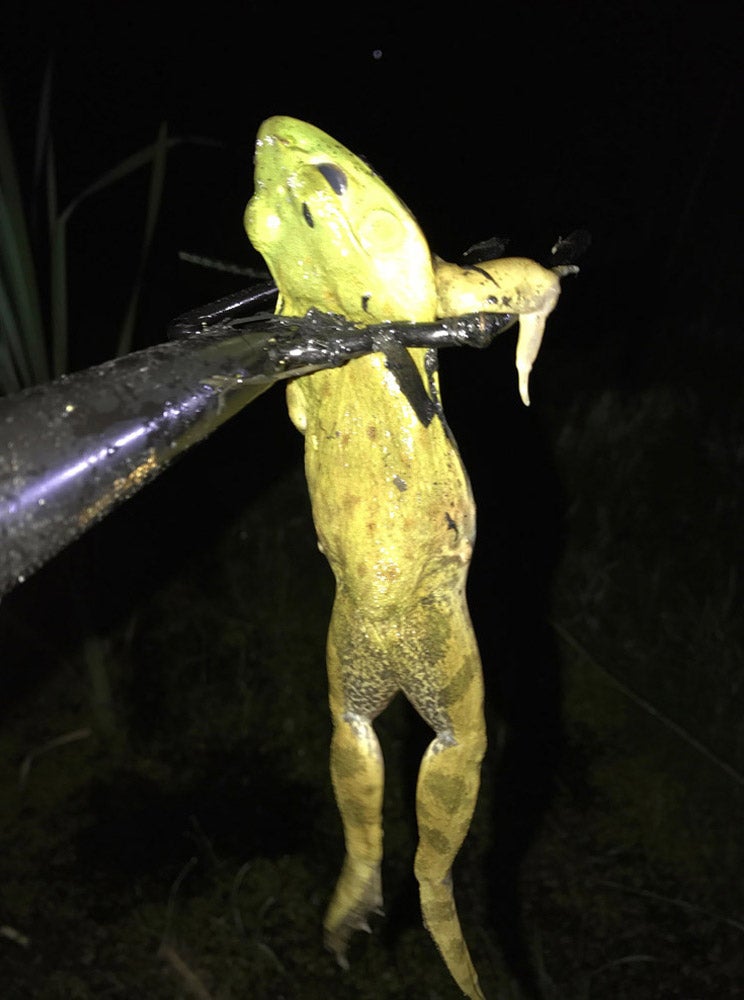 Once you are in position, try to drive the gig at least 6 inches through the frog to make sure you stick it. Aim for just behind the ears. 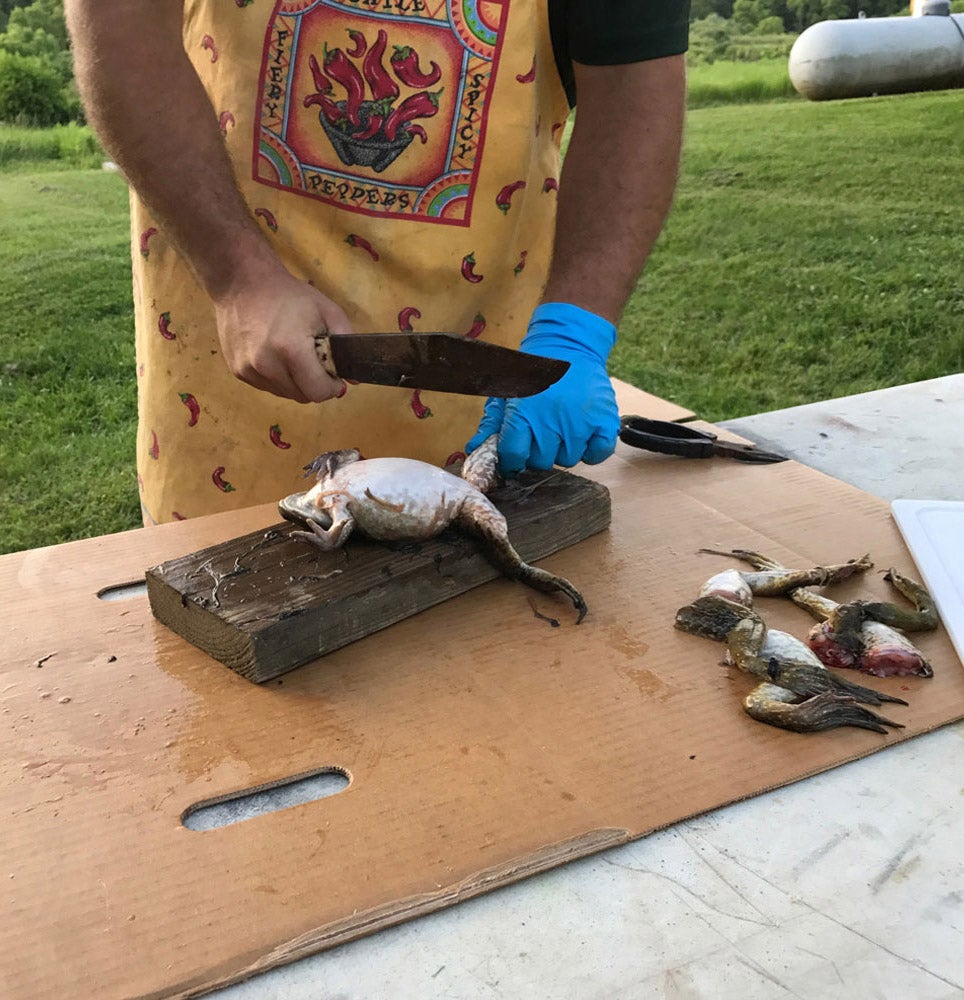 To prepare your frog, start by chopping off the hind legs at the ball joint. You can use game shears, a hatchet, or a knife. 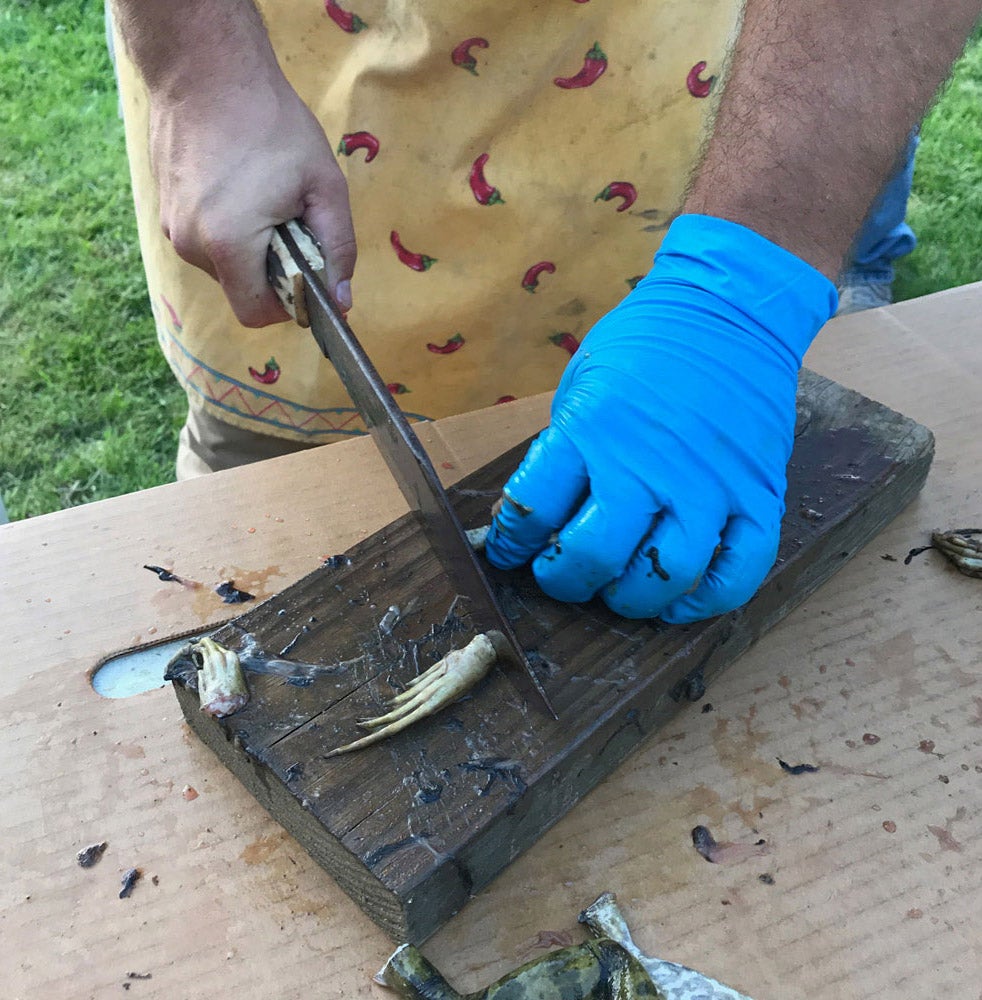 Then clip the feet. 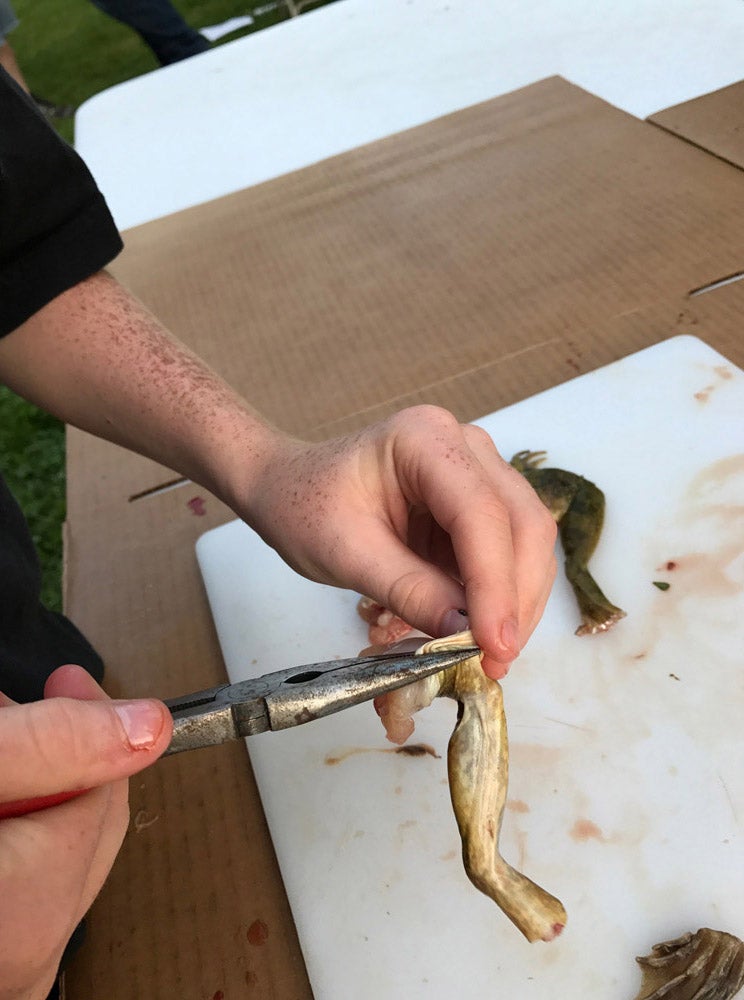 Finish by removing the skin. Needle nose pliers are excellent for this. 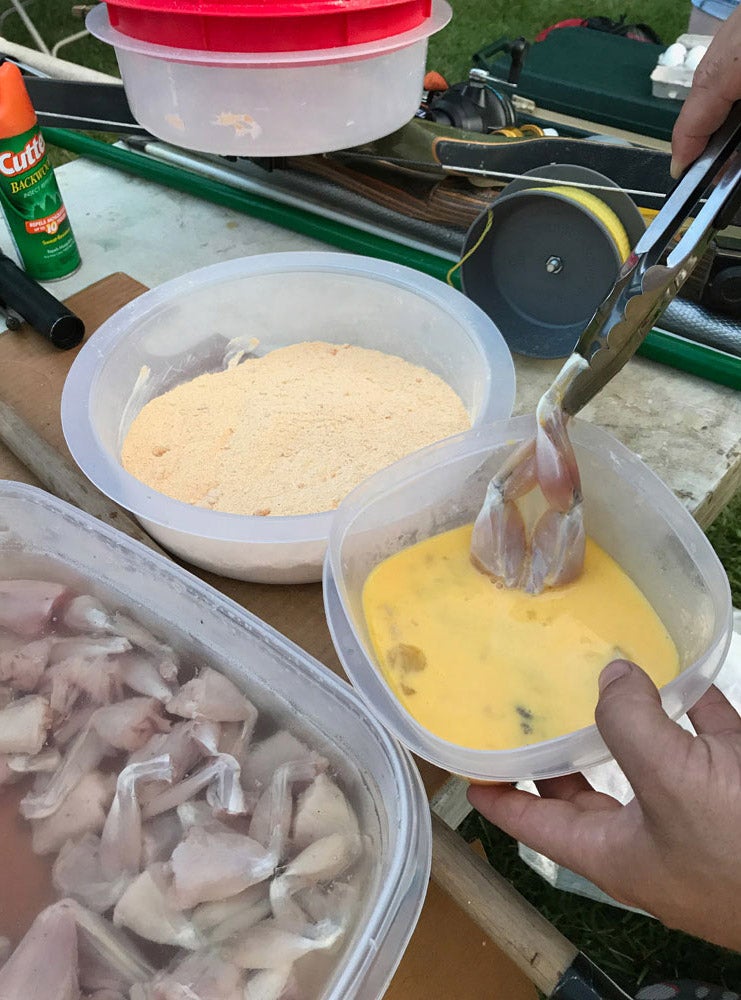 Roll the leg in egg and then in your favorite breading to prepare for frying. 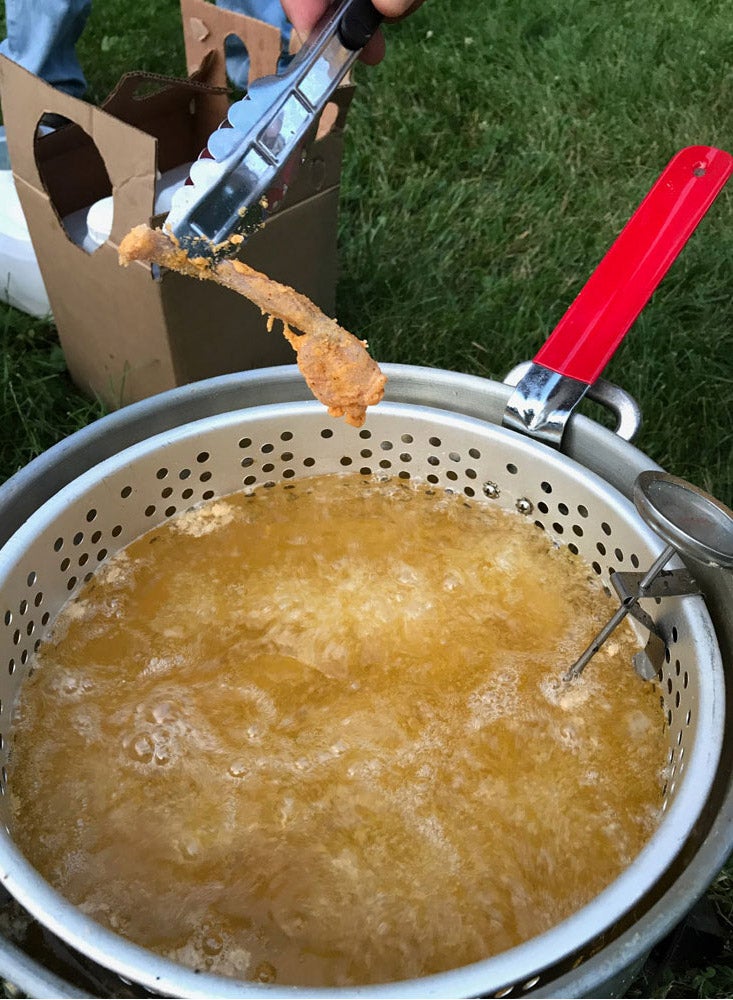 If you are using a deep fryer try cooking at about 250 degrees F.