Reed Hansen of Groveland, Florida is a world champion wakeskater. When he began training, he was in need of a... 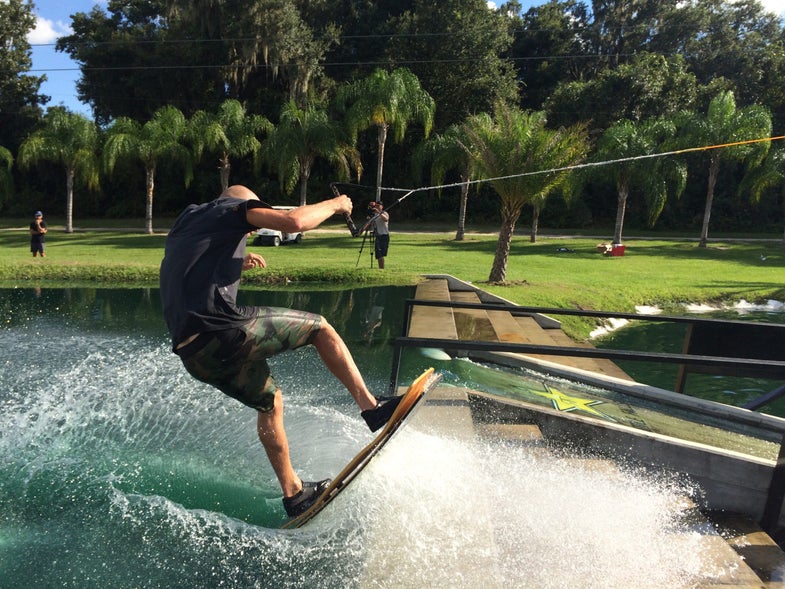 Reed Hansen of Groveland, Florida is a world champion wakeskater. When he began training, he was in need of a nearby place to practice and have fun. Working with his father Andy, Reed built a wakeskating pond known as Battle Falls in his own backyard. Watch Reed give Mark Wills a lesson on Wakeskating and an inside look at his “extreme” backyard.

Reed Hansen, a Groveland, Florida native, has been around the water his whole life. His parents, Andy and Joni Hansen bought a waterski school and converted it to a wakeboard school when he was three years old. Reed first learned how to wakeskate in 2000, but it wasn’t until 2004 that he became hooked. In 2008, Reed became the second person to sweep three Toe Jam events in one stop – Cable, Boat and PWC (Personal Water Craft). Additionally, Reed is a seven-time World Champion, a three-time National Champion, the 2011 Alliance Rider of the year and four-time Wake Games reigning champion. Reed is currently ranked 4th in the world and recently placed third at the Wakeskate Tour finale at Battle Falls (his own stomping grounds) in September– his third podium finish at the competition in three years.

Wakeskating is a water sport that combines skateboarding techniques with the conditions and atmosphere of wakeboarding. Unlike wakeboarding, the rider is not bound to the board in any way, which gives the sport its own unique challenges. A similar concept of wakesurfing/freeboarding dates back to the late 1970’s and early 1980’s but wakeskating officially began in the 1990’s. By the late 1990’s people were starting to recognize the sport but it didn’t begin to take off until 2000. In 2001, DVS Shoe Company released the first wakeskate specific shoe. In 2002, Cassette and Hyperlite released the first concave wakeskate and the number of competitions began to rise. Numerous wakeskate competitions and tours are held throughout America each year as the sport continues to gain more competitors and fans.

Combine the excitement of wakeboarding with elements of skateboarding and what do you get? Wakeskating! Like wakeboarding, the rider is on a single board. But like skateboarding, he or she is not attached to the platform, allowing for extreme jumps, twists and tricks.

Reed Hansen of Groveland, Florida, is a world champion. But he needed a nearby place for practice and fun. Working with his father Andy, Hansen built an extreme backyard wakeskating pond known as Battle Falls. “I wanted a place to ride any time,” says Hansen.

Starting with an empty field behind their house, “the first step was to buy a Bobcat and start digging,” Hansen laughs. “I designed everything in my mind as we dug.”

“Dad and I did the digging, grading, pond liners, water pump, concrete dam under the stairs, tower footers, design and landscaping,” he says. “We contracted out the stairs and the electrical. I didn’t feel like getting killed trying to wire 480,” he jokes, “and I wanted the stairs to look nice.”

A cable and winch system pulls the wakeskater. “The cable system is a Sesitec,” says Hansen, “a company that sponsored me for the project. I helped them put it up.”

“There are no official standards for a wakeskating pool,” says Hansen, “just guidelines in depth and length that are good for riding. Battle Falls is 215 feet long, 80 feet wide at the bottom and 50 feet at the top. Where you land in the bottom pond it is 8 feet in depth but that immediately gets shallower so you can walk out of the deep end if you fall. The top pond is 6 feet deep.”

“It took six months to build Battle Falls. But that was three slacker months,” Hansen grins, “and three hard months.”

“The biggest challenge was designing the water ramp to have the right amount of water on it,” Hansen reports. “It took a lot of guess work, but came out perfect.”

Perfect. Just like long afternoons spent in an extreme and watery backyard, doing tricks and having fun with friends under the Florida sun.