UPDATE: Tred’s biggest problem at present is lack of sleep. Hospitals just won’t let you. He’s been undergoing a legion... 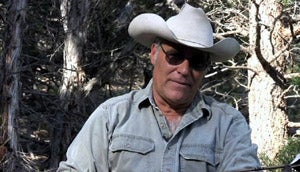 UPDATE: Tred’s biggest problem at present is lack of sleep. Hospitals just won’t let you. He’s been undergoing a legion of tests trying to determine the cause of his spinal stroke with no determination so far. Understandably, he’s feeling dejected. However, tomorrow he transfers to Craig Rehab hospital, one of the most loving, positive atmospheres anywhere on earth. Hopefully they will boost his spirits AND let him get some sleep. He complained of pain and nothing among the almost 30 different pain medications helped the pain and his body hated it as well, resulting in allergic reactions. He also hasn’t eaten for days and without chocolate milk and peanut butter and jelly, he gets VERY depressed. Anni also requires your prayers as being stoic and positive throughout all this is an equally tough job. She, too, needs sleep and consideration, PLEASE keep all your positive energy, prayers and good thoughts channeled toward them.–Dean Travis Clarke

Outdoor television personality Tred Barta has been hospitalized in Colorado after suffering a spinal stroke.

“Just got off phone with Tred Barta and wife Anni. He had packed to travel to Alaska for a bear hunt for his TV show. Put his bag in his truck, Returned to house and then on way back to truck felt loss of feeling in his left leg. Decided to walk up mountainside behind house to make sure he could handle the rigors of hunting in Alaska before getting on plane. Condition worsened, so he immediately went to doctor. Doctor ordered ambulance to take him to hospital where MRI, CT scan, etc determined he’d suffered a spinal “Stroke.” Quite rare – afflicting approximately 12 of 100,000 people in the U.S. each year.

“Within four hours, he had completely lost feeling in both legs up to a point halfway between his chest and navel.

“Tred and Anni seem to be taking turns being supportive and dejected. Fortunately, they seem to balance each other that way. He will soon be transferred to Craig Rehab Center in Denver. Craig is a non-profit freestanding hospital that has been rated every year in the Top Ten Rehabilitation Hospitals by US News and World Report since the ratings began eighteen years ago.

“Though last night was tough, today finds some encouraging signs. He has been able to respond to stimulus causing his toes to curl. The paralysis has lowered to about navel level. He seems to have regained some slight sensation in his right leg. Results of blood and spinal fluid tests also seem encouraging.

“He seems remarkably positive and upbeat this morning. Keep them in your thoughts and please live YOUR life as though this could happen to you tomorrow!”