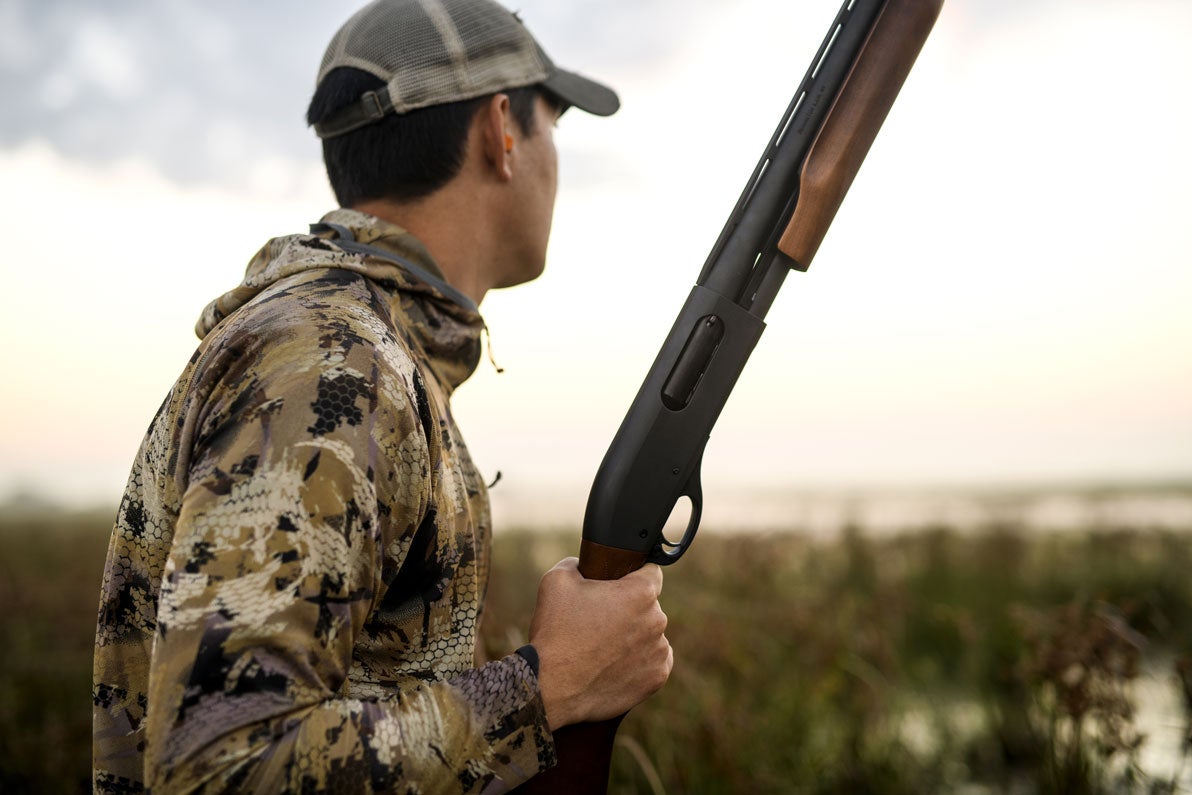 A pump shotgun ain’t fancy, but it sure gets the job done

A pump shotgun is like your old reliable hunting truck. It might not be fancy. It might not have a lot of frills. But when you turn the key, it always gets the job done. They’re hunting tools for just about every season that you can count on to punch tags and fill the freezer.

That’s why many hunters have chosen a pump shotgun as their first shotgun, and it’s why many have chosen one as their only shotgun. A pump is simple, reliable, holds more shells than a break-action, and can be had at a reasonable price. What’s not to love?

On the subject of price, you could pay a lot of money for a pump with glossy walnut and gold inlay. But that’s sort of like putting chrome rims on your johnboat trailer. A pump should be used and abused. Yes, you get a lot for your money when you buy a pump shotgun. To give you a better idea of just how much you can get, we put together this list of the best pump shotguns for less than $500. Many of these guns can also be purchased used for hundreds less, but if you’re headed to the local gun shop, here’s what $500 will get you.

The Remington 870 is the greatest shotgun of all time. Period. And while higher-grade versions of the 870, such as the Wingmaster, are available, it’s the Express that continues to make the 870 the first and last choice among legions of outdoorsmen.

Ultra-reliable, the 870 can be configured thousands of ways thanks to myriad aftermarket accessories and the gun’s simple breakdown design. You can buy one action, a couple barrels and an extra stock and change the gun from a clay buster to a turkey killer to a home-defense firearm. But at its price, why bother, when you can buy one for each task and still have cash left over for ammo.

One of the key features of the 870 that make it so durable and reliable is the double action bar design. When you pump the gun, parallel steel bars connected to the forend slide back into the action to operate the mechanisms that eject the spent shell and load the next one. Dual bars prevent racking and promote smooth operation. Look for these models used, now that times are changing at Remington and for Remington shotguns.

There are shotgun fans, and there are Benelli fans. Their typified by their affinity for ultra-durable guns that can withstand anything a hard-core outdoorsman can dish out.

The company is best known for its inertia-operated autoloaders, but its Nova series of pump shotguns, with its sporty lines that once garnered adjectives such as “futuristic” or “progressive,” is one of the kings of the modern family of tactical-inspired field shotguns. But that look isn’t simply cosmetic. Benelli maximized the ergonomic performance of the gun with deep grooves in place of traditional checkering for a solid grip, a wide trigger guard for use with gloves, and a contoured forend that fits anyone’s hand. A one-piece stock and receiver help keep out the weather and make this a nearly indestructible gun. Various models range in price from $449 to $569.

If the Remington 870 is the Superman of the pump world, the Mossberg 500 is Batman: a superhero with a little more attitude. Prior to the recent trend of manufacturers offering tactical models straight from the factory, the 500 was the top choice of hunters who wanted a pump shotgun they could take to the field one day, then trick out with the latest aftermarket tactical swag when they got back home.

Thousands of accessories are available for the 500. There are even online forums dedicated to doing just that. And rest assured that if you buy one, you’re getting a proven gun. Mossberg has sold more than 10 million models of this classic pump.

The company offers several series at different prices, but the basic 500 All-Purpose pump action starts at $401.

Imagine a shotgun with the proven reliability of the Remington 870 action, an armor coating that’s impervious to water and abrasion, and an ergonomically designed synthetic stock that gives you good hold even in bad weather. Would you buy that gun?

If so, check out the Remington 887 Nitro Mag. Designed not to replace the 870 (what gun could do that?), but to complement it, the Nitro Mag might be a waterfowl hunter’s dream gun. It has pump-gun reliability crossed with a modern look and Remington’s ArmorLokt coating, which the company says covers all external parts, so moisture, mud, and the abuse of decades afield won’t even scratch the surface. The standard model starts at $436.

Winchester brought us the Model 12 pump-action shotgun, one of the greatest firearms of all time, so the company knows a little bit about designing pumps. Its Super X Pump (SXP) series of shotguns shines above all others for something that often gets mentioned only when discussing autoloaders: the speed of its action.

Winchester created an inertia-inspired action that relies on the rearward momentum created by the shot to help the shooter cycle the action faster. The company says the gun can be fired three times in a half-second in trained hands.

The Black Shadow model is a top deal in the firearms world. It has a non-slip textured stock, a rotary bolt with four lugs for solid lock-up and a drop-out trigger assembly for easy cleaning access, all for $379.99 with a 3-inch chamber and $399.99 with a 3½-inch chamber. Other models are also available.

The Mossberg 835 Ulti-Mag scratches the “magnum” itch that befalls many serious waterfowl and turkey hunters.

It’s chambered for 3 ½-inch shells, so there’s no shotgunning task it can’t accomplish. A ported barrel helps to alleviate some of the shoulder-bruising boom-boom of big shells. Several specialty models even come with Mossberg’s adjustable LPA trigger system, which lets you dial in the weight of the trigger pull.

Weatherby’s product development procedure for the SA-08 pump shotgun went something like this: Shoot it until something breaks, fix the problem and repeat. The company continued this process until it ended up with a gun that fired more than 6,000 rounds.

Why 6000 rounds? That’s what the company equates to 10 to 20 years of normal field use—without a failure. In fact, everything in the gun is designed for longevity: chrome-lined barrels, a dual-bar action (like the Remington 870), a black-anodized receiver machined from a solid billet of alloy material, and a drop-out trigger mechanism that won’t frustrate you when it’s time to clean.

This Turkish-made gun comes in a handful of finishes, including black and camo. My personal favorite is the PA-08 Upland with its walnut stock, but it’s difficult to find these days. If you do find one, you’ll be treated to some of the sexiest wood you’ll find on a gun in this price point, complete with 22 lines-per-inch checkering.The Upland model is $449, while the synthetic version is $399. ––Curtis Niedermier

Owner Gus Bader will often just snag a random gun off the production line at TriStar and put it through the ringer to make sure it shoots straight and functions properly. One thing I consistently hear from TriStar shooters is the incredible fit on these guns. I’ve shot a few of their over/unders and the auto-loading .410, and came away with the same opinion. The Cobra III doesn’t have the high-end feel of a Remington 870 Wingmaster, but the wood and steel Field model competes with the quality of an Express. It’s a damn reliable pump built by a company that caters to the average hunter (MSRP is $315). It’s available in 20- and 12-gauge, and there is a Turkey model in addition to the Field. —Joe Genzel

Why spend $8,000 on a shotgun? Performance, of course. Comparing a $300 pump gun and a high-end over/under is like pitting a Prius against a NASCAR track burner.

The best shotguns are designed for handling and performance when it counts. There are many high-end shotguns I could have profiled, but I’ve chosen the Beretta DT11, which is available in skeet, sporting clay, and trap configurations. You’ll see DT11s in the hands of Olympic champions like, Kim Rhode and Vincent Hancock, and other top shooters. Every detail—from the meticulous fitting of parts to stock dimensions, internal barrel configuration, and action design—comes together to make a top-line shotgun. It’s the worth the sticker shock, if you need the top end performance. The bottom line is that an expensive gun provides incremental performance increases, but the key factor is the shooter.