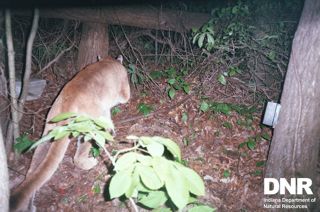 Just weeks after implementing a new department policy designed to consistently and systematically investigate public reports of mountain lion sightings in the Hoosier State, the Indiana Department of Natural Resources Division of Fish and Wildlife has confirmed the presence of a mountain lion in rural Greene County.

It marked the second time the department has confirmed the presence of mountain lions in the wild in Indiana, both times based upon photographic evidence.

In the most recent case, a trail camera recorded multiple images of a single mountain lion on May 1. In late 2009, DNR biologists investigated and confirmed the presence of a mountain lion based on a photo taken by a Clay County deer hunter from his treestand.

In both cases, biologists were unable to determine if the animals were wild or had escaped from confinement.

In announcing the confirmed sighting this week, the DNR explained that it plans to develop a consistent procedure to investigate reported cougar sightings and to institute a formal data collection and storage system.

“More than anything, it was prompted by increased reports of mountain lions migrating east, specifically out of South Dakota,” said Gary Langell, the DNR’s private lands program manager and developer of the mountain lion policy.

“At that point, it becomes more apparent we could have mountain lions show up in Indiana,” he said.

Since the policy’s inception on March 1, 19 mountain lion sightings have been reported in Indiana. The sighting in Greene County is the only one confirmed since the new procedures have been established.

Presently, mountain lions are a protected species in Indiana, but state law allows a resident landowner or tenant to kill an animal that’s causing damage to owned or leased property and livestock.