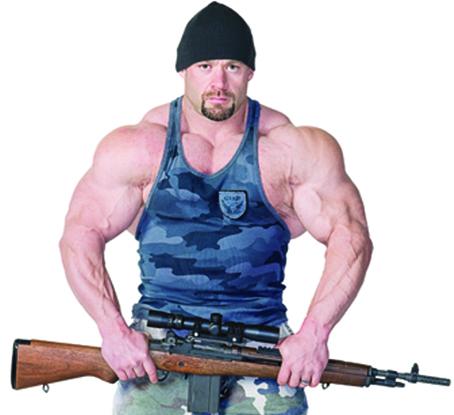 ▶ My father first took me deer hunting when I was four or five years old. When I was six, he bought me my first shotgun and took me quail hunting. And it all just progressed from there.

▶ I grew up on a ranch in West Texas, so we always had wild game in the freezer. I practically grew up with hunting, and it was always a part of my life. I didn’t even get into lifting weights until I was a freshman in high school. Hunting was my first passion in life.

▶ Very few bodybuilders are also outdoorsmen. I can only think of a couple others. It’s a rare thing, because bodybuilders can be pretty–how should I put it?–self-absorbed. Bodybuilding is really unlike any other sport. Between the training, the lifting weights, the cardio, the nutrition, and the posing practice, it’s a 24-hour job. And a lot of bodybuilders don’t really diversify from that. It’s tough to be somewhere, like in the field, where you can’t eat and you can’t train.

▶ I have an American bulldog, and I used to take him hog hunting. He was a catch dog. Seeing how the bay dogs work and how the catch dogs work, and how they all depend on you, and how you depend on them–that was always the best part.

▶ Every year, I go to Wyoming, where a friend of mine has a ranch that has a buffalo herd roaming on it. It’s a huge spread. I go up there and kill a buffalo and I also get a few whitetails and an elk, and that’s what I diet on for the year–wild buffalo, venison, and elk. I eat probably 3 pounds of meat a day.

▶ I grind up most of the meat. It’s super-lean–as lean as chicken–but it’s red meat, so it tastes better. I use wild game as my main source of protein when I’m training.

▶ My dream hunt has always been a Kodiak Island bear hunt, and I’m doing one this year, in October. It will be a 10-day hunt. We’ll hunt Kodiak browns, and we’ll film it for my show [The Hit List on Outdoor Channel].

▶ I’ve been hunting with the same rifle for years. It’s a Weatherby Mark V Accumark .300 Magnum with a custom barrel. It’s probably a little bit of overkill for whitetails, but I’m comfortable shooting it, and it always hits its mark.

▶ I had a friend who was in the military and into long-range shooting. He and I did a little trade. He customized my rifle, and I got him into shape.

▶ It’s tough having a film crew following you on a hunt. I might have my shot, but the cameraman might not have his. So sometimes there are missed opportunities. But I’m used to it. And I’m confident my Kodiak hunt will go well. I practically live in front of the camera.

From the April 2012 issue of Outdoor Life magazine.