Deadliest Cast: 3 Most Dangerous Places to Fish in the U.S.

Photo by Andy Anderson Some fishing grounds are mythic, not only for the quality of the fishing, but for the... 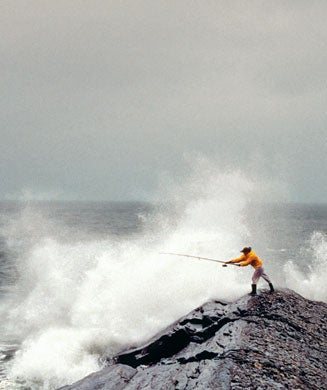 Some fishing grounds are mythic, not only for the quality of the fishing, but for the risks some anglers are willing to take to fish there. To be successful at these spots, you have to risk losing more than your favorite lure.

Samans Nou was striper fishing off Hazard Rock in Narragansett, R.I., one of the most productive areas on the Striper Coast, on a quest to catch the lineside of a lifetime. It was the end of August 2010, and the weather was nasty, which generally equates to tremendous fishing. A huge wave hit Nou and three other anglers casting from the rocks and washed them out to sea. The other anglers were rescued, but it was the last time anyone would see Nou alive. The 25-year-old’s body was recovered two days later.=

“What makes Hazard Rock such a great place to surf-cast also makes it extremely dangerous,” explains Narragansett Bay angler Jimmy Fee. “You have deep water very near the rocks you fish from. This makes accessing the fish easier for surf-casters. Plus, the water there can get really hairy, especially when the weather is bad, which is when the stripers are biting well. And this bay gets a tremendous amount of bait coming through. All of these things make Hazard the perfect spot to catch giant fish. But, man, it is treacherous, and caution must be taken.”

That’s because the rock formation deceives the uninformed. What appears to be a flat expanse of rock is really the top of an underwater cavern. The rocks are slick and the cave beneath creates incredible current and invites crashing waves, both of which are responsible for the majority of drownings here.

If you are going to take the risk of fishing Hazard, Fee has some advice.

“Respect the threat. I have heard screams in the darkness from a man who was swept out to sea and drowned. You have to know that it can happen to you and prepare accordingly. Wear jetty cleats for the best grip on the rocks. Wear a wading belt so your waders don’t fill up with water. Wear a dry top that is tight at the neck and cuffs. And if a wave pulls you in at Hazard, resist the urge to swim back to the rocks—you will get beaten to death. Instead, swim out to sea and try to hang on to the buoy until help arrives.”

When Joe Marra of Lewiston, N.Y., heard the cries of terror, it was already too late to save the captain of the 19-foot fishing vessel that had just been engulfed by a whirlpool in the Devil’s Hole section of the Niagara River. That captain, Steve White, 43, wouldn’t be seen again for six days, as the turbulence and intense subsurface currents of the river held his body under water for almost a week. Marra, a longtime charter captain in the region, was able to reach one of the passengers on the boat and save him before watching Lauren Barsamian, 27, disappear into another whirlpool just before he could reach her. She, too, would be missing for six days, her body finally surfacing just 15 minutes after authorities found White.

“The area of the river where the accident happened is one of the most incredible fisheries in the state,” says Frank Campbell, a longtime guide in the region. This section of the river is below the world-famous falls, which naturally create an intense flow. Add to that three power plants (two on the Canadian side, one on the U.S. side) that suck and pump water to and from this stretch of the Niagara, and anglers can find the current ripping up to 18 mph.

“This is no place for small boats. And anglers need to realize that this water is always changing, so learning how to read the signs of turbulence, current, and undertows will be the only thing keeping you from getting in serious trouble here.”

The bite mark spanned from shoulder to shoulder. Randy Fry, 50, was diving for abalone with a friend in an area just south of Westport, Calif., off Kibesillah Rock, in around 15 feet of water when a great white shark viciously attacked him. His head was completely separated from his torso, creating the most gruesome scene law enforcement officers in the area had ever witnessed. The crimson water created by this 2004 attack is just one reason the region earned its grisly nickname. The Red Triangle accounts for almost 38 percentof all great white attacks on humans in the U.S.

The aquatic boundaries of the triangle stretch approximately 100 miles, from Bodega Bay, north of San Francisco, to Ano Nuevo Island near Santa Cruz, with the corner of the triangle being formed by the Farallon Islands.

Kayak fishermen seem to be bearing the brunt of recent attacks.

A 14-foot shark attacked angler Joey Nocchi in May 2012 just after he had limited out on rockfish near Cambria (technically just outside the triangle).

Three more shark attacks on kayak anglers followed in 2012, with great whites leaving teeth fragments and punctures in the thick plastic hulls and tossing anglers about like rag dolls. Angler Adam Coca was fishing out of a camo ’yak when a great white viciously attacked him in 2010. The shark didn’t just chew on the nose of the boat, but swam in violent circles as it did so. The shark cut through the nylon straps of his sandals and through his wetsuit booties, leaving razor-like cuts down his legs.

“The risk of sinking is the most pressing problem in these shark attacks. Having help nearby can save your life,” he says. “And stay away from the elephant seals. Sharks seek out the seal buffet.”