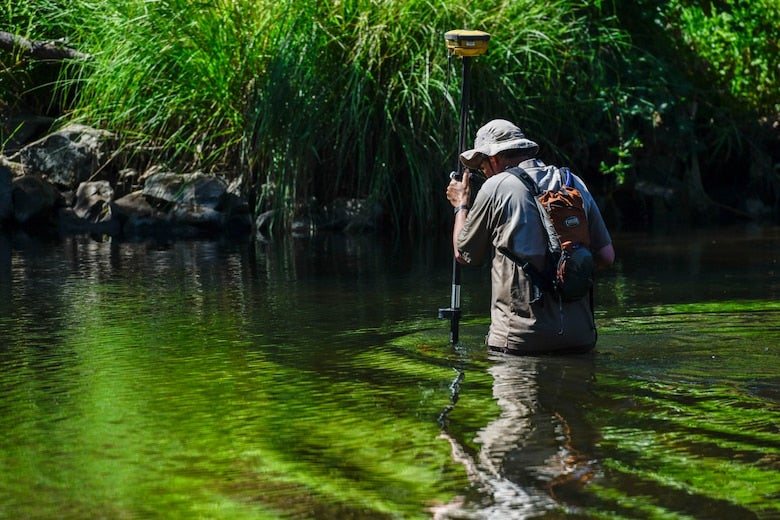 Migratory steelhead and Chinook salmon have access to six more miles of historic spawning sites in a refurbished creek on California’s Beale Air Force Base. All thanks to a unique cooperative effort between the U.S. Fish and Wildlife Service (USFWS) and the Air Force Civil Engineer Center (AFCEC).

Specialists from the two federal agencies removed a dam and completed a stream restoration project on Dry Creek, making it easier for native steelhead trout and Chinook salmon to migrate upstream for spawning in their traditional areas.

“AFCEC initiated a detailed study through a habitat assessment by USFWS fisheries,” said AFCEC’s Kirsten Christopherson, who led the dam removal project. “The study identified that there were two major barriers impeding fish passage – Beale Lake Dam and a low flow crossing that is 7.35 miles downstream from Beale AFB on private land.”

Christopherson said they would like to see the remaining barrier downstream from the base removed, too.

In addition to the dam removal, a rocky ramp was built to aid fish passing over a small natural waterfall upstream of the dam.

“The goal was to raise the water surface elevations and create a jumping pool so fish are able to navigate over the waterfall,” said Jessica Pica, a USFWS engineer who worked on the project. “We played with different slopes and dimensions to get (a ramp) that worked.”

Federal agencies are pursuing funding to pay for off-base Dry Creek restoration, which will ultimately cover over 13 miles of fish habitat.