This search and rescue mission saved an angler's custom rig 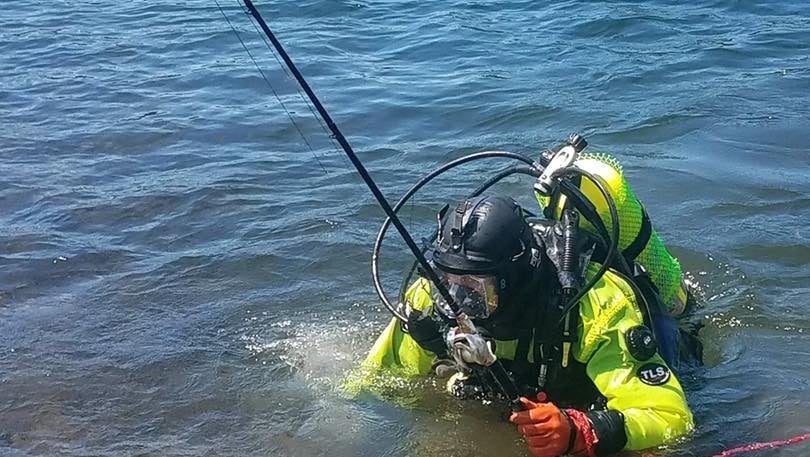 Antony Parnos was fishing in a pond west of Boston on June 30 when he made a tragic mistake. Tossing out a lure, he accidentally hooked a second rod sitting in the boat and he cast that rod out into the water. Then he watched in horror as it sunk to the bottom.

The lost rig wasn’t just an old Zebco. It was an F5 Custom Rod complete with a Shimano Tranx baitcasting reel and a Pizz swimbait. The bait alone cost him $240—which is more than most rod-and-reel combos you’ll find at a big box store. Altogether, the setup was worth around $1,000.

“I tried casting out to see if I could snag it immediately after it hit the water…but the attempt was futile,” Parnos wrote on Facebook. “I watched the setup sink to the bottom and immediately marked a waypoint on my graph.”

He kept casting and dredging bottom, but Parnos was unable to recover the rod that day.

Weeks later, he noticed a local news story about the Cambridge Fire Department. Apparently during a training exercise, the fire department had found a woman’s cherished diamond ring at the bottom of the Charles River. Which gave Parnos an idea.

He immediately reached out to his local fire department in Natick, Massachusetts, and told them the story of his lost rod. For Parnos, the setup was just as valuable as a wedding ring—if not more so (a well-made swimbait will out fish a diamond ring any day of the week.) The fire department told him to try magnet fishing, which he did to no avail.

Then, on Wednesday, he received a Facebook message from the Natick FD. They told him they would be performing a dive training exercise at the same pond where he had lost the rod and reel, and they said they’d try to locate it after the exercise.

Read Next: Texas Game Wardens Help Rescue a Bird Dog from the Bottom of a 50-Foot Well

“I went down to watch the exercise because this kind of stuff interests me,” Parnos told Outdoor Life. “And after they completed their exercise, we went fishing.”

He said they found the rod in less than 30 minutes. The high-dollar reel and swimbait were still attached.

“In speaking with the Chief of the Natick FD, I learned that the scenario I presented was a great training exercise for them,” Parnos said. “Thankfully, the scenario was not a life-or-death one, but it provided them with every other aspect of a real life ‘rescue’: an eyewitness with a point of reference where something went down in a pond.”

Parnos then bought lunch for the crew and thanked them repeatedly for rescuing his precious setup.

“I was in awe watching these guys work,” Parnos said. “These guys don’t get enough credit or support for everything they do to keep our communities safe, and also to help their community members in any way they can. Support and thank your first responders every chance you get!”