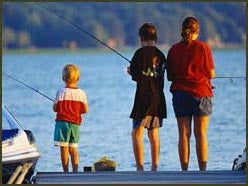 Last May I wrote about the smaller, lighter circle hooks introduced recently for both freshwater and saltwater fishing. Since then I’ve used them extensively with plastic and natural baits and on flies. I’ve also had great input from fishing pals like Captain Jim Ellis and other anglers on their success with the hooks.

The real kicker is that circle hooks are taking fish in situations where we didn’t believe the design would work. And they are saving fish not destined for the table. Why? Because the hooks are not taken deeply and because they are removed so quickly.

In California, a survival improvement of 50 percent for chinook salmon was reported when circle hooks were used. Big-game angler Captain Ron Hamlin, who allows nothing but circles on his boat for bait or fly, has had incredible angler hookup-and-release success on sailfish and marlin. Hamlin was instrumental in launching a big-game fishing tournament that was limited to circle hooks. With new hook models available in sizes suitable for walleyes, trout or panfish, every angler owes it to the sport to give circle hooks a try. And if you’re introducing someone to fishing, there’s yet another reason — circles will help a beginner catch more fish.

Novice fishermen frequently are unsure whether they have a pickup or are snagged. This is especially true when bites are subtle. Their reaction is usually a tentative raising of the rod coupled with a half-hearted twitch. Normally the fish gets off, but not if a circle hook is tied on the end of the line. Simply have your novice crank steadily when he or she feels “something.” If it’s a fish, odds are it’ll be hooked. Then have him raise the rod and crank seriously (unless, of course, line is being taken out against the drag).

In flyfishing, one of Jim Ellis’s problems with less experienced anglers is getting them to strip a fly with any speed. “With circle hooks, the problem is about gone,” he says. “I tell them when they feel something — even when they’re not sure it’s a bite — just to keep stripping at whatever speed they’re using, or just hold onto the fly line and let the fish hook itself, which it will.”

Jim has been using both Daiichi black-nickel-finish circles (packaged as model D82Z) and Eagle Claw L197G light-wire circles (both mainly in size 2/0) with similar results — all good. “My clients have taken more than 500 fish on circles so far this season,” he told me late last summer. “Only one of those fish wasn’t hooked in the lip or corner of its mouth.”

But another guide friend of mine, Tony Stetzko, who also fishes on Cape Cod, has a buddy who had a bad experience using a circle. The hook came around and hit the hooked striper in the eye. The details on this aren’t completely in, and it may have been a single experience.

Other types of hooks used with natural bait frequently cause fatal injuries to fish, usually because the hooks are deeply ingested or they become lodged in a fish’s gills. Switch to circles, though, and you can let a bass, walleye or panfish chomp a crawler, minnow or crayfish and be assured that most of your hookups will be in the mouth corner more than 90 percent of the time.

A growing use for circles is rigging them Banjo Minnow-style with a soft-plastic jerkbait. Use one of the little wire screw-in Hitch Hikers from TTI Companies, screw it into the lure’s nose and insert the hookpoint in the Hiker eye. Remember, no high-sticking, eye-crossing hooksets.

Circle hooks work not as regular hooks by catching on the first irregular mouth surface they contact, but as they are pulled out. A fish must have turned, if ever so slightly, which it normally will have done after taking an offering. T.J. Stallings of TTI offers this demonstration to skeptics: “Tie a circle hook to a piece of line and drop it down an empty cardboard paper towel tube or toilet tissue tube. Angle the tube slightly away as you pull out the hook with the line. Invariably the hook will catch at the edge.” If you pull straight out, of course, the hook won’t catch — but then, the tube can’t close its “mouth” either.

Classic circle-hook designs come on short-shank hooks, which makes them difficult to use for tying streamer flies. The first angler I know to fashion circle hooks from regular hooks is Maine’s Brad Burns. This fanatical flyfisherman began using longnose pliers to bend his favorite Mustad 7766 hooks into modified circle configuration (you want to wear eye protection when you’re doing this; hooks can snap). After mashing down the barb, Brad grabs the hook bend at midpoint with needlenose pliers and, with thumb pressing down on the hook-eye, twists the pliers up until the point is aligned right with the eye. Anglers who want a truer circle design first need to bend the end of the point up toward the shank.

Some hooks are far more brittle than others; even stainless-steel ones are. If you’re breaking too many, Burns suggests applying the pliers near the top of the bend when twisting or switching to a heavier model of hook. Like a manufactured circle, a properly home-bent hook won’t catch on your hand or a piece of paper as you slide it across.

Early in the game I thought surface bugs wouldn’t be as successful on circle hooks. Jim Ellis (508-362-9108; jellis@gis.net) proved that wrong. He’s been tying a version of Boston cab driver Jack Gartside’s famous foam Gurgler on circles and they are marvelous. Jim’s version is a simple buck or hackle tail, a few shank wraps of flashy Estaz and a foam strip on top. These super-easy-casting flies need to be squeezed out occasionally as they absorb water. Bass, pike and muskies take them; so do stripers, blues and an assortment of saltwater species. Sometimes an aggressive fish will push so much water the Gurgler will be moved away. “You’ve got to control yourself,” Ellis coached me. “Don’t pull it away from the fish, just keep stripping. It’s gonna ruin you for trout fishing; you won’t set the hook!”

That might have been true the first time. But you adjust — quickly.