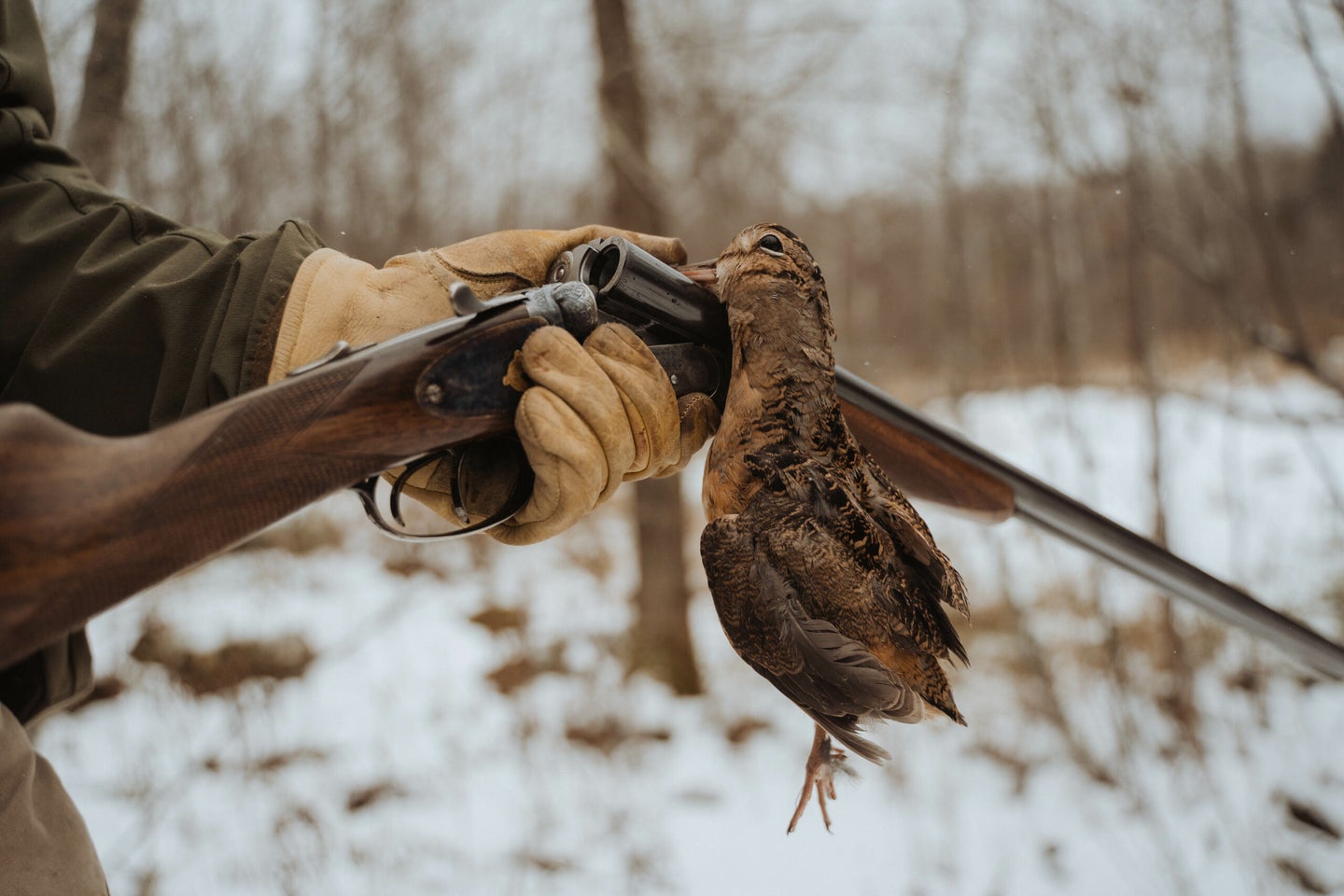 RFM has only brought its side-by-sides to America in the last year. Adam Reiger
SHARE

The dampness of the cellar mixed with the smell of gun oil hit my nose. My eyes caught the fluorescent lights reflecting off blued metal. Well-kept barrels of various brands and models of vintage shotguns stood out in contrast against a worn table. My bank account was about to be sucked dry; I tried not to think about the overdraft fees. The affordable gun I had originally came for fell by the wayside as I shouldered an Italian-built shotgun with a slender English grip. Welcome to the world of side-by-side shotguns.

Until I met my dream shotgun in that cellar, the name Bernardelli was entirely unknown to me. V. Bernardelli closed its doors in 1997, a fact I only learned after researching the Italian manufacturer when an opportunity arose to buy one of their side-by-side shotguns. The truth is that buying used shotguns can be challenging; it’s easy to get burned on the value, plus the advantages of modern side-by-sides become more relevant as our bird hunting culture expands. But if we’re going to understand the resurgence of modern side-by-side shotguns in America, we first must understand their decline.

The Decline of American Side-by-Sides

The story of side-by-side shotguns is one that follows the rise and fall of trends. Even before companies like V. Bernardelli closed their doors, the days of buying now-famous American classics, like Parkers and A.H. Fox guns from hardware store walls at affordable prices, were long gone. Many of the factories shuttered by the late 1940s and the rights of those companies were acquired by larger gun manufacturers that would, for the most part, also cease production.

“It started after World War II with the introduction of semi-automatic guns from various manufacturers,” said Jerry Havel, who spent 20 years working in the shotgun business and is now co-founder of the Upland Gun Company. “These manufacturers were able to mass-produce some great shotguns for the hunting market. This new technology made guns more affordable to the general public, so you saw a rapid growth of the outdoor industry. This left the ‘old guns’ in the corner for years.”

By the 1980s and ’90s, even the modern firearms companies began to drop side-by-sides as their popularity declined. Companies like Stevens ended production of classic models of side-by-sides by the late 1980s. Each one of these defunct guns were representatives of the last “affordable” side-by-sides of a different era. As Gregg Elliot of Project Upland pointed out in the article The Rise of the Over-Under: “Until about a decade ago, new, affordable side-by-sides ceased to be sold in the United States.”

Sure, affordable is a relative term. Even most over/under shotguns that dominated gunstore shelves during most of my younger days were beyond my price range. A Beretta 686 was entirely out of reach at $2,000. Classic side-by-sides were out of the question. After some years, though, my perspective began to change. I’d owned my fair share of affordable over/under shotguns that I eventually traded in, upgraded, or just left behind. My pattern of gun buying went from buying many inexpensive guns to buying fewer, more expensive guns. By consolidating my collection, a whole new world opened up to me.

Vintage shotguns are of course available to those interested in collecting, restoring, and understanding the old classics, but the vintage gun market is intimidating and fraught with risk, which further contributed to the decline in popularity of the side-by-side. But luckily, today there are a handful of modern side-by-side shotgun options that combine quality and functionality.

In the early 2000s, new double guns entered the market and renewed interest in the classic side-by-side design. Generally speaking, these guns are manufactured in Turkey, imported to the U.S., and sold by shotgun companies here.

CZ-USA introduced a very affordable side-by-side, the Bobwhite G2, that carried a price tag under $700. Despite a few failed attempts at this market segment by other companies—notably Franchi’s Highlander that survived for less than a decade due to lack of interest—CZ stuck it out. Today, CZ-USA leads the entry-level side-by-side market. Entry-level guns provide the unique opportunity to fall in love with a side-by-side without a significant financial investment.

“CZ-USA was uniquely positioned with its significant investment in CNC technology to bring a quality side-by-side to market that offered fit and finish not usually available at an entry-level price point—proven true by the CZ Bobwhite G2 quickly becoming the best-selling side-by-side in the United States,” said Zach Hein, Marketing Communications Manager at CZ-USA.

I am still shocked every time I see a CZ Bobwhite G2 on the gun store shelves with its straight English stock and double triggers for an MSRP of only $675. The gun has always treated me well and I would not hesitate to recommend it as a starting point to anyone interested in getting into side-by-side shotguns.

AKUS has white-labeled a series of side-by-side shotguns that include big names like Dickinson Arms, Webley & Scott, and even Kimber. These side-by-sides occupy a big portion of the $2,000-$5,000 market and are certainly worth the price. I’ve had the opportunity to shoot a Dickinson on a few hunts over the years and have always been pleased with its performance.

Seeking to expand the market using direct input from the consumer, Project Upland (which I am the Creative Director for) collaborated with CZ-USA to crowdsource a shotgun design within the upland hunting community. Upon analyzing the data from the project, Jennifer Wapenski, Managing Editor of Hunting Dog Confidential said, “The upland community made it clear that certain features are absolutely essential in the ideal side-by-side shotgun: double triggers, a straight grip, and a splinter fore-end.

“Aesthetically speaking, the color case finish receiver was by far the most popular choice. On those 28-inch barrels, upland hunters prefer a standard flat rib, a classic brass bead, and flush chokes.”

The CZ-USA Project Upland Edition side-by-side comes in at an MSRP of $1,429. It was originally to be showcased at Pheasants Forever Pheasant Fest, but COVID-19 had other plans, and it will become available in the next few months from authorized CZ dealers.

The Side-by-Side Shotgun Revival is On

Those looking to spend more than $1,500 but less than $5,000 were neglected for a long time as most non-Turkish manufacturers either built above the $5,000 mark, like the Beretta Parallelo, or not at all. As interest within the Project Upland community grew around vintage side-by-sides, we began to engage in discussions with manufacturers about filling that gap.

“The market has had plenty of used gun options,” said Havel. “Don’t get me wrong; there are some great used side-by-sides on the market for under $5,000. But the keyword is used. New hunters coming into upland hunting want to make their own memories, their own dents or scratches in the stock. Little nicks maybe on the barrel. They don’t want to inherit someone’s memories; they want their own.”

We spent some time collaborating with AYA on the shotgun that would come to be known as “The Classic.” This Anson and Deeley patent boxlock action shotgun was built on the idea of a simplistic, “American” version of a side-by-side, or essentially a minimalist version of AYA’s No. 4/53.

We even suggested the introduction of CNC-machined parts to reduce the production cost of the gun, but AYA opted to stay true to its hand-built roots. This gun lowered the entry threshold of the bespoke shotgun market by almost $1,000, coming in at an MSRP of $4,200. Although this is an incredible shotgun, the higher price point ultimately made us rethink the original idea of making it the “Project Upland Edition” AYA model. Although many of us aspire to own such fine guns, it doesn’t capture the true essence of our community and our mission of making the uplands accessible to everyone.

Italian Guns Returns to the U.S.

Finally, we’ve arrived at my favorite subject: Italian shotguns. In recent years, the newfound popularity of side-by-sides has made some Italian companies look to the U.S. market once again. This includes names like Fausti, F.A.I.R, Fabarm, and RFM. The recently-released Fabarm Autumn is new to the U.S. market, only available in 20-gauge (I am totally okay with that), and can be configured with either a straight English or pistol grip. Barrel lengths can be 28″ or 30″ but only a single-trigger model is available. The MSRP on this shotgun is $4,095; another $160 can get you a left-handed version which is a great consideration for those who are otherwise excluded from the standard cast of an off-the-shelf side-by-side.

RFM is the Italian-built side-by-side that gets me most excited. RFM is an old company in Italy, but it has been in the states for less than a year. Their entry-level Zeus G1 can be custom-ordered to your measurements in the base version at just $1,999. Start adding bells and whistles to this boxlock and you can drive up the price tag by another couple grand, but that basic coin finish model with a pistol grip, extractors, and fixed chokes is definitely a value.

Jump up to RFM’s Venus at a starting MSRP of $2,899 and you get a dedicated small-gauge frame and straight English stock. One step further to their Mythos M3 and you move into the realm of demi bloc barrels with a starting MSRP of $3,999. All of these represent an interesting concept of bringing “bespoke” shotguns to a more achievable price point for the average hunter.

Rizzini has also begun to bring its side-by-sides to the U.S. market with the BR552 and BR550. Both guns cost around $5,000 (the BR550 is a few hundred dollars cheaper than the BR552). The guns are built on a steel monolithic frame and feature Turkish walnut stocks and 26-line-per-inch checkering. You can buy them in 12-, 16-, 20-, and 28-gauge, plus .410-bore. These boxlock doubles have single-selective triggers and the 552 is a couple pounds lighter (in 12-gauge) than the 550, making it easier to carry afield.

With the sudden influx of side-by-sides under $5,000, one has to wonder who else will bring new guns to the market? This revival marks an exciting time, especially for those less inclined to buy vintage or who are just looking for a modern shotgun. For the most part, the prices of all these guns reflect the quality of the build and the reliability of their performance. With growing interest from the hunting community and increasing competition from gun companies who have finally noticed that the side-by-side market is far from dead, we can hopefully look forward to many years of innovation and competitive pricing to keep quality guns accessible to the average hunter here in the U.S.