When catch-and-release isn't on the menu. 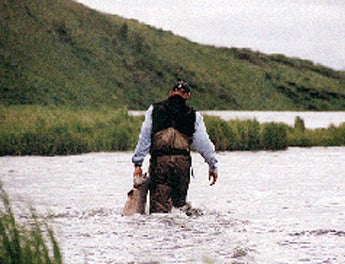 Forget about the cholesterol police. Forget the rabbit food, the healthy grains, the nuts-and-twigs diets foisted on us by enlightened society. I’m talking about indulgence here, downright sinful gnoshing and the time it takes from fishing to do it. By mainstream definition, which describes fishing in terms of staccato casting in weekend tournaments and Twinkies and Cheese Nips scarfed on runs to the next hot spot, the shore lunch is a relic of a bygone age.

Well, not exactly. That pleasurable interlude known as the shore lunch is alive and well on a limited basis in our northern states and is the expected drill on Canadian lakes. Sure, a guide does the chores on outfitted trips, but most anglers I know who rent cabins or who headquarter in drop-off camps up north cook shore lunches as part of their routine.

Having partaken of every imaginable variation on the shore-lunch theme from Labrador to Alaska, I’ve learned a few tricks to make the simple fare involved better than you can believe. The tips apply to do-it-yourself preparation or tweaking a fishing guide’s repertoire. You’re going to want to eat even more!

Get the Fire Going
You don’t need much hardware: a Coleman stove, a really big cast-iron skillet or iron pot and a separate fry pan. Add a pail or pot in which to heat water as well as towels or pot holders and the usual utensils. You’ll also want potatoes, onions, beans, batter (or its makings), coating crumbs, spices and fat-yes, fat. We’re talking serious deep fry here. One time on Ontario’s Eagle Lake, my wife, Judy, who is the health warden in our house, watched in disbelief as guide David Pollard dumped two pounds of lard into his skillet. She rolled her eyes heavenward and demanded to be told why so much grease was necessary to cook the fish considering that only three of us were dining.

“Fillets must float,” answered Pollard. Deep frying is not the same as pan frying (sautÃ©ing), which is done at lower temperature and which can be performed on “dry” fillets. The latter are fish fillets that have been rolled in flour or corn meal after seasoning, then placed into a pan/skillet in which some butter has been heated to foaming. Deep frying is accurately named; you must use a cooking vessel deep enough so that there’s at least an inch of fat or oil over the fillets when they’re submerged. And whether you use lard or peanut oil, it’s got to be a very hot 360 to 390 degrees (bubbling is fine). The hot cooking medium instantly seals the batter around the fillets, preventing them from absorbing fat. When they are done, they’ll float.

Place them on absorbent paper a moment, then serve. If you were to use batter at the lower temperature typical of shallow pan frying, the fish would absorb the liquid and the result would be a leathery mess.

Batter Up
There are many batter recipes. A simple one you can count on begins by mixing one egg, some canned evaporated milk and a little beer to thick-runny consistency. In a separate container or plastic bag, blend some bread crumbs, corn meal and spices of your choice. If you like, you can add a little flour to the dry mix. Dip the fillets in the liquid, then the dry mix until they’re well-coated. Drop them into the hot fat, turn them after a moment and then wait for them to float. The batter and the fillets should be very cold. With that in mind, catch the lunch fish early and bed them on ice soon afterward. I either pre-mix the milk and egg, keeping the mixture in a sealed container on cooler ice along with the beer to be added, or simply keep all the ingredients on ice.

A simple Japanese tempura recipe also makes for a great shore lunch fry. Mix one egg, a half-cup of ice water and three-quarters of a cup of self-rising flour (flour with baking soda and baking powder added) until the ingredients are blended but the batter is still lumpy. Forget bread crumbs or corn meeal. Keep this batter in a container on ice in the cooler until you’re ready and pop it back in occasionally as you cook. This recipe produces a puffy golden crust around the fish.

Here’s a typical drill for the rest of a shore lunch. Fry up onions and potatoes. Put a couple of cans of baked beans in a pot or pail of water on the heat to warm. When the fish are done serve everything immediately. Save the water in which you heated the bean cans for dishwashing chores.