A new spin on the dynamics of gossamer angling. 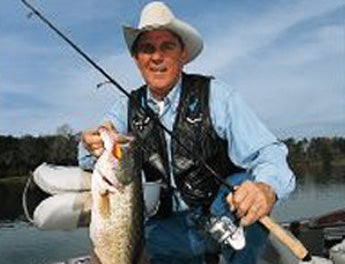 Let’s clear up some confusion over terms. Every once in a while there’s a little flurry over what’s called “ultralight” tackle. The usual outfit consists of a noodle-like rod, a micro reel and lures of 1/16 ounce or lighter. Stream trout and panfish are the usual target species.

Outdoor Life, in this column and elsewhere, has regularly covered the deadly effectiveness of mini-lures, but the soft rods and downsized reels marketed under the ultralight banner always left something to be desired. This was especially true when folks tried to use them with larger baits on big fish. That’s how ultralight got a bad rap. General-purpose light spinning tackle is widely accepted, though. For walleyes and smallmouth bass, that typically means an 8-pound-test outfit. An 8-pound outfit is considered minimum for largemouth bass finesse techniques, and many anglers would be happier with 10-pound-test.

How about changing the rules? How about bringing in a whole new class of light tackle that can cast and fish everything except the big bass baits, yet incorporates, say, 4-pound-test line that really breaks at 4 pounds of pressure? Yes, and use the tackle on largemouths, too. What is that snickering sound I hear?

Don’t blame me, this is Ray’s idea. You remember Ray Scott, the father of modern bass fishing. Yeah, that Ray, whose mantra of “play the fish in the boat, not in the water” and wildly successful tournament circuits ultimately produced the most efficient bass fishing methods we have today. Several generations of fishermen have now come along schooled in tackle and techniques that present artificial baits to bass in their inner sanctums and derrick them right out of there if they bite. So who’s to argue with efficiency?

**Adding Excitement **
For one thing, not every fisherman is a tournament guy for whom one lost fish means the difference between a paycheck and none. Also, compare fighting, say, a 5- or 6-pound largemouth on line that’s 4-pound-test honest-to-gosh actual breaking strength to hauling one in on hawserlike 20-pound-test mono or braided line. You’re talking sweaty-palms vs. ski-’em-over-the-weeds scenarios, adrenaline rushes vs. mechanical mastery.

And don’t forget the effectiveness of lighter gear. It’s discussed less in bass circles because no one likes to talk about the growing difficulty recreational anglers have catching fish in heavily pressured waters. Light gear can be a decided advantage here, both from the standpoint of lower line visibility and, more important, better lure action and quicker depth penetration.

All reasons, plus more, why Ray Scott has a new mission. He partially bills it as putting the sport back into fishing. Scott likes to hit you with the fact that in the 2002 BASS Masters Classic the average fish caught weighed 1 pound 12 ounces. That on standard bass tackle, some of which included 20-pound-test rigs. “How much more exciting tournaments and weigh-ins would be,” says Papa Bass, “if the pros had to fish with four-pound-test line.” Doesn’t that open a can of worms?

The tournament scene is one thing. For recreational fishing, practical light tackle raises the challenge bar a few notches and offers increased action. Says bass fishing kingpin Roland Martin, “I’m not ready to use four-pound-test line in tournaments, but you’ll definitely get more serious strikes with it where fishing pressure is heavy.”

A Rod for the Job
Fun, excitement, more hookups-enough reasoning why; what we need to consider now is what makes a practical light rod and reel that will protect 4-pound-test line, cast the proper lures, and also handle the fish. Many of the rods walleye anglers use for 6- to 8-pound-test line are close, as are some of the spin sticks popular for the lightest tubes and finesse baits. You want light weight, a fast tip to cushion the line and a powerful butt section. Length is a al consideration because you’ll be dealing with the greater stretch of light line. You’ll need to compensate for line stretch when setting hooks and working lures in deep, open water. I’d opt for 7-foot rod length-61/2-foot, minimum.

Reels have been a problem. Anglers who tried so-called “ultralight” reels to keep weight down found the small spools encouraged line memory and kinking. They also translated into low retrieve ratios. Gearing was often not up to the job. Drags are critical for this fishing, and because most are wanting, many light-tackle anglers have resorted to flipping the anti-reverse switch off and back-reeling when fish surge or run. Don’t try this on saltwater species. Serious bass anglers who fish relatively light, 8-pound-test line often choose a spinning reel that’s larger than seems appropriate for their rod simply to counteract these problems.

Once he’s focused on a new project you can count on Ray Scott to run with it, slaloming through all obstacles. Not quite satisfied with existing rods for his mission, he had his own rods, called Sportackles, built. Their fast tips, gradual tapers and strong butts allow casting lures as light as 1/16-ounce on 4-pound-test. They have Tennessee handles, meaning you tape your reel onto the cork. The butt line guide is dime-size to avoid line slap- a trick learned from a tournament caster-with the other ultralight guides quickly dropping in size to the micro tip-top. Sportackle rods come in one-piece, 61/2- and 7-foot lengths; two-piece models are being considered. The 61/2-footer weighs a scant 2 ounces, the 7-footer just a tad more. Having cast and fished both I can say they are excellent for their intended jobs.

While Scott was searching for a reel that would solve all the old problems of light tackle, a homebuilder and dedicated fisherman walked up to him at a St. Louis sport show. Fred Kemp had built a prototype reel scavenged from parts of existing models and wanted Scott to see it. The reel’s most intriguing design element was its large spool and small body. Scott encouraged Kemp to fine-tune his design, and what evolved is the SuperCaster 225, a reel that can easily handle lines from 2- to 15-pound-test.

**A Reel Jewel **
The reel’s features make it ideal for an extremely wide variety of fishing techniques. Its 21/4-inch spool dwarfs the average 11/2-inch spool on reels in its class. Feathering a cast with your forefinger is a breeze because the spool is so close. The body is of light aircraft-grade carbon fiber, stronger than standard graphite and some metals. Gearing is of bronze alloy and stainless steel, engineered very much like the popular Cardinal reels of yesteryear. The shaft is a stainless steel alloy said to take more than twice the punishment of ordinary steel shafts.

Because of the spool’s high capacity you’ll probably want to use an arbor with light line. The SuperCaster weighs 8.6 ounces with its aluminum spool, 8 ounces with the carbon spool. During my fishing with a pre-production model, the SuperCaster performed sweetly. The drag was smooth, though no extended runs were experienced. The large spool and even line lay resulted in excellent cast distance. With its tough gearing and eight ball bearings, the reel should easily handle heavy assignments with its recommended maximum 15-pound-test line.

Some worry that light tackle will wear fish down to the point of non- recovery. The kind of tackle discussed here won’t do that. Our popular freshwater species aren’t subject to muscle lactic acid buildup, as are tuna, for example. Bass, especially, are not built for long-run fights.

You can’t crank a fish across the surface and sail it into the boat using 4-pound-test line. But this light tackle enables you to bring that fish to hand nearly as fast and with less banging around. You need to experiment with such outfits using line tied to a scale to get a feel for how much pressure you can apply. It will startle you.

Fishing for walleyes, bass and pike around cover or structure on light tackle isn’t like fighting big saltwater fish in open water. This sport will cause you to develop entirely new strategies. As Davy Hite, 1999 BASS Masters Classic champ, says, “You don’t just throw where the bass lives. You knock on the front door and invite him out to play.”

If more hookups, a new level of challenge and sheer excitement pique your interest, you’re a prime candidate for the light-tackle game. a feel for how much pressure you can apply. It will startle you.

Fishing for walleyes, bass and pike around cover or structure on light tackle isn’t like fighting big saltwater fish in open water. This sport will cause you to develop entirely new strategies. As Davy Hite, 1999 BASS Masters Classic champ, says, “You don’t just throw where the bass lives. You knock on the front door and invite him out to play.”

If more hookups, a new level of challenge and sheer excitement pique your interest, you’re a prime candidate for the light-tackle game.