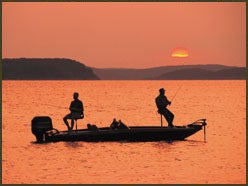 Bass anglers want dazzle. At least that’s what the sparkling array of tricky new lures-the veritable junior laser light shows that inhabit every fisherman’s tackle box-would seem to suggest. But there are exceptions. In the bass-fishing style of Mark Davis and Craig Davidson, there is no flash-only function.

When Craig and Mark (no relation to Mark Davis the touring pro) were kids, buzzing Mepps spinners for smallmouths in the rich farmland creeks around Lebanon, Ind., was the way everyone fished. But when high, cold water arrived each spring, the bass weren’t inclined to chase down lures, even Mepps spinners. So Craig and Mark took the next logical step, which was to try the real thing. The two began seining live minnows, and, not surprisingly, they caught bass when other anglers were getting blanked.

In the spring, live minnows would find big smallies for the two anglers in the mouths of tiny tributaries and irrigation outflows. Sometimes these tribs were only two feet wide, but their water was often warm enough to attract forage. Lively bait-fishing taught the young anglers something else: They had been walking where they should have been fishing. The springtime smallies, they found, would hang in slow current and slack water close to shore, especially in places where the main channel would veer close enough to form an easy retreat option for the fish. Even the smallest of cuts and irregularities along these shores deflected enough current to hold fish. And scallops in the banks, they found, generated eddies, frequently reversing the current so that bass would face downriver.

The downstream sides of gravel points and bars are also great places to swim minnows, as are the down-current sides of mid-river islands. Usually a lip and a drop-off are present where the river rejoins below an island. Fish the rocks and gravel above and over that lip, and also the troubled, swirling water just downstream. Sand/gravel flats on inside bends are also worth a try-anything with an irregular, rocky strata or sand/gravel mix.

Although a rocky, uneven bottom is great smallmouth habitat, it makes seining bait tricky. These days Mark and Craig use a four-foot cast net. The mesh is 3/8-inch, so small minnows can escape while “golden suckers,” the hardy bait of choice around Lebanon, are snared.

Rigging and Circle Hooks
Rigging minnows is pretty basic stuff, though dependent on the activity levels of the fish. When smallies are not aggressive, use only enough fixed shot to get the minnow to the bottom, and attach it no more than a foot from the hook. This arrangement prevents the bait from swimming too far and allows you to fish precise targets. If you’re working the water column from top to bottom, however, or exploring more extensive holding areas, attach the weight 18 inches from the hook or use a standard bent-up “walking” slip sinker.

Mark and Craig fix floats above their minnows when they’re casting the bait to a far bank, running it down a current seam or along shore. That way, when the line begins to belly they can flip the rod high and actually mend the line to keep the float on track. You can’t do that without a float, nor can you do it well with a short rod. I like a 7- to 71/2-foot spinning rod for this type of fishing, one with a soft tip that won’t tear off the minnow on the cast, but one with authority in the butt section. Long rods also keep more line off the water, cast light bait farther and make a simple chore out of flipping bait just like you would a jig.

Fishing natural baits of any kind has always resulted in extremely high fish mortality. However, that’s no longer an inevitable truth given the recent introduction of freshwater-size circle hooks. Ironically, circle hooks (see Private Lessons, May 1998) have been the weapons of longline commercial fishermen who have helped deplete many fish stocks. Now the uniqque design is poised to become one of the strongest tools for conservation.

But don’t just take my word for it. Larry Dahlberg, host of The Hunt for Big Fish on ESPN Outdoors, has this to say about the new hooks: “In catching approximately three dozen smallmouths on each of three outings, I’ve had 100 percent lip-hooked bass. I let them eat a night crawler right down into their bellies, give them line, let them stop and park. When I reel up, every fish is lip-hooked.”

The key to using circle hooks is ignoring the instinct to strike quickly, says OL Contributing Editor and largemouth bass expert Doug Hannon. “Just tighten up the line,” says the Bass Professor. “The hook will begin to pull out and, when the eye clears the mouth, the hook gap catches the corner or lip, the hook rotates and the mouth is forced between the point and bend-slowly and deliberately.”

“Circle hooks are one of the most important breakthroughs-in terms of conservation-in my lifetime,” says Dahlberg. “Wouldn’t it be great if they were mandated right now in fisheries that are being hammered by poor bait-fishing practices?”