Fish behavior, summer tactics and the hottest tackle. Now you have all the information you need to know in one handy playbook. 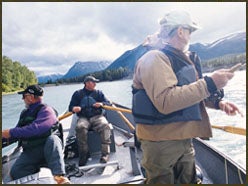 Walleye fishermen have more weapons at their disposal than ever before. Chart-plotting electronics, species-specific boats, “superlines,” featherweight rods and computerized lure designs are rapidly becoming standard gear. Plus, there’s better access to fishing information these days: You can read about tournament breakthroughs in fishing magazines, see them demonstrated on television and even download them off many sites on the Internet.

The latest technology, however, is no substitute for fishing knowledge. Success on the water begins with a solid understanding of walleye behavior. Then you need to familiarize yourself with walleye holding patterns for the type of water you’re fishing and find a presentation that suits the structure and cover, the time of year, the weather and the mood of the fish. In short, you need an action plan. Within the following pages, you’ll find the building blocks for creating a solid midsummer strategy.

WALLEYE BASICS
The first step to cinsistent walleye-fishing success is understanding the quarry. here’s a quick rundown of the most important aspects of walleye biology:

HABITAT
Walleyes thrive in large natural and man-made lakes and big warm-water rivers, but they can also indabit a variety of smaller lakes and streams. They’re usually found along a clean, firm bottom, but contrary to popular belief, they do not require clear water. In fact, walleyes reach their greatest abundance in waters of low to moderate clarity.

Considered “cool-water fish” by biologists, walleyes prefer water temperatures in the 65- to 75-degree range. They remain active at nearly freezing temperatures, however, and are a popular target of icefishermen.

FEEDING BEHAVIOR
The walleyes’ diet consists mainly of small fish, such as yellow perch, ciscoes, shad and shiners. But they also eat aquatic insects, various worms and leeches, crayfish, frogs and immature salamanders. In low-clarity waters, walleyes feed early and late in the day or at night.

SPAWNING HABITS
Walleyes spawn in spring, usually when water temperatures reach the upper 40s. They deposit their eggs along shallow gravel/rubble shorelines exposed to the wind, where wave action keeps the eggs well-oxygenated and prevents them from getting covered by silt. Walleyes are random spawners; they do not guard their eggs or fry.

AGE & GROWTH
Walleyes generally frow more slowly in the North than in the South. A southen walleye normally reaches a weight of three pounds in only four years; a northern walleye may take eight years to reach the same weight. In some northern waters with exceptional forage crops, however the growth rate approaches that in the South.

Northern walleyes have a considerably longer life span than those in the South. They commonly reach an age of 10 and have been known to live for more than 25 years. In the South, walleyes more than eight years old are unusual, Female walleyes usually grow much faster and rech considerably larger sizes than males.

THE SUMMER PEAK
No matter where you do your walleye fishing, the early summer offers some of the year’s fastest action as well as a chance to catch the biggest fish a specific body of water holds.

The “summer peak” begins once female walleyes-the larger of the two sexes-have recuperated from spawning and begin feeding heavily to regain body weight. As a rule of thumb, this feeding binge gets under way about six weeks after spawning is completed.

At this time, when the walleyes’ need for food is at its greatest, the supply of food is at its annual low: The baitfish that hatched in spring a not yet large enough to interest the walleyes, and most of the baitfish from the previous year have already been eaten. As a result, walleyes spend a lot of time looking for food, and that spells good fishing.

As summer wears on, young-of-the-year baitfish grow to an edible size and walleyes suddenly have a near-inexhaustible food supply. They no longer must spend much of the day in search of food-they can eat their fill in minutes. Fishing slows dramatically and usually stays slow until fall, when predation has again thinned the baitfish crop.

Serious walleye anglers should know when the summer peak begins in their favorite lake, reservoir or river. The map shown below gives you a general idea of when the feeding binge begins in your area. Keep in mind that the peak may occur a week or two earlier in a shallow body of water and a week or two later in a deep one.

TOP LIVE-BAIT RIGS
Judging by what you see on TV fishing shows these days, you’d think that all walleyes are caught on artificials. But if you checked the boats of the top walleye pros, you’d find a couple of bait buckets stashed somewhere. When the going gets tough, leeches, night crawlers and minnows will outproduce artificials by a wide margin…if they’re rigged properly. Here are some of the most productive setups and hooking methods.

Standard Slip-Rig
Thread onto the line a 1Ú4- to 1Ú2-ounce walking sinker, tie on a small barrel swivel and then add a 3- to 6-foot leader of 4- to 6-pound-test mono with a size 4 to 6 short-shank bait hook. For weedy cover, substitute a bullet or cone sinker.

Rock Rig
Tie a slip-rig, but use a 12-inch mono dropper (with a swivel on one end and split shot on the other) in place of the sinker. When this setup gets snagged, the shot pulls off the dropper, saving the rest of the rig. For more weight, use a pencil-lead sinker.

Slip-Bobber Rig
Tie a slip-bobber knot, thread on a small bead and the bobber, pinch on enough split shot to balance the bobber and then add a size 4 to 6 short-shank bait hook. Set the knot at the desired fishing depth. For night-fishing, use a glow-in-the-dark bobber.

Leeches
For trolling or drifting, hook a leech ahead of the sucker; for slip-bobber fishing, through the middle.