A hands-on system to help you detect -and catch- light-biting winter bass. 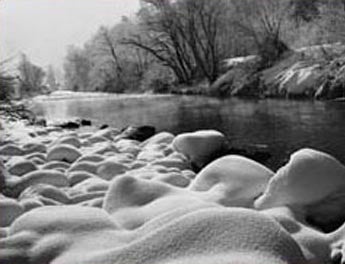 One reason winter is such a tough time to catch bass is that colder water slows the fish’s metabolism. Bass just don’t feed as often, and they tend to want smaller bites when they do get hungry.

Beyond that, winter fish of any type don’t go after bait or a lure with the same voracious behavior they exhibit at other times. Those arm-jarring strikes of summer are just pleasant memories. A lot of anglers fail to hook fish in cold weather simply because they don’t know when they’re getting a bite. That’s why winter is prime time for finesse approaches such as drop-shotting. Another productive approach is what I call “tactile fishing.” I depend more on my sense of touch than on any of my other skills.

A Whisper of a Strike
I didn’t invent this approach. It was taught to me over the course of four score years of fishing by various anglers. Among them was a Kentucky tobacco grower, Billy Burns, who provided one of my first lessons. Billy used to outfish me by about five bass to one on most trips, so one day I decided to pay more attention to what he was doing. He used a jig-and-pig combination composed of a quarter-ounce leadhead jig and a pork-rind trailer.

Once Billy cast out the jig-and-pig and let it settle, he worked the lure back with short, soft lifts of his rod tip. And he worked it very slowly-nothing revolutionary there. What was different was that Billy held the fishing line between the thumb and forefinger of his rod hand, which was positioned ahead of the bait-casting reel. He was intent on feeling whatever the lure touched as it crawled along the bottom. I asked him what he felt. “Everything,” he said.

“Sometimes when a bass in-hales a jig, there’s just a slightly different feel and that’s all,” said Billy. “There might be a momentary sharp tug, but it might be just a slight tightening of the line, or a slackening of the line when the bass sucks the jig in. Whatever it is, I set the hook immediately.”

To detect such minute changes, Billy focused completely on the line and the lure. He didn’t talk, and he didn’t really listen when others were talking to him. I don’t know which was more important to his technique-touch or mental concentration-but I do know that when Billy combined the two, he was a formidable angler.

[pagebreak] Set the Hook Now
Glenn Lau, a noted Florida filmmaker and my longtime fishing buddy, has the same sort of focus when he goes after lethargic bass. Glenn favors spinning tackle with light line. Instead of just casting out a lure and reeling it back in, he employs a retrieve that is reminiscent of a flyfisherman slowly “hand-crawling” a streamer across the bottom. Glenn holds the line flat across his fingers and maintains some tension with his thumb to feel the lure, which usually is a small soft-plastic offering.

Glenn also believes in setting the hook the instant a bass has taken the lure. After viewing his underwater films, I’m convinced that bass can inhale a lure and spit it out before the angler even knows a fish is there.

“A bass will take a worm completely in its mouth, hold it for about two seconds and then expel it if it doesn’t taste right,” says Glenn. “Set the hook as soon as you think you feel it.”

Glenn uses braided Spiderwire on his spinning reel. Although it has a diameter equivalent to about 8-pound-test, it’s 30-pound-test line. Better yet, you can feel a gnat landing on it. The same goes for fluorocarbon line, which is also known for its sensitivity. As a general rule, the less a line stretches, the more sensitive it is.

In terms of lures, jigs will work, but Glenn’s picks are either soft-plastic jerkbaits or “trick worms,” as the lifelike plastic phonies are known. In summer, jigs or 4-inch Yamamoto Senkos are good choices. Glenn rigs a Senko wacky-style; that is, with a 1/0 to 4/0 hook buried through its middle so the worm drapes over it. Water depth determines hook size. The bigger the hook, the faster it will sink. Glenn will cast out, let the worm sink and settle for about a minute and then very slowly retrieve it at a snail’s pace across the bottom.

Winter Rigging
When the weather is particularly cold, Glenn relies on a soft jerkbait that emulates a stunned baitfish, or a Zoom trick worm in a dark color. He rigs either bait unweighted, with the hook buried in the head, and casts it to the outside edges of weed lines. Bass often move into weeds when a sudden cold snap comes along or migrate to offshore drop-offs. Here again, the weight of the hook is more critical than its size. A bigger hook will sink the bait faster, and when you’re fishing deeper water, that’s important.

When you go after bass this winter, give tactile fishing a try. Learn to fish by touch and consider switching to more sensitive lines and tackle. Rods that feature blank-through handle design are a good start. Most important, slow your approach and let your fingers tell you when you’ve got a strike. You can catch fish even in the coldest weather, once you get the feel for it.

** Deep Jigs for Winter Bass**
Terminator made its name as a producer of titanium spinnerbaits, but lately the Oklahoma-based company has been branching out into other types of lures. Its new Football Jig, in ½- and Ã’Â¾-ounce sizes, looks like a winner for deepwater winter anglers. The new jig is available in six colors and features a razor-sharp Mustad Ultra Point hook that will penetrate well even when you’re fishing light line in deep water. (About $3; 800-944-4766; terminatorlures.com)