Float a Fly for a Bass

The float 'n' fly system can heat up your fishing in cold weather. 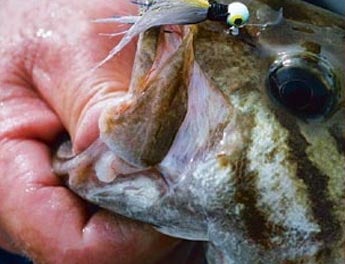 Every so often a bass-fishing technique comes along that’s disarming in its simplicity, yet absolutely deadly when properly executed. Such is the case with the float ‘n’ fly, the most innovative method for catching bass in clear, cold water to surface in years. While it’s especially potent on smallmouths, it will catch largemouth and spotted bass as well. And because it works better than any system in hyper-chilled water, it will extend your bass-fishing season by weeks, if not months. Don’t hang up your rods and put your bass boat in winter storage until you read what follows.

Solution for Suspenders
The float ‘n’ fly system was developed by eastern Tennessee angler Charlie Nuckols as a method of teasing sluggish smallmouth bass to bite in clear, frigid water. Nuckols, owner of Bullet Lures, knew that once the water temperature dipped below 45 degrees in winter, the bass in his local reservoirs became so lethargic they were virtually impossible to catch. Nuckols could see fish on his graph. He just couldn’t catch them by conventional means. The bass suspended in the water off rock bluffs or deep points. He tried to catch them on a jigging spoon, but even this old winter standby would falter once the water temperature dropped into the low 40s. Sometimes the bass wouldn’t budge regardless of what the angler did to elicit a response.

Nuckols suspected that the answer to the slow-bite riddle would be a small lure fished for extended periods at the depth at which the smallmouths suspended. Instead of trying to trigger reaction strikes, Nuckols decided a soft sell was better. He started experimenting with tiny crappie jigs dangled under a bobber and soon began catching bass. The more he refined the concept, the more fish he caught, until he eventually arrived at what many bronzeback aficionados feel is the ultimate system for big smallmouths in cold, clear water: the float ‘n’ fly.

Charlie Nuckols drowned in a boating accident in 1996, just as his revolutionary bass system was gaining a following among smallmouth anglers. Today, Charlie’s brother Eddie runs Bullet Lures, which remains the main source for the specialized lures and equipment used with the float ‘n’ fly system

. How it Works
One reason for the float ‘n’ fly’s popularity, beyond its effectiveness, is its simplicity. The float ‘n’ fly system consists of three basic components:

1. A tiny leadhead jig, or “fly,” tied with craft hair (a crinkly man-made material frequently used in the toy industry). When suspended beneath a bobber in clear water, a craft- hair jig will puff out, or “breathe.”

Consequently, the small jig (usually 1/16 ounce and 2 inches long) resembles one of the diminutive lake minnows that suspending bass feed on in winter.

2. A small (Ã‚Â¾- to 1-inch) plastic bobber. Float ‘n’ fly fanatics insist on a stationary float as opposed to a slip bobber. The float is clipped onto the line from 8 to 13 feet above the fly. The float bobs on the surface and keeps the jig suspended at the desired depth. It’s simple, but effective.

Anglers proficient with the system use two-piece rods 8 to 11 feet long. The rod should have a super-soft action, almost like a flyrod, to cast the lightweight jig and float long distances and to provide the shock absorption needed to prevent huge bass from popping light line. This rod is paired with a spinning reel loaded with small-diameter 4- or 6-pound-test monofilament line.

The Big Chill
The float ‘n’ fly method is most effective in clear water with a temperature between 38 and 48 degrees. It absolutely shines when the water is in the low 40-degree range-a period when many reservoir smallmouth anglers have traditionally hung up their rods. “I got two big surprises when I first began using the float ‘n’ fly in midwinnter,” Tennessee bass guide Jim Duckworth says. “I was amazed at the sheer number of fish I caught. And I was stunned by the fact that even larger bass will go after those small jigs. Four-pound smallmouths are common with this method.”

When the water is extremely cold, suspending bass are in a totally neutral mood, Duckworth explains. “Their metabolism is cranked down so low and their digestion process so sluggish, they don’t feed very often. But they will strike a tiny lure dangled right in their faces.”

Where to Fish
The float ‘n’ fly works wherever smallmouths suspend in winter. High- percentage spots include:

Once the depth of the fish has been determined, peel sufficient line off the reel and position the bobber so the fly will be presented at the bass’s depth, or slightly above them.

Next, cast the rig to your target. “I like to either work the rig back to the boat with short twitches of the rod tip, or, if the water is choppy, just let it set there and let the wave action activate the bobber and fly,” Duckworth says. “Slower is better because bass are likely to be sluggish and won’t chase a fly.” As with most fishing techniques, the float ‘n’ fly method works better at some times than at others. “On windy, overcast days, smallies tend to suspend shallower and are highly susceptible to this technique,” Duckworth notes. “The bite often gets tougher when the sun comes out and fish go deeper; that’s when it’s better to target shady bluffs or windy banks. Dead-calm, sunny days also are bad; try setting the float as high above the fly as you can cast it, or look for dingy water where the fish are likely to be shallower.”

A major part of the fun of using the float ‘n’ fly system is that it might take five minutes to land a lunker on that soft-action rod and wispy line. But then, what else do you have to do on a cold winter day?