This UPS Driver Helps Herring Spawn by Scooping them Over Dams

One samaritan’s fight to help save a fish species 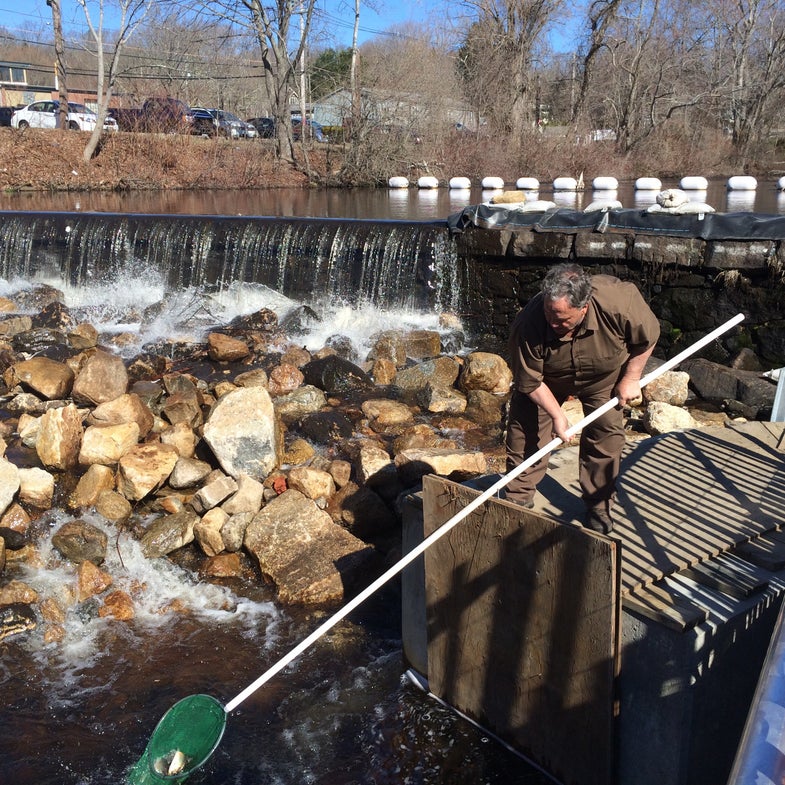 Each April and May, thousands of sea-run herring push up the Saugatucket River, a freshwater stream that winds through southern Rhode Island before emptying in the saltwater estuary known as Point Judith Pond.

They are a beleaguered lot—a mix of alewives and blueback herring forming a run of oceanic survivors that have endured multiple obstacles and threats. Known as river herring, the two species—each with a shad-like body typically 10 to 15 inches long—have historically suffered from overfishing and spawning-habitat decline, and exist at a fraction of their former abundance. Like Atlantic salmon, they cannot be restored by reducing fishing pressure alone: The region’s dams, often legacies of long-defunct mills, prevent would-be runs from reaching spawning grounds.

For going on six years, however, the Saugatucket’s spring herring have been luckier than most.

A short distance from where fish enter the river, they encounter their first dam, at an aging mill complex in Wakefield, R.I. The dam is roughly the height of a man. Here, on any given day, the herring are likely to meet Bill McWha, a man who has made it his mission to help them—by literally giving them a lift.

One spring day in 2010, McWha, a tractor-trailer driver for UPS, happened to be in Wakefield after a pulse of migrating herring had stopped at the dam. The fish were packed in a dense, frustrated school, unable to continue. “I could see they were stuck,” he says.

The dam had been modified with a fish ladder intended to allow sea-run species passage upstream. But McWha noticed it was poorly placed, with its sole entrance downstream of the dam’s face. The herring had swum past it, encountered the barrier, and were blocked.

He bought a long-handled dip net, returned to the Saugatucket, and began to scoop up herring and lift them over the barrier.

It seems a calling was born. It soon would make McWha a streamside fixture in the springtime. River herring are protected. Fishing for them in the Sauguatucket or any other Rhode Island waterway is forbidden. But McWha obtained permission from the state to help the herring by using fishing equipment—a net—to carry them over the dam. Soon he had bought several nets, extended their handles with 10-foot sections of PVC pipe, and attracted volunteers, which now number in the dozens.

Ahead of the 2015 run, the old fish ladder was modified while a new ladder was built. Many herring made it through without a lift, meaning there are not apples-to-apples numbers for that run’s size. But to McWha, the volume seemed down. He thinks open-ocean fishing by seiners and trawlers is the reason. “They get hammered out front,” he says.

Even with improved access to spawning grounds, the fish face threats, and understanding all the factors affecting stock health proves elusive.

For McWha, now 65 and a lifelong admirer of anadromous fish, helping herring has proved to be deeply satisfying. He understood that their depleted numbers mark not just the loss of something spectacular—healthy runs of sea-run fish bounding upstream to herald the arrival of spring and the health of a watershed. Herring are also important to the ecosystem’s grand web, providing forage to marine mammals, birds, and freshwater and saltwater fish, including the striped bass that congregate in spring at the watersheds to feed on post-spawn herring returning to the sea, and again in fall to feed on young herring heading offshore.

His commitment is especially remarkable considering that McWha himself does not fish. In early 2015, he could be seen at Main Street Dam, and upstream at two other smaller dams that the fish are able to pass, marshaling his charges upstream. One afternoon, I found him thigh-deep in the water herding fish toward Indian Lake, where they spawn.

“You can call us the Saugatucket River Herring Association,” he says, and chuckles. Asked if he has just made up the name, he allows himself a fuller laugh. “Yeah,” he says. “Yeah, I did.”

This year, he hopes, will bring more fish. He knows it will bring one less obstacle. A new ladder has been constructed, supervised by fishery managers who are confident the dam in Wakefield will not block the run anymore. “I have all the faith in the world that it is going to work,” he says. “This spring we should be able to stand out there and simply count.”