Equipped with Yamaha's super-quiet and very fuel-stingy 225 four-stroke, the 21 MSX presents a package many should admire. 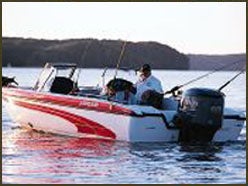 JAVELIN V180C
Equipped with Yamaha’s super-quiet and very fuel-stingy 225 four-stroke, the 21 MSX presents a package many high-end buyers should admire for the range and the speed the rig offers.

Topping out at 58.7 mph on our GPS, the boat will run near the front of any walleye tour-a switch to a three-blade prop might put you over a mile a minute. The hole shot was somewhat less impressive despite the four-blade, averaging about 4.5 seconds, but it should be noted that the 50-gallon tank was full. The “add-on” aluminum casting deck aft is a unique feature; it makes a bass-boat-sized rear deck, complete with swivel seat base, for those days when you plan to cast to the walleyes rather than troll for them.

The boat comes with four movable swivel seats (most competitors offer three). Steering with the Sea Star hydraulic system is effortless despite the speeds, with no tendency to chine-walk, and tight emergency turns are no problem even with the motor trimmed high. The standard convertible top is unique because it folds into an upright “radar arch” effect when not in use so there are no obstructions at the transom as is the case with conventional fold-downs.

MIRROCRAFT AGGRESSOR 175
The Mirrocraft 175 was the lightest boat in our test and delivered impressive hole shots with the 125 carbureted Merc despite a stock aluminum propeller. The version we ran was aimed at value shoppers and had a bit less “candy” than some-the base price doesn’t include a trolling motor, for example, and there are no locks on the rod boxes. However, the boat has some nice touches: The console is made of fiberglass rather than molded plastic and the seats are covered with three-tone vinyl with the company logo inlaid in gold thread.

The main floor is aluminum rather than plywood, an advantage if your boat must be stored outside where the wood might be subject to rot. The test rig was a single console, but the same hull is also available as a tiller version or with a walk-through windshield. The baitwells are lighted and include lift-out minnow buckets. One thing we’d change is the toggle-switch aerator controls; they’re small and delicate and positioned where they’re likely to get broken. A rocker-type switch would be less subject to breakage.

Mirrocraft equips its boats with extra-thick running surfaces: .125-inch marine aluminum on the bottom, .100-inch on the sides. Baked urethane paint makes this one of the better-looking boats of the aluminum fleet.