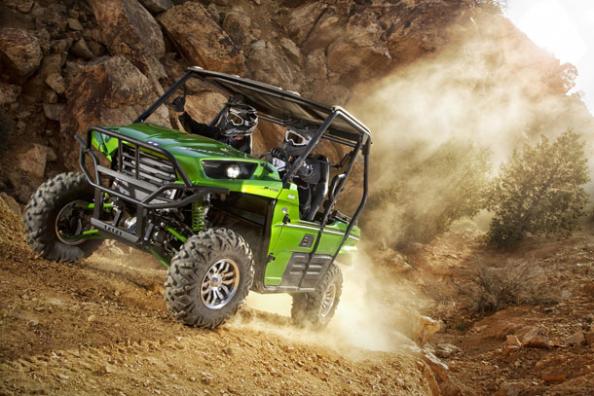 The Kawasaki Teryx has been a popular choice in the SxS market since its introduction back in 2008. For 2014, Kawasaki redesigned the original two-seater Teryx to roll on the same chassis as the Teryx4, a four-seater with a redesigned chassis, longer wheelbase, and enhanced creature comforts like Electronic Power Steering (EPS) that was released in 2012.

The 2014 Teryx is considered a sport/utility SxS rather than just targeting the pure sport, or pure utility market. Jumping into the sport/utility category of SxSs is risky business; mostly because the vehicle must be designed to perform two completely different tasks well: the suspension needs to be plush enough to pamper the passengers at slow speeds without running out of suspension travel at high speeds. After spending a considerable amount of time behind the wheel of the 2014 Teryx, Kawasaki has definitely gotten it right. And the Teryx is now more comfortable, capable, and competitive than ever before.

The 2014 Teryx is powered by a more potent version of Kawasaki’s venerable 90-degree V-twin engine. Marketed as an 800cc (it’s technically 783cc), the new engine is 26 percent more powerful, has 12 percent more torque, and is 20 percent more fuel efficient than the previous 750cc engine. Kawasaki’s off-road V-twins have earned an impressive reputation for being both powerful and reliable. The new 800cc power plant certainly takes this machine to the next level. Electronic fuel injection produced effortless starts, even after hibernating in sub-zero temperatures in my garage during the “Polar Vortex” in the Northeast this winter. Throttle response was crisp and the increased power was noticeable, especially when swatting the GO pedal.

The Teryx utilizes a Continuously Variable Transmission (CVT) with high and low range, as well as neutral and reverse. In addition to the typical drive clutch and driven clutch found in all CVTs, there is a centrifugal clutch mounted between the crankshaft and drive clutch. The centrifugal clutch helps immensely with smooth clutch engagement, especially when crawling through tight, technically terrain, or when getting on and off the throttle quickly. The Teryx also features an electronically locking front differential, which is actuated via a dial on the dashboard.

Independent front and rear suspension paired to all-new Fox Podium shocks delivered a comfortable ride and sporty handling over all types of terrain.

Due to the added length of the chassis and the lengthened wheelbase, extra room behind the seats resembles what is typically found in an extended cab pickup. One of the more obvious and innovative changes is the new sealed storage boxes molded into the floor behind the seats, which have a total volume of 182 liters. To put that into perspective, one of the compartments was large enough to swallow my fully loaded backpack with ease. The dump bed is able to haul 600 pounds and dumps easily from either side of the bed, although the dump handle was tricky to find at first.

From a safety standpoint, EPS — now standard on 2014 Teryx models — is probably the greatest safety enhancement seen in the industry in recent years, especially on machines like the Teryx that weigh in excess of 1,550 pounds.

The seats and overall feel of the cabin was very comfortable, even for my lanky frame. The seats are adjustable, but requires tools. With a plethora of room behind the seats, a reclining seat back would be an inexpensive, premium feature Kawasaki should think of adding as well. During my testing, the standard doors did an excellent job of keeping water and mud out while also keeping arms and legs in. The new bodywork is aggressive looking and helped prevent the tires from slinging mud into the cab.

Perhaps the 2014 Teryx’s most important selling point is its three-year limited warranty, which is the longest in the industry. With three years of protection and a documented history of bomb-proof reliability, the 2014 Kawasaki Teryx should prove to be a serious new competitor in the constantly evolving world of SxSs.

Hits:
– 783cc 90-degree V-twin engine is 26% more powerful, has 12% more torque, and is 20% more fuel efficient than the previous engine.
– Fox Podium shocks with selectable compression dampening provide a high quality ride and are rebuildable.
– A long standing reputation for ruggedness and reliability.
– Three-year limited warranty is the longest in the industry.
– Rear storage boxes make a great place to store and secure items that would otherwise bounce out of the bed.
– All Teryx 800 models come standard with Electric Power Steering(EPS)